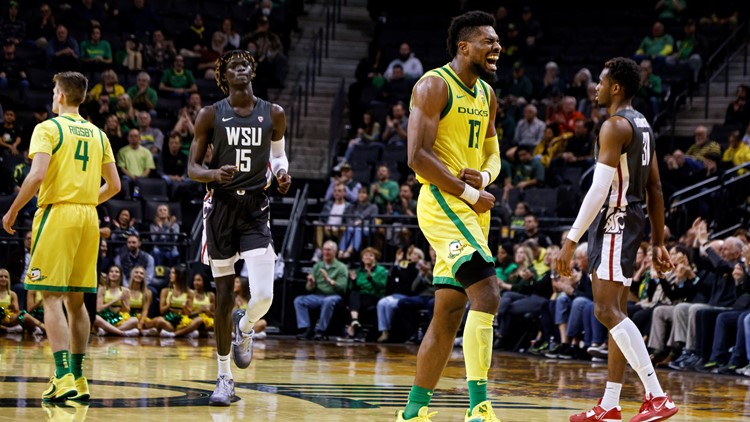 EUGENE, Ore. (AP) — N’Faly Dante scored 16 of his 22 points in the second half as Oregon capitalized on a 13-2 run to start a 74-60 win over Washington State in Thursday’s Pac-12 conference opener Night.

The game was played within four points in the first 26 minutes. TJ Bamba had a dunk and a three-point game to put the Cougars 44-40 ahead. Will Richardson reclaimed those points in a similar fashion, and after a final lead at Washington State, the Ducks scored eight points in a row. A layup by Dante gave the Ducks a 53-46 lead with 11:08 to play.

Starting near the five-minute mark, Dante made three quick baskets, the last two dunks, and the score was 68-54. The Cougars went six minutes without a basket and missed five shots with four turnovers.

Richardson had 17 points for the Ducks (4-4) and Quincy Guerrier had 12. Richardson had eight assists and three steals and Dante had seven rebounds.

Mouhamed Gueye scored 19 points for Washington State (4-4), which averaged 11 3-pointers but finished 3 of 14 behind the arc. Bamba added 14 points but missed his only 3 and ended up with 56.5%. Jabe Mullins, a 57% long-range shooter, missed the game with a knee problem.

The great man brings it to the rim himself and throws it down by force!

The first half ended stuck at 32 with nine draws and five lead changes. Almost every stat was a tie, but Gueye bagged 17 points for Washington State on 7-of-9 shooting. No other cougar had more than four points.

Gueye only got three shots in the second half while Dante was 8 of 10 for the Ducks.

Washington State travels home on Sunday for a game against Utah, which defeated No. 4 Arizona on Thursday. Oregon goes to the 21st UCLA on Sunday.