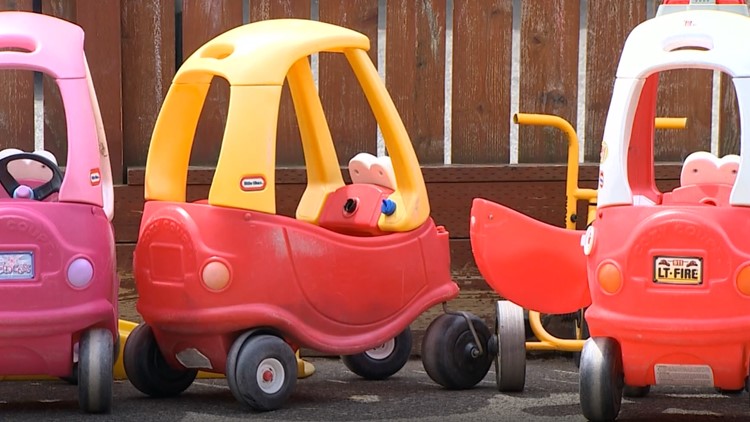 A light rail service that will eventually connect west Seattle to downtown could improve transportation, but it could be detrimental to one of the area’s large daycare centers.

SEATTLE — The long-awaited light rail service that will eventually connect West Seattle to downtown could ease the community’s transportation problems. But it could be detrimental to one of the area’s large daycares.

Alki Beach Academy is a daycare with plans to more than double in size to reach a licensed capacity for 300 children, but that expansion may be thwarted by another — Sound Transit’s effort to expand light rail service to West Seattle .

“We have followed the Sound Transit Project for as long as they have carried out their planning,” said Jordan Crawley, associate director of Alki Beach Academy.

Crawley said he read Sound Transit’s lengthy draft environmental impact statement to learn how the daycare could be impacted. He said the routes listed as Alternative DEL-5 and Alternative DEL-6 produced the worst results and required Alki Beach Academy to be demolished.

In an email, a Sound Transit spokesperson noted that the business section of the EIS draft states: “Alternate DEL-5 and Alternate DEL-6* would have the most business shifts. These alternatives would replace a business park, gym and other retail and local service businesses.”

“If two of the six alternatives ousted an entire commercial center with a large childcare center, you’d think some of that reach would end up down here, but that’s not the case,” he said.

He said he’s heard a lot more from concerned parents who depend on the daycare.

“It’s our support system. It’s everything we could ever ask for,” said Tim Tilbury, who has two children.

The possibility of the daycare being ousted from the Delridge area also worries Kanchan Schindlauer, who has two children.

“We couldn’t function. I couldn’t run a business. My husband couldn’t work full-time without the support they offer us,” Schindlauer said.

It’s the kind of support that’s been hard to find. State data estimates that only 37% of child care needs are met in King County.

But transportation has also been a source of problems in the community since the West Seattle Bridge has been out of service for more than two years. Sound Transit builds a tunnel and begins light rail, which is what many West Seattle commuters have been asking for.

“It’s necessary, but I don’t know at what cost,” Tilbury said.

“Companies like this need to be saved. These are businesses that allow the rest of the community to function,” Schindlauer said.

For the day care center, the expansion plans remain in limbo while they wait to see which direction the Stadtbahn route will take.

“The transport has to come here. Our only hope is that when that happens, we’re here to serve the community,” Crawley said.

Sound Transit said they will work with all the companies and individuals displaced once the project to be built is selected.

“There is no upper limit on moving expenses that are actual, reasonable and necessary,” a Sound Transit spokesman said.

There is a cap on the cost of recovery, which is outlined in the relocation guide.

Seattle City Council will weigh before Sound Transit’s board of directors votes on a final route.

This final decision is expected next year. Sound Transit plans to begin service in West Seattle in 2032.

Honey buns that break free of the vending machine

The Philosopher Kings of North Carolina

‘The Young And The Restless’ Spoilers: Fans React To Victoria Newman’s (Amelia Heinle) Scheme And What Ashland Locke (Robert Newman) Will Do