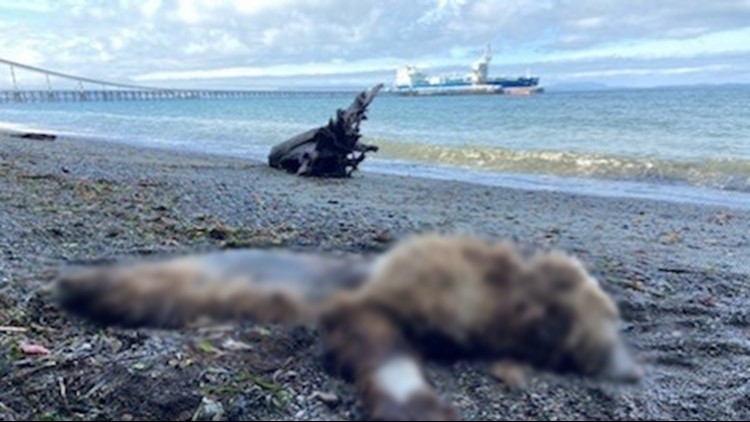 Bear carcass found at Cherry Point. Grizzly bears are uncommon west of Washington but are known to swim from British Columbia to Vancouver Island.

– A dead grizzly bear washed ashore in Whatcom County near Cherry Point on June 17, according to the Washington Department of Fish and Wildlife (WDFW).

WDFW said the male grizzly bear had been dead for some time. The corpse was decomposing and there was no clear indication of the cause of death.

According to WDFW, grizzly bears live in the North Cascade mountains and are considered threatened under the federal Endangered Species Acts in 48 states.

WDFW says grizzly bear populations are very small in Washington state due to habitat fragmentation, caused by human settlements and highways. This species is known to live in remote areas of the Selkirk Mountains and elsewhere near the northern border of Washington.

However, grizzly bears are known to live in the Coast Ranges of British Columbia, near Vancouver and Squamish, and have been recorded swimming from mainland Canada to Vancouver Island.

WDFW said in a statement it was possible the bear was washed down Whatcom County during recent flooding.

Biologists sampled the bear’s carcass for genetic analysis and the incident was reported to the US Fish and Wildlife Service. WDFW is working with Fish and Wildlife and Canadian partners to figure out where the grizzly bear might have come from.

Warning: Included below is an image of a dead grizzly bear that washed up on a beach near Cherry Point

‘Rings of Power’ Hasn’t Premiered Yet, But This Actor Is Already Lord of the Big Fits

Should good cooks use fresh or canned cherries for cobbler?

Can Ketamine Therapy Help With Depression? Yes, But It’s Expensive.

George R.R. Martin Reveals He Was “Out of the Loop” Long Before the Hated ‘Game of Thrones’ Finale