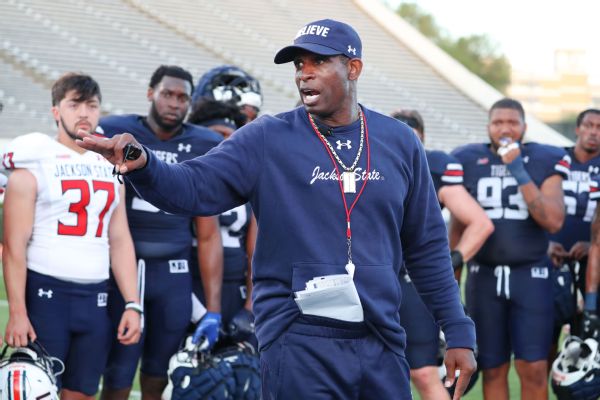 Jackson State head coach Deion Sanders said he will not allow his players to leave their hotel this weekend when they play Texas Southern in Houston, where rapper Takeoff, 28, was shot and killed in a bowling alley early Tuesday morning.

Sanders said family members and friends who want to see players before Saturday’s game need to visit the team’s hotel.

“I’m just sick of the people who have an impact on you consistently leaving us: These are our rappers,” Sanders said via video to accompany his message. “Takeoff was murdered at a craps game in Houston, where we’re going. So that precludes you all leaving the hotel.

Along with Quavo and Offset, Takeoff, whose real name was Kirshnik Khari Ball, was one-third of Migos, who had several chart-topping hits over the past decade, including “Bad and Boujee” and “Fight Night.”

Takeoff was a sports fan who joined his group to perform with Pharrell at halftime of the 2018 NBA All-Star Game. Last week, Quavo and Takeoff released their first album as a duo separate from Offset, Only Built for Infinity Links.

Migos had ties to a variety of professional athletes, most notably Atlanta Hawks star Trae Young, who tweeted Tuesday that he was shocked by the news of Takeoff’s murder.

Quavo and Takeoff were reportedly at a Houston bowling alley around 2:30 a.m. Tuesday when gunfire rang out and Takeoff was hit and killed. Houston police officers told reporters they are investigating the murder.

On Tuesday, Sanders urged his players to be mindful of their surroundings and relationships as they prepare for Saturday’s away game.

Jackson State hosted ESPN’s “College GameDay” on Saturday before there was a 35-0 win over Southern to take his record to 8-0.

“I don’t want you all playing this stupid game because you are all valuable to your families, friends and loved ones and you are valuable to us,” he said. “Let’s think about it. Let’s pray for the families.”

WSU to face off against de Laura, Wildcats this Saturday