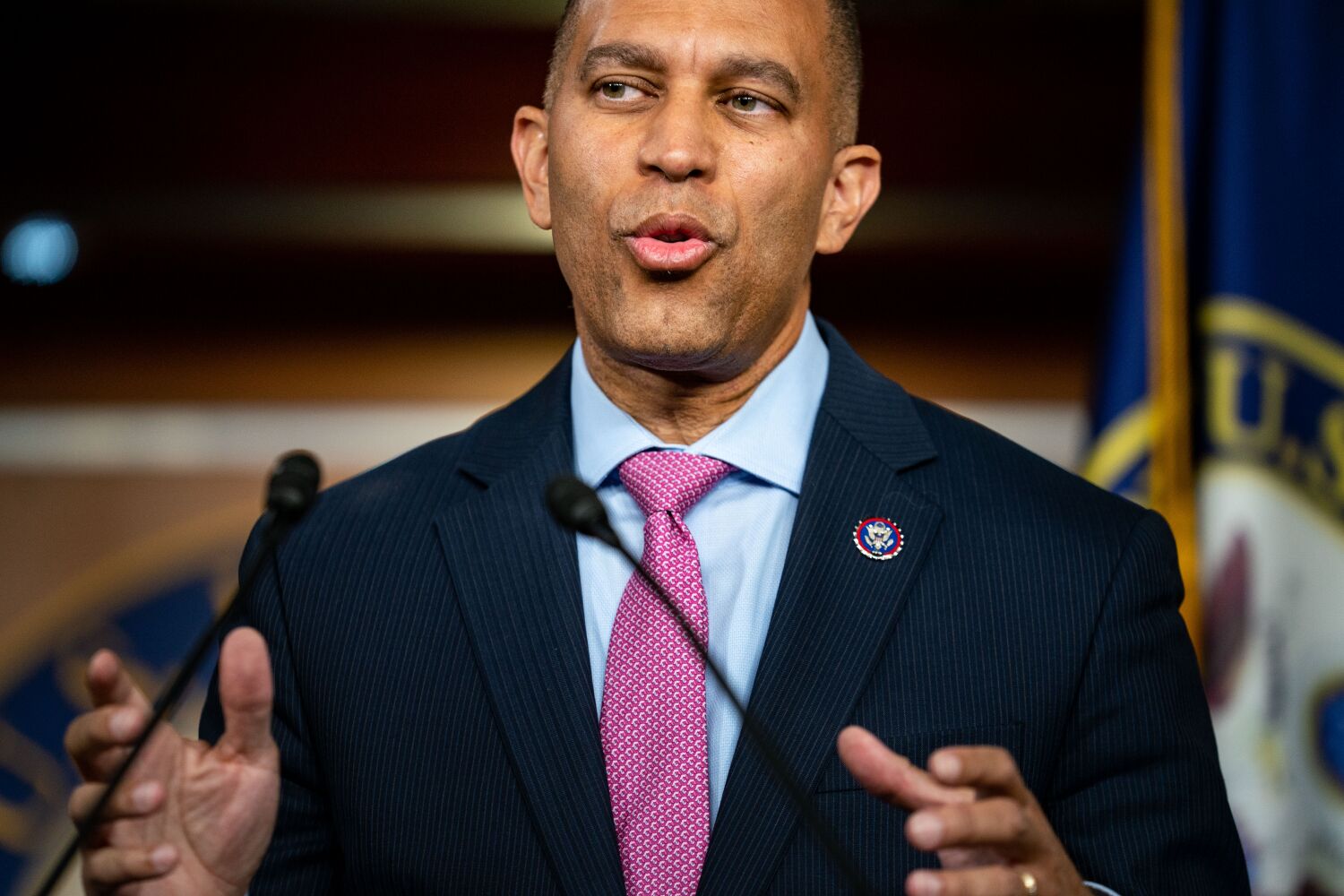 House Democrats on Wednesday tapped Rep. Hakeem Jeffries (DN.Y.) to lead them in the next Congress and elected California Rep. Pete Aguilar (D-Redlands) to chair the House Democratic Caucus.

Jeffries’ historic selection as the new minority leader means he will replace Rep. James E. Clyburn (DS.C.) as the ranking African-American member of the House of Representatives in January and become the first black legislator to lead either party in the chamber.

In addition to Aguilar, Jeffries is expected to be inducted into senior leadership as a minority whip by Rep. Katherine Clark (D-Mass.).

Clark becomes the second woman in Congress history to act as a whip, tasking her with controlling members’ viewpoints on legislative issues and pressuring them to stick to party line when necessary.

Aguilar will succeed former Los Angeles Rep. Xavier Becerra and New Jersey’s Robert Menendez as the third Latino member to chair the Democratic Caucus. Becerra is now Secretary of Health and Human Services, while Menendez is now a member of the Senate.

In this post, Aguilar will chair caucus meetings and hold weekly press conferences. The position is limited to two consecutive terms, but Aguilar would be poised to become the majority whip when Democrats retake the House of Representatives in 2024.

This group of octogenarians will continue in service through the next convention, although only Clyburn will remain in the lead and serve as the Democratic vice chairman.

On Tuesday night, however, the Democratic Steering and Policy Committee voted unanimously to give Pelosi the honorary title of Speaker Emeritus.

Brooklyn-born Jeffries, 52, was an attorney before serving six years in the New York State Assembly, which he left in late 2012 after winning a congressional seat.

Despite being a member of the Congressional Progressive Caucus, Jeffries split from the “hard left” faction of his party in an interview with the Atlantic last year.

Rep. Pramila Jayapal (D-Wash.), chair of the Congressional Progressive Caucus, told reporters Wednesday that she met with Jeffries and supports his leadership.

“I wanted to make sure that relationship was clear from the start: that progressives are here to help govern, to push the best ideas forward, and what I’ve heard really encouraged me,” she said. “I’m looking forward to a really good relationship.”

Jeffries, Clark and Aguilar will lead the House Democrats with the blessing of the outgoing leadership team and no individual challengers. But members say they collectively face the challenge of succeeding a historic leader in Pelosi and her leadership team.

“People will see what a miracle worker she was, how difficult this job is, how it requires an encyclopedic knowledge of everyone’s wants and needs, what they really want and what they really need,” Schiff said.

“People will be open to giving him a real chance to lead and unite the faction,” he said. “However, it quickly becomes clear how much Nancy Pelosi has done for this caucus and how difficult this task will be.”

Jeffries’ supporters believe he’s up to the task. Retired Rep. GK Butterfield (DN.C.), a former chairman of the Congressional Black Caucus, said he has known Jeffries since his first day in Congress.

Butterfield predicted that Jeffries “will go down in history as one of the greatest Democratic leaders in the House of Representatives.”

“He’s a man of impeccable character,” Butterfield said. “He is exemplary. He also adds to that a range of political skills that are second to none. He has the ability to sit in boardrooms and participate in high-level political discussions and contribute immeasurably. And he also has the ability to relate to the average American, those who are back home in our districts and working in hard-working positions in their communities every day. He has a wide range of talents.”

Starting Jeffries as leader might prove a little easier in the minority, where Democrats will no longer control the legislative agenda.

Nature plays a key -- along with Putin -- in documentaries

Op-Ed: Independents may not like Biden, but they abhor Trump