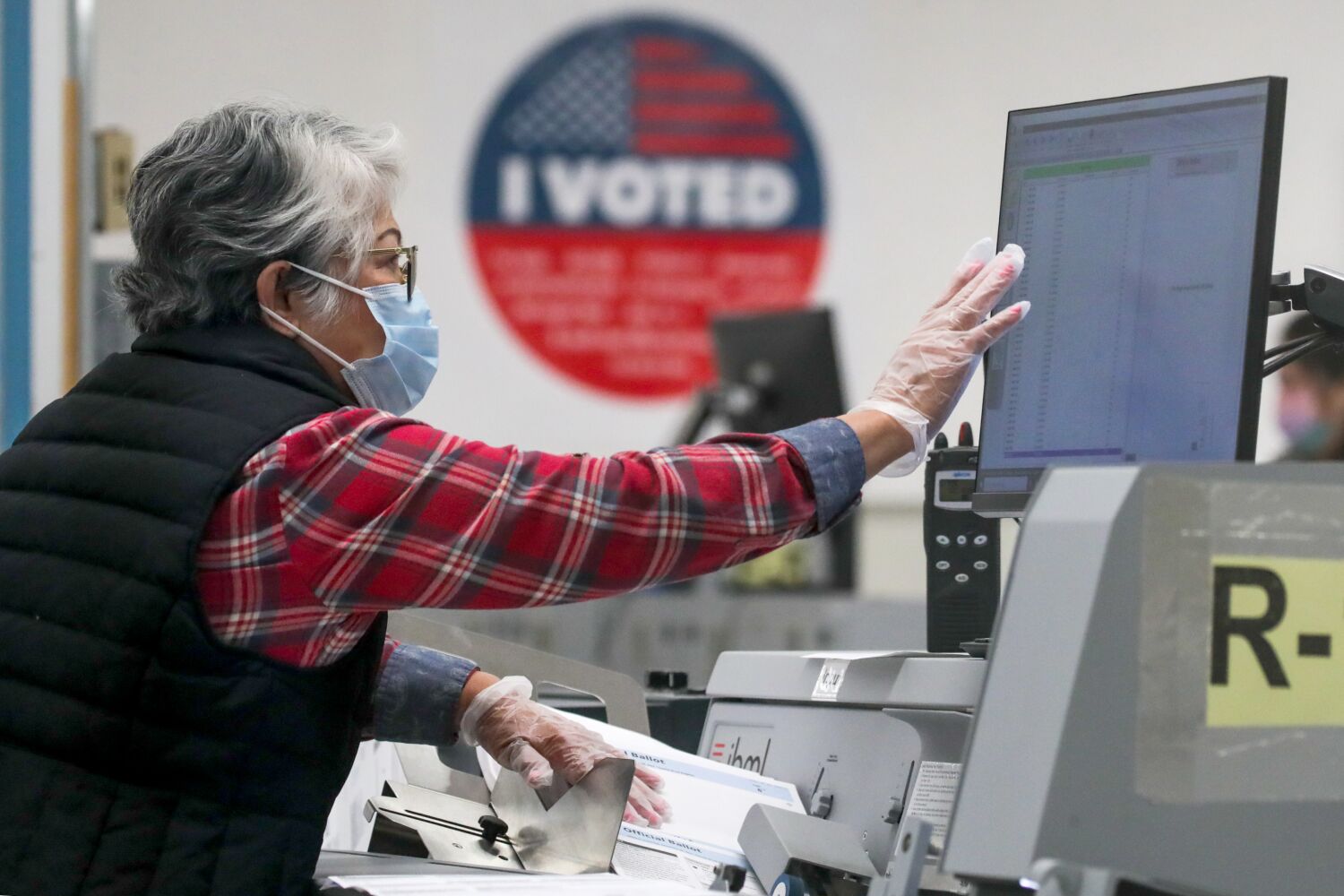 The battles for California’s most competitive congressional races have effectively ended in a tie after months of campaigning and more than $100 million in publicity. Neither Democrats nor Republicans have yet ousted an incumbent or broken new ground in their opponent’s territory — though with a handful of unresolved races, a glimmer of those hopes remains.

Each party in this cycle has had higher ambitions than a continuation of the status quo. Democrats saw California as a beacon, a rare opportunity to go on offense in a season that seemed increasingly threatening. Republicans, confident of an easy House majority takeover, sensed an opportunity to up the ante in the state’s blue-tinted districts.

Though none of the best-case scenarios materialized, both sides say there have been bright spots in the standoff.

For Democrats, it triumphed over the factors stacked against them: President Biden’s underperforming approval ratings, which even went underwater in deep blue California, persistent inflation, and precedents pointing against the party holding the White House.

Republicans say they have been able to capitalize on the opportunities left by the resigning Democrats, helping incumbents fend off right-wing challenges in the primary and tying up Democrat dollars with their ambitious forays into liberal territory.

“We expanded the map outwards. We’ve been taking bets on some hard-to-win seats that Biden won by double digits — we won most of them, and others came very close,” said Calvin Moore, spokesman for the Congressional Leadership Fund, the McCarthy-affiliated super PAC . “As a result, Democrats have been pushed out of very tight contests — races they likely could have won — while giving us a chance to win additional seats.”

The national trends that allowed Democrats to retain the Senate and limit the GOP to a single-digit majority in the House of Representatives were evident in California’s midterm election, said Dan Schnur, who teaches political communications at USC and UC Berkeley.

“The election was ultimately a decision about which issue was more important – inflation or abortion,” said Schnur. “And just as we’ve seen in other parts of the country, this election wasn’t a referendum on the incumbent president, it was an election between Joe Biden and Donald Trump.”

In California, however, that dynamic was shaped by state idiosyncrasies, which provided some stark contrasts to the statewide results at the halfway point.

The Supreme Court decision overturning federal protections for abortion rights roiled political sentiment here, as elsewhere. Pro-choice advocates responded with Proposition 1, an initiative to enshrine abortion protections in the California constitution. In the end, it was the top voter in the poll, beating Gov. Gavin Newsom and Sen. Alex Padilla.

The success of the measure was partly due to this what proponents call “Surge Democrats.” who would not have voted if not for the abortion issue. But it also clearly appealed to voters from across the political spectrum, including people who voted for down-ticket Republicans. As a result, the Democrats in California’s congressional election didn’t experience the same voting boost as in states where abortion rights are more threatened, such as Michigan.

“The question before [voters] was: “Do you want abortion rights to be protected?” The answer was overwhelmingly yes,” said Jodi Hicks, president of Planned Parenthood California. But, she said, advocates must continue to emphasize that even though access to abortion has protections in the state, “without federal protections, we are always one national ban away from losing our rights.”

While Trump’s specter still hung over the party as a whole, California Republican politicians kept Trump at a greater distance than those in other states.

“This is the type of candidate recruitment that we need to look at nationally as a party,” said Tom Ross, a Republican adviser who advises House GOP Chairman Kevin McCarthy. “I think that’s what we get here in California. … We don’t get that at national level.”

He pointed to a quartet of Republican incumbents — Reps. Young Kim and Michelle Steel of Orange County, Mike Garcia of northern Los Angeles County, and David Valadao of Central Valley — as the types of candidates his party should promote nationally.

Democrats saw these members as tempting targets as they braced for losses elsewhere. Under the new congressional map drawn during the new district process last year, nearly half of the state’s GOP incumbents saw their districts turn bluer. Steel, Valadao and Garcia seemed particularly vulnerable on paper.

Given the composition of the districts, any Republican further to the right of the incumbents would almost certainly lose the seat. During the primary, the Congressional Leadership Fund spent nearly $1 million on advertising to protect Kim, who faced a right-wing challenger. The group also spent around $500,000 on Valadao, who was challenged by two GOP candidates who were upset over his vote to impeach Trump.

Ultimately, Kim, Garcia and Steel easily won re-election. Valadao has a five-point lead over Democratic Rep. Rudy Salas, although that race was not declared by the Associated Press.

The incumbents’ victories illustrate how our severely polarized political landscape is leading to less wild swings between parties, said Lynn Vavreck, a political scientist at UCLA.

“To me, that reflects how solid and divided and divided this moment is in politics in America. It’s not just California, it’s happening everywhere,” Vavreck said.

As a result, McCarthy’s intended glide path to the speaker’s hammer was far more difficult. Without a red wave, the Bakersfield Republican now faces a narrow, tenuous majority and a rocky road to speakership. Still, it was a victory in his home state – Garcias in the 27th District – that won a majority in the House of Representatives.

This race was one of the biggest missed opportunities for Democrats. Garcia had won by just 333 votes two years ago, and his constituency became even less Republican after the constituency re-election. His objection to the full count of the 2020 election vote risked angering his constituents, and national Democrats signaled early on that they planned to capitalize on it.

Instead, neither the Democratic Congressional Campaign Committee nor the House Majority PAC, the super PAC affiliated with Speaker Nancy Pelosi, spent money on television programming in the expensive Los Angeles market. The lack of air support handicapped Garcia’s opponent Christy Smith and other Democratic candidates in the LA area who were trying to oust the GOP incumbents.

The cost-benefit analysis is nothing new, said Bill Carrick, a veteran strategist who recalled a similar calculus when he worked for the Democratic Congressional Campaign Committee in 2000.

“You always get to that last thing where you’re like, ‘Do we really want to buy time in the LA media market for conventions because it’s going to cost a fortune,'” Carrick said.

Another closely watched race — California’s 13th District in the Central Valley — went uncalled Saturday. Voters in the open district opted for Biden by 11 percentage points and Democrats have a significant registration advantage. Still, GOP candidate John Duarte, a farm owner, is neck and neck with Democratic Rep. Adam Gray. If Duarte wins, it will be the GOP’s most successful foray into the state’s blue territory this cycle.

Despite Republican intervention, however, Democratic activists are confident that their party will reap the full benefits of the newly drawn districts in the next election cycle.

“Redistribution is a long-term game, and I think these counties show that the Democrats are going to have a much stronger outcome in the presidency years,” said Bill Burton, a former White House spokesman for President Obama who now lives in California. “If I were Kevin McCarthy, I wouldn’t be unpacking every single box in the speaker’s office. I think his tenure will be short-lived.”

Both parties also found advantages in some of their closest defeats.

“You have two white males who are not articulating pro-choice, socially moderate views,” Spillane said of the GOP challengers. “That makes it a more demanding race. The fact that they were still close is a source of encouragement to me. In the long run I think we can win those seats.”

“The congressman always knew it was going to be a competition,” said Jason Gagnon, a spokesman for Calvert. “Any time you have a race that closely divided, one way or another it’s only going to be a few thousand votes.”

Rollins’ strong performance earned him praise from fellow Democrats, who widely expect him to run for the seat again in two years’ time.

“We had the best midterm performance that any challenger has ever had and I think he’ll be beaten 24,” Rollins said. Rollins stopped short of committing to a run, citing a former governor he worked for fresh out of college.

https://www.latimes.com/politics/story/2022-11-21/california-role-2022-midterm-elections Democrats, Republicans had highs and lows in California in 2022

The Peculiar Challenges of Crypto Regulation