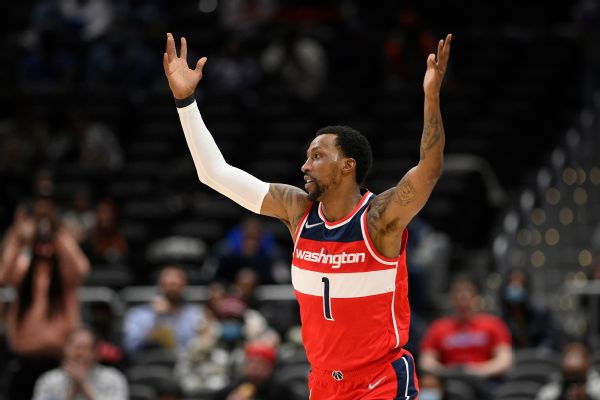 The deal, which begins with the 2023-24 season, includes a player option, Paul said.

Caldwell-Pope had entered the final year of his contract, which will net him $14 million. The guaranteed money in the deal will take Caldwell-Pope’s career earnings to $120 million.

Caldwell-Pope, 29, joined the Nuggets in a trade with the Washington Wizards two weeks ago and is expected to be a key 3-and-D performer to join MVP Nikola Jokic, Jamal Murray and Michael Porter Jr.

Caldwell-Pope is expected to benefit from Jokic’s great passing ability. He’s a 41% catch-and-shoot 3-point shooter over the past two years and ranks in the top 10 out of 59 players who attempt 500 of those shots, according to ESPN Stats & Information Research.

Caldwell-Pope shot 44.8% at open 3-pointers with Washington last season, which put him in the top 10 players with 150 tries, according to ESPN Stats & Information.

Nuggets general manager Calvin Booth acquired Caldwell-Pope in the trade that sent Will Barton and Monte Morris to Washington. In Caldwell-Pope’s first full season with the Wizards, he started in 77 games, averaging 13.2 points, 3.4 rebounds and 1.9 assists per game.

In his career — including stints with the Detroit Pistons and Los Angeles Lakers — Caldwell-Pope has averaged 11.6 points, 3.1 rebounds and 1.7 assists per game.

Quavo on His Future With Migos, Finishing High School, and Finding His Long-Lost Brother