Deontay Wilder held the WBC heavyweight title for five years from 2015 to 2020. He made his pro debut in 2008, beating or stopping his first 32 opponents. Only two men have managed to go the distance with him so far – Tyson Fury and Bermane Stiverne.

While he reigned as champion, Wilder was considered the hardest puncher in the sport. Of his 42 wins, 41 have come by KO – many by a single punch. However, his style was highly unorthodox, leading to his technical boxing abilities being questioned by many.

Check out the highlights from Deontay Wilder vs. Luis Ortiz here: 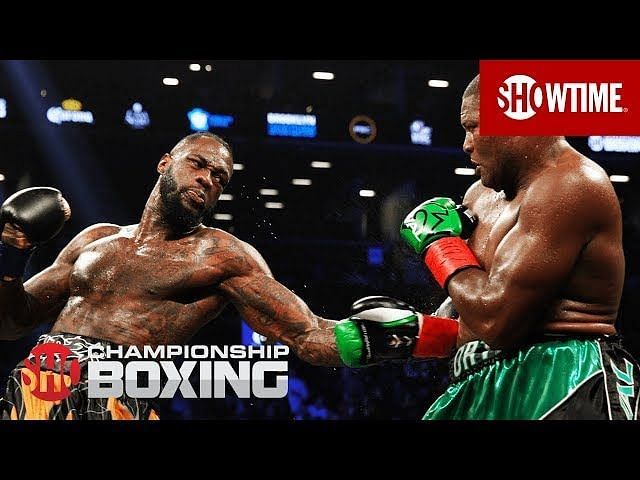 With a knockout-to-win ratio of over 91% and a record of 42-2-1, it’s clear that Wilder is an effective fighter. Here’s a breakdown and analysis of The Bronze Bomber’s boxing style.

Deontay Wilder is a power puncher and racket. He often seems caught off guard when combinations are thrown. Generally though, he manages to overpower opponents by overpowering them with a charge or landing the perfect power shot.

The first thing that springs to mind for many when they think of Wilder is his whip-like upper hand on the right. Although the punch can seem like a show of pure strength, sometimes it’s a well-crafted tool. The punch shares striking technical similarities with the overhand right throw of perhaps the greatest boxer of all time, Sugar Ray Robinson.

Sugar Ray Robinson the greatest welterweight of all time. Robinson’s welterweight record of 128-1-2 84 KOs, he had more KOs than most fighters have fights these days. His hand speed, power and footwork were second to none! #bestwelterweightever

Sugar Ray Robinson the greatest welterweight of all time. Robinson’s welterweight record of 128-1-2 84 KOs, he had more KOs than most fighters have fights these days. His hand speed, power and footwork were second to none! #bestwelterweightever

While he doesn’t have the same technical ability as Robinson elsewhere, the way he charges in to put his bodyweight into the punch is very similar. Wilder also uses his long range to place shots from afar. He plants his feet, jabs for reach, and then follows with a heavy right hand.

As Boxing Life notes in their YouTube breakdown video, Wilder also tends to use feints to throw his opponents off or break their cover. By using a deflection, Wilder ensures that the recipient of the punch cannot properly prepare for the impact. This ensures that the shots are more effective.

Wilder’s effectiveness relies heavily on throwing his bodyweight into his attacks. Whether it’s using his weight for a single punch or simply throwing himself into his opponent with a twirl like he did in the rematch against Stiverne, Wilder uses his size effectively.