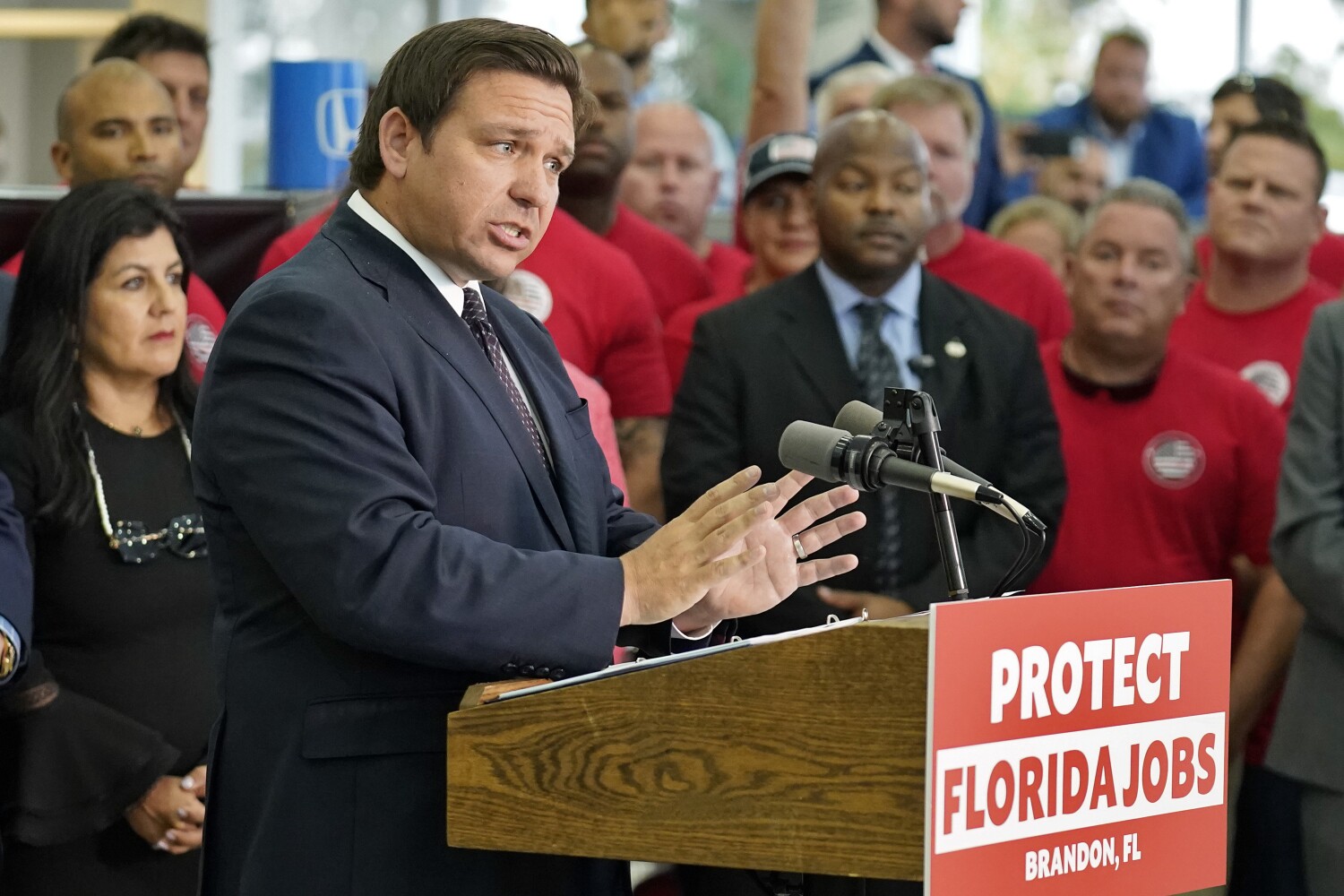 Ever since the advent of COVID-19 vaccines early in 2021, the Special Olympics organization has been in the forefront of promoting their benefits.

The organization created a special page on its website with vaccination information and resources, urging “everyone who has access to the COVID-19 vaccine to get vaccinated.”

The page informed users that the vaccine would help protect them from getting COVID, prevent serious illness if they became infected, and help protect people around them.

The page reported that vaccination is especially urgent for people with intellectual disabilities, including Down syndrome, Fragile X syndrome and autism — the core of the organization’s community of participants — who are especially vulnerable to COVID-19.

The organization also issued a poster debunking many of the most widespread myths about the COVID vaccine. And it mandated that everyone participating in its USA Games, which began Sunday in Orlando, Fla., be vaccinated.

That whole effort collapsed spectacularly Thursday, when the Special Olympics abruptly canceled the vaccine mandate for the Orlando games. The decision wasn’t based on any reassessment of the health risks of the vaccine, or of the hazards of participating in the games without vaccination.

It was entirely a response to an astonishing threat from the state of Florida to fine the games $27.5 million for imposing a vaccine mandate.

The administration of GOP Gov. Ron DeSantis calculated the fine based on a state law penalizing businesses in Florida $5,000 for each vaccination mandate. Since it required proof of vaccination from each of the games’ 5,500 athletes and coaches, that came to $27.5 million. (Jay O’Brian of ABC News was the first to report the threat.)

In announcing its capitulation to this remarkable act of legal extortion, the Special Olympics organization attributed its decision solely to “the Florida Department of Health’s interpretation of Florida law.”

The organization didn’t mention in its statement that it still recommends vaccination, so participants and their families might assume that the Special Olympics organization no longer cares about vaccination.

Special Olympics Inc., the parent organization of the Orlando games, could have used this opportunity to reiterate why vaccination is especially important for those in the intellectual disabilities community, and why it imposed the vaccine mandate in the first place. It did not. Instead, the group handed DeSantis a victory over good sense and sound public health policy, and DeSantis ran with it.

For the record, the organization says it reaffirms “that our policies, including regarding COVID vaccination, are based on the best medical evidence” and “believes vaccines are beneficial in preventing the spread of COVID-19 among our athletes and the population as whole.”

Several questions need to be answered about this decision, and several lessons to be drawn from it. The latter all point to the sheer thuggishness of the DeSantis administration, but also to why the Special Olympics organization caved to DeSantis so meekly.

At a press conference announcing the organization’s climb-down, DeSantis preened at having prevented “marginalizing some of these athletes based on a decision that has no bearing on their ability to compete with honor or integrity.” Of the possibility that the presence of unvaccinated participants might heighten the health risks of others, he was silent.

DeSantis was accompanied at the press conference by a family that has been fighting the vaccine mandate since it was informed of the rule in April. But not all families are comforted by the change in policy.

“My son, a special needs Special Olympian, cannot catch covid,” Brian Cheek, a North Carolina father, wrote on Twitter. “It will kill him.” Cheek wrote that it is “very disappointing that the Special Olympics do not care for their athlete’s health.”

It’s possible that the Special Olympics were trying to appease a bully, but that would be a gross miscalculation.

Appeasing bullies never works, and appeasing DeSantis in particular is a mug’s game. He’s emboldened by any sign of weakness in his opponents, as the Walt Disney Co. learned when it chose to remain silent about a Florida measure suppressing the teaching of gender issues in public schools — the notorious “Don’t Say Gay” law, as its critics call it.

When Disney executives were finally goaded by employees into speaking out against the bill, DeSantis made the company a partisan target.

The Special Olympics played nice with DeSantis from the outset, naming him and his wife honorary chairs of the Orlando games. Then he turned around and hit them where it hurts.

He hasn’t even lifted the fine, which is still in effect despite the organization’s capitulation.

“We are in process of following all necessary procedures to make the formal request to Florida officials for the fine to be lifted,” organization spokeswoman Rebecca Simon told me by email. The fine “would devastate the global organization,” she said.

It appears DeSantis and his wife are still the honorary chairs, though why that should be so, given the threat to the games, is inexplicable. Their positions are “purely ceremonial,” Simon says.

We’ve reported before on DeSantis’ habit of imposing his will on the most vulnerable members of society largely for the purpose of political grandstanding as he positions himself for a possible run for the Republican presidential nomination in 2024. (He typically runs second to former President Trump in straw polls of GOP voters.)

DeSantis has repeatedly attacked the transgender community, most recently by moving to end Medicaid coverage for the community’s medical care and treatments.

DeSantis often gets his way by bullying, as happened in March, when he publicly scolded seven high school kids for wearing masks when they were assembled as background decor for a DeSantis press conference. He called mask-wearing “COVID theater,” even though there’s extensive evidence that wearing masks helps to slow the spread of this deadly disease.

DeSantis’ COVID policies, including the ban on vaccine mandates that he signed into law in November, have made Florida an exemplar of the folly of challenging the science of COVID prevention.

Last week, DeSantis held a public budget-signing event that served as a convenient digest of his political approach.

As reported by the South Florida Sun-Sentinel, his actions included vetoing appropriations for a new public cancer treatment center, for an environmental and oceanographic research facility, for 83 new employees to handle a backlog of concealed weapons permits and screening the applicants, for access for low-income women to a reversible contraception, for Florida public broadcasting stations and for transitional housing for LGBTQ youth in Orlando.

That brings us back to DeSantis’ ruthless treatment of the Special Olympics.

The notice of the state fine was exquisitely timed to back the organization into a corner. The Special Olympics organization, which announced the vaccine requirement for the Orlando games Jan. 26, says it was first informed of the fine May 27, which would be nine days before the games were scheduled to begin. The formal notice of the $27.5-million levy came only on Thursday, or three days before the opening.

In either case, obviously, that left no time for the organization to move the games out of Florida. Indeed, planning for the event had been underway for some four years when Florida enacted its law banning vaccine mandates. “After persevering through a global pandemic to deliver on our promise to athletes across the country for top-notch national competition, it was not deemed feasible to relocate the event to another host city,” Simon says.

The size of the fine seems to suggest that it was designed for maximal pressure. It was based on the total number of participants in the games, even though many, if not most, were probably already vaccinated and for whom plainly the mandate was irrelevant.

The $27.5-million figure comes to more than 25% of the organization’s asset base as of the end of 2020. That makes it a particularly heartless attack on a nonprofit organization with one of the more selfless and uplifting missions in America. That’s not even to mention the estimated $60 million in economic impact the weeklong meet is expected to bring to the Orlando region.

The Special Olympics organization isn’t blameless in this disgraceful affair. None of the group’s officers or board members has spoken out, as far as we can determine, about the virtues of vaccine mandates or the perils of forbidding them.

As with other healthcare initiatives in Florida, this one bears the signature of Joseph Ladapo, the state’s surgeon general. We’ve reported on Ladapo before. His policies are a threat to public health. As the Orlando Sentinel’s editorial board has observed, Ladapo is a “COVID crank.” He questions the safety of COVID vaccines, despite overwhelming evidence that they are safe and effective.

He dismisses the vaccines because they don’t halt the transmission of COVID, even though the medical community has never asserted that they do so — what they achieve generally is to reduce the severity of COVID infection, which itself will tend to slow the disease spread.

At the event at which DeSantis introduced him to the press, he said, “The state should be promoting good health, and vaccination isn’t the only path for that. It’s been treated almost like a religion, and that’s just senseless.” Ladapo is responsible for Florida becoming the first (and so far only) state to recommend against vaccinating children against COVID.

Ladapo has touted the antimalarial drug hydroxychloroquine and the anti-parasitic drug ivermectin as treatments for COVID-19, despite the lack of any evidence that they serve that purpose. He’s responsible for Florida’s effort to strip transgender people of Medicaid coverage for their treatments and care.

Many of these pronouncements directly contradict the Special Olympics’ own efforts to counteract myths and misstatements about the vaccines. Among other points, the organization tells its community that the vaccines are safe, and its members should get vaccinated as soon as they’re eligible. By capitulating to DeSantis, they’re lending credibility to him and Ladapo.

What may be most disturbing about the Special Olympics’ decision is that the organization must know that dropping the vaccine mandate presents a special risk for its own athletes. A 2021 study by Philadelphia researchers documented what they termed “the devastating impact of Covid-19 on individuals with intellectual disabilities.”

The heightened danger arises in part from the higher rates of comorbidities such as obesity, diabetes and heart, lung and kidney conditions among those with intellectual disabilities. Those result, in turn, from the greater difficulty they have in caring for their own health and accessing healthcare when they need it.

Under the circumstances, then, the Special Olympics organization’s craven response to the DeSantis threat is nothing less than a betrayal of its own community. The organization had a sound medical rationale for imposing a vaccine mandate at the Orlando games. It chose not to protect its policies or its participants. What credibility will it have as a force for the health of its constituency now? The answer is: none.

The organization may not have had the option to postpone or move the Florida games, in practical terms. But nothing kept it from reiterating its advice that all those with intellectual disabilities be protected from COVID via vaccination, or letting it be known that the Orlando games will be the last that it sponsors in Florida as long as this preposterous law remains in effect.

Instead, it gave Ron DeSantis another opportunity to show the world that his brand of bullying works. That’s the most chilling consequence of all.

Early turnout in California's primary election is dismal so far

Why Nordstrom Steamed Ahead as Old Navy Sank

Old Navy Made Clothing Sizes for Everyone. It Backfired.