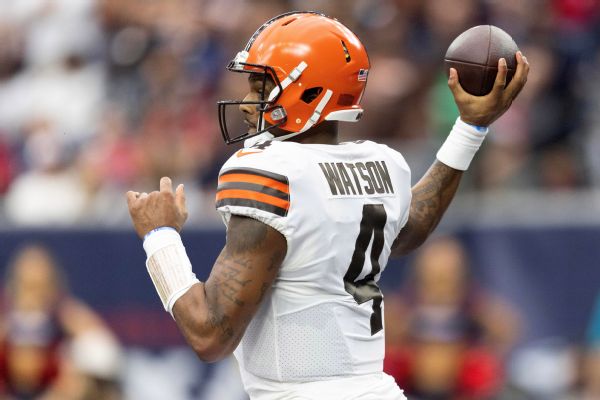 HOUSTON — Quarterback Deshaun Watson struggled against his former team in his first game.

After returning from an 11-game suspension for violating NFL guidelines on personal conduct through sexual assault, as defined by the league, Watson failed to lead the Cleveland Browns to a touchdown drive against the Houston Texans on Sunday.

Cleveland still defeated the worst team in the league 27-14 behind two defensive touchdowns and a Donovan Peoples-Jones punt return score — the first time the Browns scored three nonoffensive touchdowns in a game in 33 years.

Watson completed 12 of 22 passes for 131 yards in his first regular season game in exactly 700 days. He also threw an interception in the end zone that wiped out Cleveland’s best offensive scoring chance.

Despite NRG Stadium being half-empty, Watson was loudly booed throughout the game before each Browns snap.

“They should boo,” Watson said. “I’m a Cleveland Brown now and we’re on our way, so let them boo.”

Coach Kevin Stefanski said of Watson’s performance: “Obviously you’re missing a lot of time. So you have to come back in. You need to get that first one out of the way. But I know what the boy is capable of.”

The Browns traded for Watson in March, sending the Texans three first-round draft picks. Cleveland then signed Watson to a five-year contract worth a guaranteed $230 million, the richest contract in NFL history.

Watson demanded a trade from the Texans after the 2020 season. He was subsequently accused by more than two dozen women of sexual assault and other sexual misconduct during massage sessions before sitting out the entire 2021 season.

Some of those women had planned to attend Sunday’s game, said their attorney, Tony Buzbee, who said he would be at the game with them.

Watson has not been criminally charged. He has repeatedly denied any wrongdoing and said people were not interested in hearing his side of the story.

Watson was also fined $5 million and entered a treatment program as part of the suspension settlement between the NFL and the NFL Players Association.

On Thursday, Watson refused to answer any “non-football questions” as he spoke for the first time since August.

After Sunday’s game, Watson was asked if he had any remorse for what the league called “predatory” and “egregious” actions that led to his suspension. Once again, Watson refused to answer these questions.

“That’s something we’ve answered legally and clinically before. And they don’t want me to bring that up,” he said. “Of course it was a difficult situation. The suspension was tough. But at the same time, the main thing I’m trying to do today as a footballer is just 1-0.

“I was just excited to be back on the field today. I did everything I was asked and had to do. I have done all of this. And I was able to play today and be on the field.”

Watson paused during his warm-up before Sunday’s game to sign autographs for fans, some of whom were wearing his No. 4 Browns or Texans jersey. Watson also posed for selfies and photos with fans.

Sarah Flores, a Houston season ticket holder who had her red Texans No. 4 jersey signed by Watson, said she believes Watson is “100%” innocent of the allegations against him.

“Someone as successful as he is would never jeopardize his career like that,” she said.

Outside the stadium in the parking lot, a Texans tailgate set up a mock massage table with a mannequin wearing Watson’s Texans jersey with a sign that read, “Free massages without a license!!!”

Nearby, a fan wore an orange Browns shirt with “FREE WATSON” written on the front and “ALL HE WANTED WAS A HAPPY ENDING” written on the back. As the fan walked to NRG Stadium, he led a “Here we go Brownies” chant alongside two women in brown Watson jerseys.

Inside, a Texans fan held up a sign that read, “I’d rather be 1-9-1 than have Deshaun Watson as quarterback.”

Stewart Mathieson, a Houston fan from Scotland who bought side tickets for this game before the game, repurposed his blue Texans Watson jersey with the words “JUSTICE 4 WOMEN”. The words “BROWNS SHAME” were sewn under the #4 on the front of the jersey.

“Some of my Browns friends [in Scotland] I gave up supporting the team because of Watson,” said Mathieson, who flew in to the game with his nephew Christopher. “Am I going to boo him? Yes, I will boo him.”

https://www.espn.com/nfl/story/_/id/35182809/deshaun-watson-struggles-booed-return-browns Deshaun Watson struggles, is booed in return with Browns

Skelton: Trump's mail voting threat is out of touch with reality

Teresa Giudice Upset Over Her Brother's Comments On The Show