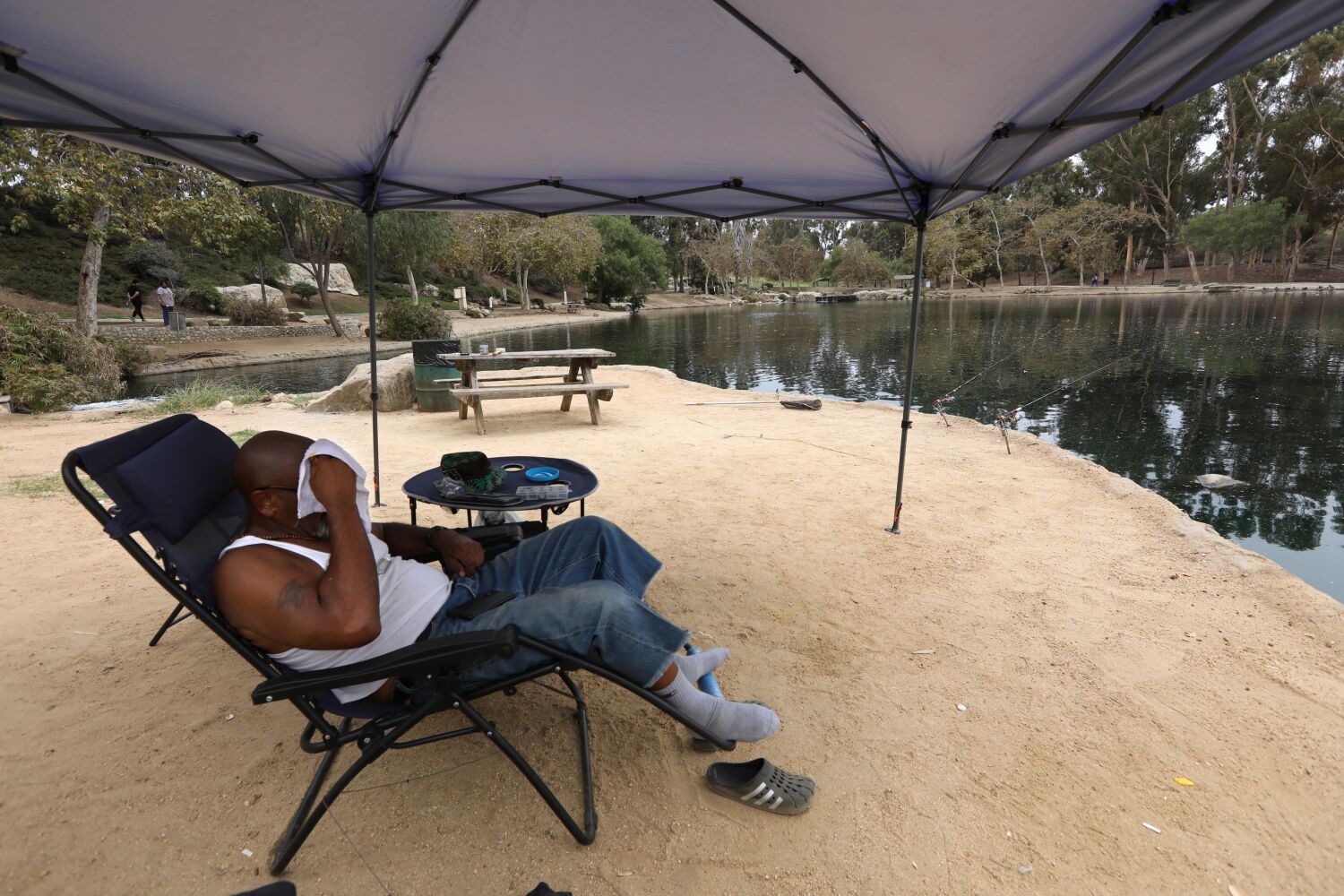 Anthony Willis has lived in a homeless camp on Vermont Avenue and West 3rd Street near Koreatown for years. During last week’s blistering heatwave that hit parts of Southern California with temperatures in the triple digits, Willis used a handheld fan, a large umbrella and soaked in ice to stay cool.

“It’s so hot,” said Willis, 35, on Friday. “I go to Starbucks every day and grab ice water so I don’t die out here. I’m surprised there’s a breeze coming through today – the wind is actually blowing.”

Willis had heard about the refrigeration centers Los Angeles had opened but had never been to one. He said he would consider going if free transport or buses were provided to drop him off at a refrigeration centre.

“We didn’t charge our phones all the time, or GPS, and most of it [the centers] are downtown,” he said. “We don’t really go to them because they are farther from our camp. We just make it hard where we stand.”

To meet the scorching heat, the city opened nine “enhanced” cooling centers — air-conditioned facilities that have extended hours during heat emergencies — on Aug. 31 to help people get out of the sun. The city went into lockdown after the National Weather Service warned the heatwave was likely to last into last week added two more centers and extended the end date for the extended hours, originally scheduled to fall on Labor Day, to 9 p.m. September 9.

But only about 2,256 Angelenos attended the nearly a dozen cooling centers at recreation and park centers between Aug. 31 and Sept. 9, according to figures from Joseph Riser, a spokesman for the city’s Emergency Management Department. With the nine centers open for 10 days and the additional two open in the final week of the heatwave, that collapses to about 21 visitors per center per day for a city of nearly 4 million people.

In addition to the recreation and park centers, more than 70 City Library branches serve as refrigeration centers during regular business hours. Daily attendance at other centers and libraries is not recorded because those seeking refuge from the heat “are likely to merge with other guests,” said Riser, who added that staff at many facilities have noticed an increase in attendance.

During last year’s heatwave, five expanded refrigeration centers opened in the city from June 15-20, Riser said. Only about 83 people attended.

A Times investigation published last year found that California grossly underestimated the number of people who have died from extreme heat and has largely failed to allocate resources to communities most vulnerable to the effects of heat and global warming are. As climate change worsens, heat waves are expected to become more frequent and intense.

Around 3:30 p.m. Friday, four people sat on folding chairs at the Lafayette Recreation Center near Koreatown — one of the expanded refrigeration centers the city opened in response to the heatwave. Seven people had visited the center that day as temperatures soared to 100 in downtown LA.

Brian Vega, 38, went to the center every weekday last week because his air conditioning broke during the heatwave, causing his apartment to heat up to over 90 degrees at night. Vega said he researched the cooling centers online and drove from Silver Lake every morning, staying from 11:30 a.m. to about 7:00 p.m

“There weren’t that many people there. I’m surprised,” he said. “[But] I’ve seen a lot of older people come and they’re the ones who really need to come and find out.”

Vega sat next to five or six people every day, he said, adding that he doesn’t think most people know about the centers or believe they actually work.

“They’d rather be sweating out there — they should come here,” he added.

Javier Moreno, a facility director for the city’s Department of Recreation and Parks, said the number of people at the Lafayette facility fluctuates from day to day but peaked last weekend when temperatures rose on Sept. 3 in downtown LA reached about 98 degrees.

“We’ve had our ups and downs, but for the most part we’ve got a steady flow of people coming in,” he said. “It is my pleasure to work especially for the community here and to open our doors to them in these hot times.”

Homelessness advocates and politicians said lack of need isn’t the reason cold centers aren’t being used enough. Rather, they say, there are not enough centers or pathways to get to them.

Andreina Kniss, an organizer with Ktown for All, a homelessness and advocacy group, said going to a cold center simply isn’t feasible for most people without shelter in the city.

“While an able-bodied person can do it in 20 minutes, for someone who is immobile it’s an all-day trek,” she said. “They’d rather stay in a tent and not move and hope to weather the heat than risk heat stroke if they move to one place.”

The rules in libraries also discourage people from showing up, Kniss said. Because many libraries don’t allow pets inside, she said, most homeless people would rather stay outside than abandon their pets. Other community centers allow animals if they are brought in with a crate – another obstacle for vulnerable populations who cannot afford them.

“There are more than 60,000 homeless people in Los Angeles County, and when you add in the number of people who are housed but don’t have air conditioning and need to take shelter from the heat, simply having a library as a cooling center isn’t enough respond to that need,” she added.

Kniss recommended the city address heat-related illness and death during a heatwave by preventing air-conditioning companies from kicking people out during a heat emergency, using existing infrastructure to allow people to travel to the cooling centers, and mandating that all residential buildings Air have air conditioners and the opportunity to ride the air conditioned bus for free.

Kniss said she has to call 911 every summer for people suffering from heat stroke. On average, five homeless people die a day in the county, and during a heat wave that number jumps to about nine a day, she said.

“I’ve never seen so many people suffer en masse,” she said. “The sustained heat for this long time has made it particularly awful. There are many people with comorbidities like HIV, cancer and diabetes that make them particularly vulnerable to the heat.”

Jonathan Parfrey, executive director of the non-profit organization Climate Resolve, called the cooling centers a “salve on people’s conscience” because they are underused. He said he almost never sees anyone in Los Angeles’ cooling centers during extreme heat events.

“This is a failed policy in my view,” Parfrey said. He said a much better policy would be to create community-based centers like churches or community clinics, which are well-known places that are already trusted, rather than a cold steel chair in a recovery center.

Councilor Bob Blumenfield, who represents the southwestern San Fernando Valley, helped reach out to homeless people to try to get them to go to a refrigeration center, but he met resistance.

“I’ve spoken to people glowing in the sun just trying to crawl into a bit of shade and it’s heartbreaking,” he said.

Last week, Blumenfield spoke to a homeless woman in her 20s who was hanging out with some of her friends in a shaded area. He gave her a flyer informing her of the refrigeration center at a facility in Canoga Park, but she chose not to go.

“They got high, so they wanted to deal with it,” he said. “She was red from the sun and it hurt me because I did my best to convince her to go to a cold center but also sign up for housing.”

“Part of the problem is that there are few cold centers. So if it’s not convenient for people to go there, they won’t go there,” he said. “People don’t necessarily want to go to an area with a lot of people they don’t know. They want to be in their private space or in a place where they can blend in.”

Blumenfield hopes more local cool centers will open and that libraries and recreation and park centers will have permanently extended hours to accommodate people trying to get out of the heat.

He also believes that refrigeration centers should be opened regionally. Representing the hottest part of the city, which could get up to 30 degrees warmer than other areas, he said his region may need the centers more often than others.

“The West Valley could have scorching temperatures and it might not affect the rest of the city so badly that the mayor could declare a heat emergency and open the refrigeration centers,” he added.

While libraries do not cost extra money to function as refrigeration centers, running a refrigeration center at a city recreation and park facility costs about $292.79 an hour, according to a July 2022 report by the city’s Emergency Management Department.

The county also operates about 159 refrigeration centers, but officials don’t keep totals for daily visitors to their facilities, according to a statement from the Los Angeles County Office of Emergency Management.

“Many locations functioning as a refrigeration center operate during normal business hours and provide their primary services to the public,” the statement said. “As such, it is difficult to distinguish who is in that facility/place to receive services (e.g., borrow a book from a public library, relax in a park or pool) or to recover from the heat to recover.”

LA County Office of Emergency Management Assistant Director Emily Montanez declined to comment on which refrigeration centers in the county have the most foot traffic.

“There are any number of scenarios that could be designed to paint a picture of spikes and try to explain them to each other,” she added.

Willis, who is currently trying to find accommodation, said the job is to make the refrigeration centers better known and more accessible.

“It’s just about knowing the addresses and getting the motivation to get there,” he said.