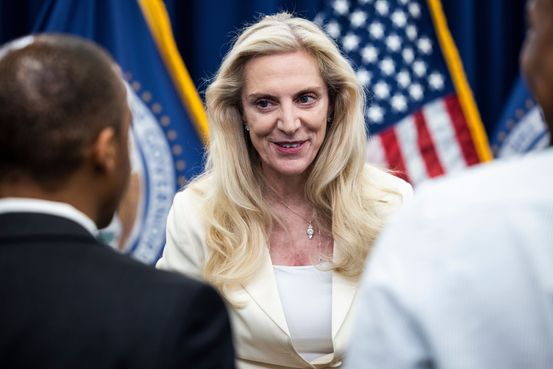 Ms. Brainard told the House Financial Services Committee that in the future, a central bank digital currency could co-exist and complement stablecoins by providing a widely available means of payment. widely supported by the government.

“It can provide a secure, central bank debt as a neutral settlement layer in the digital financial ecosystem,” she said. “It will really facilitate and enable the private sector to innovate.”

Her comments come as the Fed debates a potential new form of money to catch up with private-sector payment innovations, including stablecoins, a cryptocurrency intended to be pegged to the dollar. la or another national currency.

Unlike private cryptocurrencies like bitcoin, a central bank digital currency issued by the Fed will be issued and backed by the central bank of the United States, a government entity, as well as as US dollars and coins.

The idea has divided Fed officials, keeping them from deciding whether to create a digital dollar anytime soon.

Stablecoins have received renewed attention from regulators this month after TerraUSD, at the time one of the largest stablecoins, saw its value drop below a dollar.

“The recent turmoil in crypto-financial markets makes it clear that the actions we take – whether on a regulatory framework or a digital dollar – will be consistent with the future development of the financial system.

“We must be mindful that we may be in the midst of a new digital asset space race with countries around the world vying to deploy digital versions,” Ms. Waters said. of their own currency. “America cannot be left behind.”

Ms. Brainard echoed those remarks in her written testimony, saying that the digital dollar could be “a potential way to ensure that people around the world using the dollar can continues to rely on the strength and safety of US currency to transact and conduct business in the digital financial system. ”

Republicans in the House signal skepticism. Representative Patrick McHenry (R., NC) suggested the potential harms of the US digital dollar outweigh any benefits. “What specific problems, if any, would a central bank digital currency solve?” he asked Miss Brainard.

The benefits include consumer access to secure central-bank-issued currency during times of rapid decline, Ms. Brainard added. She said a digital dollar could also solve the fragmentation of the payment system if stablecoins one day become the dominant form of digital payment.

The central bank in January sought public comment on an internal report designed to spark debate over whether the US digital dollar could improve the payments system in the US. water how and how. The paper did not endorse any policy outcomes, and the Fed said the release of the report was not intended to signal any imminent decision.

The report comes as central banks around the world are faced with the proliferation of private cryptocurrency alternatives to traditional currencies, and are considering creating versions of their own. their own. Private offerings of digital currencies are extremely volatile and in many cases linked to criminal activities. To date, they have also not been widely accepted for everyday transactions, such as grocery purchases or movie tickets.

China has created a government-issued digital currency and banned transactions using cryptocurrencies issued by non-monetary regulators, for example bitcoin, ether, and tether. Meanwhile, El Salvador has become the first country in the world to adopt bitcoin as a national currency alongside the US dollar.

Banks and their trade groups say the idea has several limitations in the US, among them the potential to disrupt the financial system by luring deposits from traditional commercial banks, leading to to higher household and business lending costs.

Should the Fed Offer a Digital Dollar? Why or why not? Join the conversation below.

Proponents of the idea argue that the Fed’s digital dollar could make money faster and cheaper in the financial system, appeal to the underbanked, and provide an efficient way to regulate money. financial aid distribution.

However, Fed Chairman Jerome Powell said he sees reason to be cautious. He said that it is more important to get the digital dollar than it is to hit the market for the first time, in part because of the dollar’s important global role.

Other officials have expressed more skepticism about the need for a Fed digital currency. Former governor Randal Quarles, who left the Fed in December, said last summer that the US dollar was “highly digitized” and expressed doubt that a Fed digital currency would help revenue. sucking the unbanked into the financial system or reducing the cost of financial transactions, a goal that could be accomplished through other means, he said.