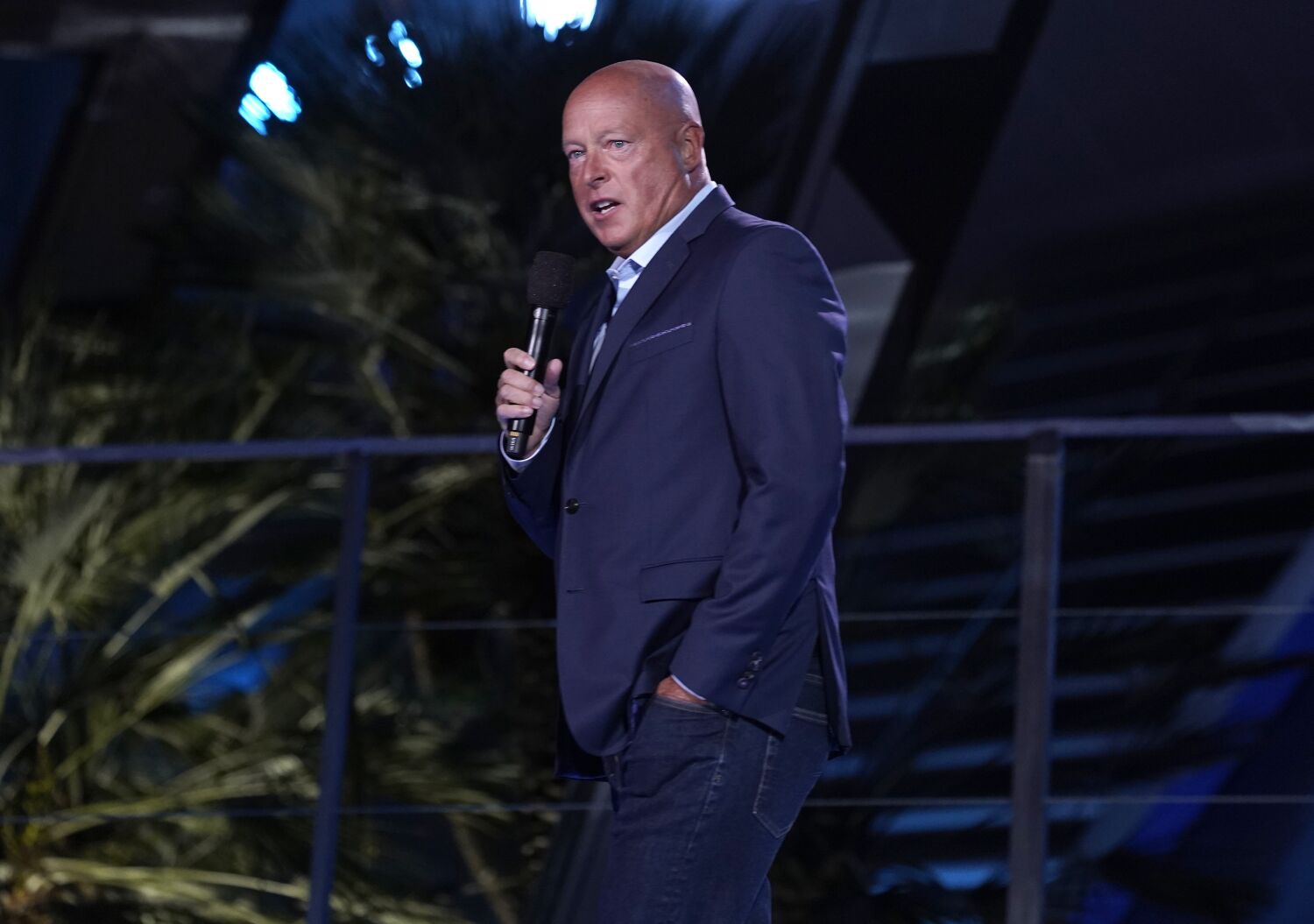 Walt Disney Co. Chief Executive Bob Chapek has headed the Burbank-based entertainment giant since February 2020, taking on the role just before the COVID-19 pandemic brought its operations to a halt.

Since then, the narratives surrounding Chapek’s tenure have largely been shaped by people other than Chapek.

The Indiana-born, three-decade Disney veteran was judged less by what he was than by what he wasn’t (e.g., he wasn’t his revered, charismatic predecessor, Bob Iger). He took on the heat for a high-profile box office bonus legal battle with “Black Widow” star Scarlett Johansson. And most blatantly, he became entangled between staffers who wanted him to speak out forcefully against Florida’s proposed parental rights in education bill (dubbed the “Don’t Say Gay” bill by attorneys) and conservative politicians and media figures who are delaying him attacked did this.

But now, with the support of Disney’s board of directors and a recent three-year contract extension, Chapek has an opportunity to move to a new phase of his reign and close the books on those rocky early days.

Chapek welcomed thousands of Disney fans at his first D23 Expo as CEO at the Anaheim Convention Center over the weekend, where the company unveiled a bevy of new movies and shows for Disney+, teasing James Cameron’s “Avatar” sequel and films from Marvel Studios, Lucasfilm , Disney Animation and Pixar. Much of the content is intended to boost Disney+, which has 152 million subscribers.

“I think what this represents now is a chance for me to speak for myself instead of other people speaking for me and trying to create an identity about who I am,” Chapek said in an interview on D23. “Thanks to COVID finally being in the rearview mirror, it’s a bit liberating to be able to speak for myself and show people where the company needs to go.”

Chapek spoke to The Times about the possibility of bringing Hulu into Disney+, the theatrical business and his ideas for how Disney can play in the metaverse.

This interview has been edited and shortened for clarity.

Now that you’ve received the three-year contract extension, do you feel like you were able to turn the page at the end of your previous tenure?

My timing was impeccable because I got the job and I think within a week we closed the company. This put us in an unfortunate situation, not only in terms of not being able to speak for myself in the world because we were all confined at home, but also because of the financial pressures that are being placed on our operations was exercised. They have essentially discontinued all of their earnings and the heavy burden of debt from the Fox acquisition. You’re just trying to do what you can for your employee base to try and keep them going. So no money comes in and a lot of money goes out.

I was trying to do this new job from a computer at my home in Westlake Village. And there was a zero crowd. I was in the Hollywood business on the studio side for 19 years. Then I’ve spent the last 10 years not doing that. So people are wondering, “Who is this guy?”

I think what this represents now is a chance for me to speak for myself instead of other people speaking for me and trying to create an identity about who I am. Thanks to COVID finally being in the rearview mirror, it’s a bit liberating to be able to speak for myself and show people where I want the company to go, and I think this D23 Expo is the perfect place to do that. And the 100th anniversary is a perfect catalyst for us to define our new strategic direction.

In the wake of the Florida political firestorm surrounding what critics dubbed the “Don’t Say Gay” law, have you been able to regain employee trust?

The advantage of having 200,000 employees is that we can listen to 200,000 different points of view. It gave me the opportunity to get very close to these people because we were listening. We took their viewpoints into account and incorporated them into the more modern interpretation of what the Walt Disney Co. can and will be in the future.

In hindsight, it was indeed a great opportunity to welcome them into the herd, absorb their input, and tailor our business to the needs of all of our constituents. The art of this job is to capture and connect the needs of all of our constituents. Our performers have always been an important part of that. And really, for the first time we got to hear their opinions on these things, which might have simmered quietly before people felt more comfortable voicing their points of view.

Disney has had a lot of success iterating on existing franchises. Do you think the company is doing enough to ensure it generates new franchises and intellectual property over the next 100 years?

Well, I think if you look at the animation panel we had two days ago, you’ll see that a lot of the ideas are original. For us it’s a mix. It’s about a portfolio.

In terms of things that have their roots in intellectual property, you can look at something like the Star Wars universe or the Marvel universe and I don’t think there’s any reason for anyone to assume they less than could be alive. If you’re Kevin Feige, the move to streaming has given you an opportunity to tell stories in a different way. I don’t think WandaVision would ever have happened without a streaming service. I don’t think The Mandalorian will be made without that.

We have 11,000 Marvel characters. We have 11,000 stories to tell. We haven’t even scratched the surface. I don’t see that as limiting at all.

You do so many things exclusively for Disney+. How does theatrical release for films fit into your strategy? Will the box office ever return to pre-pandemic levels?

The cinema business is and always has been an incredibly important part of our overall journey of reaching consumers and showing our films in their absolute best surroundings. We are as committed to theater as we have ever been. Part of the reason we’ve fully increased spending on new content is that we want to fully saturate theatrical performance as a distribution channel. But we do that with films that have the highest probability of success in this new world order.

We also want to make sure we have enough content to take full advantage of the possibilities of streaming, and that’s way more than we ever dreamed of. Now we’re finally reaching a stable condition for both of them and that’s a very good thing for us. I think theater will come back. I don’t think it will come back at the same level. I also don’t think it’s necessarily going to come back the way it’s always been. I think it’s going to be a blockbuster driven business.

That has already happened.

That has already happened. We have huge blockbusters that will live a full life in theatrical performances, but without the unnecessary need of us sitting on an asset for six months waiting for the next window to open. With our films, we were somewhere in the 30 to 45 day window from cinema to streaming.

What really struck me in last week’s panels is that prior to that, filmmakers were almost shy about talking about their film being streamed. There is no sign of that at all now. You are proud of it. It is a fully legitimate distribution channel. And guess what. You have now caught up with the consumer.

There’s a theory that Disney has coached consumers to stop going to the movies because they can simply wait 30 or 45 days to watch movies on Disney+.

It’s a rhetoric people like to use to advertise that somehow people don’t go to the movies because movies are available on Disney+. I do not believe that. When a movie tops $1 billion at the box office, consumers know it’s coming to Disney+, and that doesn’t stop them.

Interested in merging Hulu with Disney+ or more closely integrating Hulu’s non-Disney content with Disney+? For now, you’re limited because Comcast still has a stake in Hulu that you can buy out in 2024 or maybe sooner.

If you ask our Disney+ customers what they want, yes, they want more Marvel. Yes, they want more Star Wars. But the main thing they really want is more general entertainment. And once we [buy out Comcast’s stake], we’ll be able to ask questions like, do we handle it more like we do in Europe, where there’s a six-brand tile on Disney+; or we manage it as a ‘soft bundle’, which is what we have now; or move more towards a “hard bundle” in the future.

Just for the folks at home, a “fixed package” would give viewers access to all of these services through the same app, whereas now you get them separately, even if you pay with a credit card.

Right. I think at some point there will be some people who want a smooth experience. The consumer essentially dictates everything.

You previously shared your general ideas about a Disney “metaverse” as a way to have virtual worlds interact with how people experience Disney in real life through the parks. What is an example of how something like this might work?

Ninety percent of our consumers around the world will never get a chance to experience our Disney parks. The question is how can we build an experience that approaches that. It will be different, but maybe there are things you can’t do in real life that you can do with next-gen storytelling. You might really want to hop off the Haunted Mansion ride and check out this ballroom dancing scene. I can assure you that many fans want to do that. You can hop off any attraction at any point and explore Pirates of the Caribbean. Wouldn’t that be cool? Even if you have access to a park, we can realize that in a digital sense.

Seattle breaks record for most 90-degree days in a year