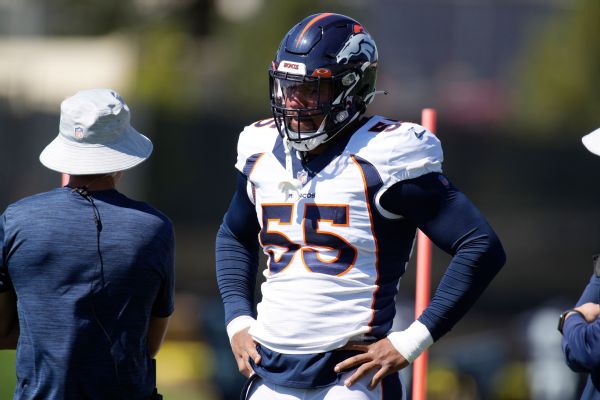 The Miami Dolphins and newly acquired outside linebacker Bradley Chubb have reached an agreement for a five-year, $110 million extension and incentives can increase it to $111.25 million, sources told ESPN’s Adam Schefter.

With the year he signed his contract, Chubb is now tied to the Dolphins for six years and $119 million.

The Broncos traded Chubb Tuesday for a package with the Dolphins that included the 2023 first-round pick Miami acquired from the San Francisco 49ers last year. The Dolphins also sent running back Chase Edmonds and a 2024 fourth-round pick to Denver for a 2025 fifth-round pick.

Chubb, 26, was in the final year of the rookie contract he signed in 2018, but Grier made it clear Wednesday that Miami would not part with a first-round pick on a one-year lease.

“When you do a deal like this for a player – from our point of view when we do business – you always like to have something done and we expect something to be done here shortly,” he said on Wednesday.

The former Pro Bowler has 5.5 sacks this season and ranks third in the NFL with a 25.8% pass rush win rate; his new team-mate Jaelan Phillips is fourth.

Chubb’s career has been marred by injuries over the past three seasons. He has missed 24 games out of a possible 49 in 2022, mainly due to a cruciate ligament tear and a bone spur in his ankle. Grier said the Dolphins conducted extensive research into his injury history and work ethic and determined there was no major cause for concern.

Over the next two seasons, the Dolphins must make decisions about several key players, including Christian Wilkins, Andrew Van Ginkel, Nik Needham, and Tua Tagovailoa, while spending $17 million or more on four players not including Chubb – Tyreek Hill, Terron Armstead, Byron Jones and Emmanuel Ogbah.

Information provided by ESPN’s Marcel Louis-Jacques was used in this report.