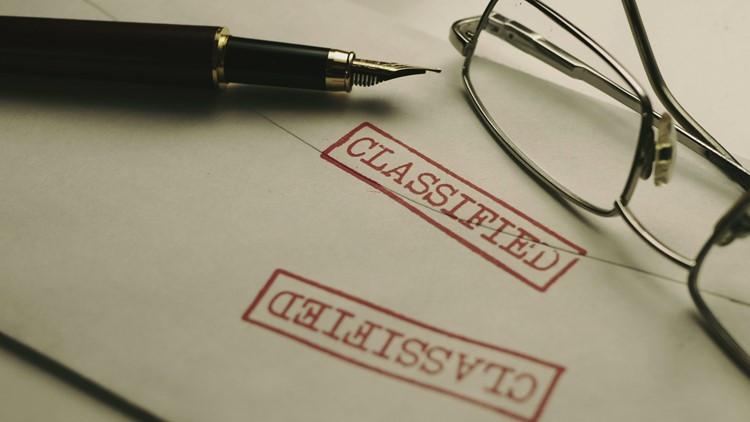 The 32-page affidavit for the FBI search of Mar-a-Lago revealed 184 unique documents that vary in their classification of confidential, top secret, and secret.

WASHINGTON — A 32-page redacted version of the affidavit explaining the justification for an FBI search of former President Donald Trump’s Florida home found that 14 of the 15 boxes found had classification markings.

The heavily redacted affidavit provided insight into the FBI’s decision to search Trump’s Palm Beach home. Of these documents found, 184 bore a number of classification marks.

According to the document, there were 67 documents marked as “confidential”, 92 as “secret” and 25 as “top secret”.

Agents who inspected the boxes found markings related to information provided by confidential human sources, as well as information related to the Foreign Intelligence Surveillance Act.

Secret documents, such as those found at Mar-a-Lago, are typically secured with fail-safes designed to prevent unauthorized persons from accessing them or authorized readers removing copies of the documents from where they are kept.

The classified documents found from Trump’s Florida home were mixed up with various newspapers, magazines, photos and personal correspondence, according to the affidavit.

The redacted affidavit can be read here.

What is the difference in the classifications?

Due to the threat of unauthorized disclosure of secret records, the information needs to be properly protected.

“Classified information, with any designation, may only be disclosed to persons who have been approved by an appropriate United States government official and who have a ‘need to know’,” the affidavit reads.

The Confidential classification is applied to information that could be expected to harm national security if disclosed to the public or to another state. This is the lowest level of the three classifications.

The “Secret” classification is applied to records that, if disclosed, could be expected to cause serious harm to national security. Most classified records are kept at this classification level.

For example, classified information could include documents that significantly disrupt foreign relations, affect a program or policy related to national security, or documents that could jeopardize a major military plan or intelligence operation.

The highest level of the three is Top Secret, which applies to information likely to cause exceptionally serious harm to national security if released.

If top secret documents are released, it could lead to armed hostilities against the US or its allies. Other top-secret documents could jeopardize important national defense plans or reveal sensitive intelligence operations.

‘There is collateral damage’: A father makes an emotional plea after son killed during pot shop robbery