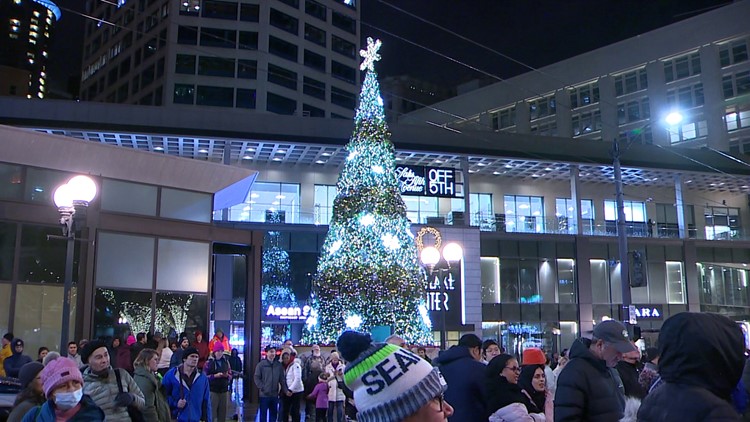 West Lake Park is decorated with 130,000 light bulbs during the holidays. Overlooking the park is ‘Macy’s Star.’

“Look around, everyone is happy,” Mikayla Borja said. Borja visits Seattle every year from Bend, Oregon. “My favorite part of downtown is the bustle of it. There’s always something going on.”

Figures from the Seattle Downtown Association show downtown visitor numbers are still below pre-pandemic levels, but they are improving. The association reported in October 2022 to have 2.41 million visitors, compared with 2.53 million in October 2019.

“When people come here, if they haven’t been here for a while, we think they see a clean, vibrant downtown,” said James Sido, Media Relations Manager for the Downtown Seattle Association. and friendly.

During the holidays, West Lake Park is decorated with 130,000 light bulbs. Overlooking the park is ‘Macy’s Star.’

The city center is welcoming new stores. Clothing retailer, Uniqlo opened inside the old Macy’s building just a week before the holiday season kicks off. Sido said there are plans to open four more stores in the building.

Sido acknowledges that while the downtown corridor is reopening, the holidays will be important for retailers.

Tunisians Emigrate in Record Numbers as Hopes Fade for Its Economy, Democracy