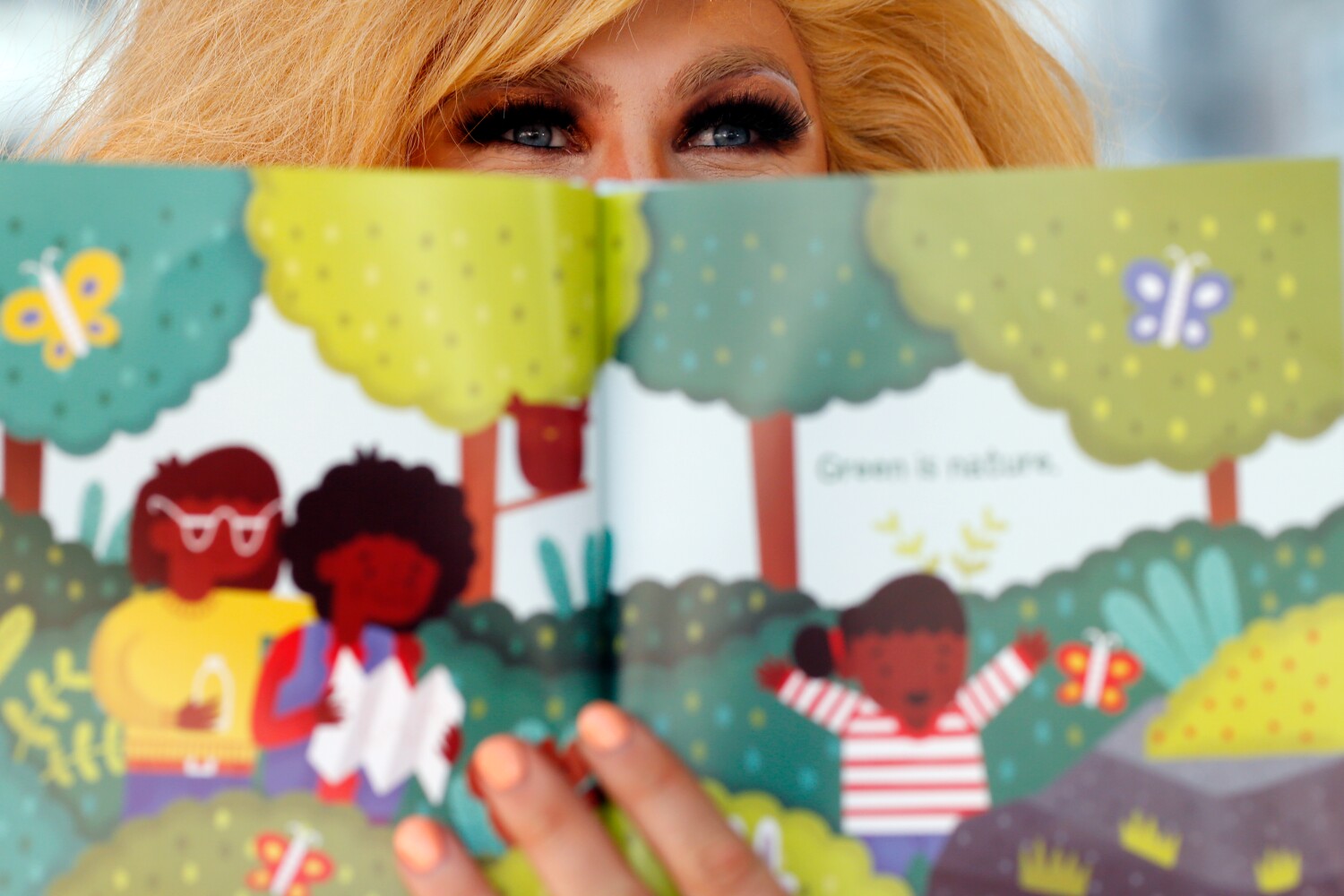 On Saturday afternoon, as Panda Dulce read to children and their parents at a Drag Queen Story Hour event south of Oakland, the library was stormed by a group of men — some of them wearing the colors of the Proud Boys, a violent, far-right group .

In a video shared by Dulce of the event at the San Lorenzo library, several men can be heard berating them and berating parents for bringing their children. Dulce, dressed in a San Francisco Giants jersey and hat, finally walks out when a man yells, “You’re not safe here.”

The Alameda County Sheriff’s Office is investigating the incident as a potential hate crime and child molestation and molestation, officials said. Five men described as members of the Proud Boys disrupted the event, shouting homophobic and transphobic slurs, the sheriff’s office said in a news release.

“Proud Boys marched in single file, cameras trained on me,” Dulce, 33, told The Times on Monday. “And one of them had a T-shirt in the colors of the black and yellow Proud Boys with an AK-47 on the front and the words ‘Kill your local pedophile’.

“They said, ‘So who brought the tranny?’ They started calling me a groomer and a pedophile and talking about how sexualized I was,” she said. “They scared the kids. The children buried their faces in their parents’ chests and could not comprehend what was happening.”

As Dulce exited the reading area and was escorted into a locked room by a guard she called her hero, her mind raced with fear and panic and thoughts of the recent mass shootings and hate incidents.

“We were completely defenseless and they could have been armed,” she said. “Even though this was clearly just a textbook intimidation tactic and they just wanted to make their presence known and scare us, to shrink us back into darkness, I felt in real danger.”

She spent half an hour in the back room before attempting to return to the reading area twice to finish the story.

“I was terrified to go back there, but I didn’t want them to be convinced that we successfully canceled our programming,” she said.

On the first try, Dulce said she was “extremely alert,” her eyes “flying around,” before returning to the back room.

After the deputies escorted the remaining disruptors out, Dulce returned once more to finish the story.

“I was looking over my shoulder the whole time because [an] An older couple was still pointing cameras at me and I was shaking,” she said. “It’s ironic because everyone says, ‘You’re so brave,’ but I was so scared. It’s hard to land those words.”

Afraid of leaving the library in her drag clothes and makeup, she called her partner, who brought her makeup wipes and a change of clothes.

The story hours, in which drag queens read to children in libraries, schools and bookstores, have grown in popularity in recent years. Dulce, a native of San Francisco, has been performing there since 2017.

MP Eric Swalwell (D-Dublin) said he would return to his district this week to meet with law enforcement and the community following the incident.

“We must reject this hatred and extremism wherever it shows itself,” he said. “There is no place for this hatred in the East Bay, and we must all speak with one voice to say so.”

SFGate reported that the Alameda County Library, which operates the San Lorenzo branch, will continue to host Pride Month events.

“Attempts to intimidate and silence others will not be tolerated in libraries,” an Alameda County Library spokesman wrote in a statement to SFGate. “We are grateful to Panda Dulce for showing bravery and resilience and completing the storytime event.”

Lt. Ray Kelly said the sheriff’s office is “bound to ensure that any member of our LGBTQ community who wishes to host an event or exercise their right to be a member of the community can do so safely.”

Although Dulce has received public support, she is still feeling the lingering effects of the incident.

“A part of me is still in this room,” she said. “There’s a part of me I’ll never get back. I guess not after getting into that fight-flight-freeze reaction [that] I ever left it.”

Dulce said it was no coincidence that her harassment occurred during Pride Month, within a day of the sixth anniversary of the Pulse nightclub shooting and the same day that 31 members of the white supremacist group Patriot Front were arrested on suspicion to have planned a riot Idaho Pride event.

Both Dulce’s library appearance and the Idaho event had been highlighted by a right-wing Twitter account called Libs of TikTok over the past few days.

On Sunday, State Senator Scott Wiener (D-San Francisco) had his home searched for explosives after a death threat was made to his staff. days before he had tweeted a joke on the inclusion of “Drag Queen 101” in the state’s K-12 curriculum.

“If we want to find a chance to fight [anti-transgender] Legislation, mitigating more harm and more events like this, more trauma to our community, then we must stand together,” Dulce said.

“I have a feeling there will be Proud Boys who will look at this coverage and be excited,” she said. “They think they are successfully bullying us. But the queer community, we are not victims. We are Heroes. You’ve never met drag queens before because drag queens have no obscurity and queers have no rest. We know that silence equals death.”

Russia Moves to Reinforce Its Stalled Assault on Ukraine