Along with the usual HGTV magic that Property Brothers has always provided, we got to see Lisa Kudrow perform one of her iconic songs as she played Phoebe Buffay on the legendary sitcom Friend. 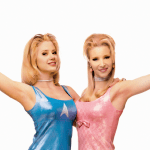 About the latest episode of the Scott Brothers show Celebrity IOUs, Kudrow asks the brothers to help renovate her cousin’s apartment – but the brothers also want something from Kudrow. Drew Scott surprised Kudrow by asking her to perform the song “Smelly Cat” from Friend.

When Drew gave her a guitar to play with him, she shockingly said, “I don’t know how to play it.” So instead, she dives into the iconic vocals we fell in love with over 20 years ago while Drew mixes and plays along.

A while later, Friend alum said, “I’m just ashamed, I did such a terrible job with ‘Smelly Cat.’ [I] should have just let Drew do it. (She shouldn’t be, it’s great for fans to see!)

The last time we got to see ‘Smelly Cat’ was when Kudrow and Lady Gaga played together, leaving fans in awe with a new performance.

Celebrity IOUs is a beloved HGTV show where the Property Brothers help celebrities surprise their loved ones with refurbishments. We’ve seen stars like Brad Pitt, Gwyneth Paltrow and Halle Berry at the heart of the episodes, helping to create spectacular renovations.