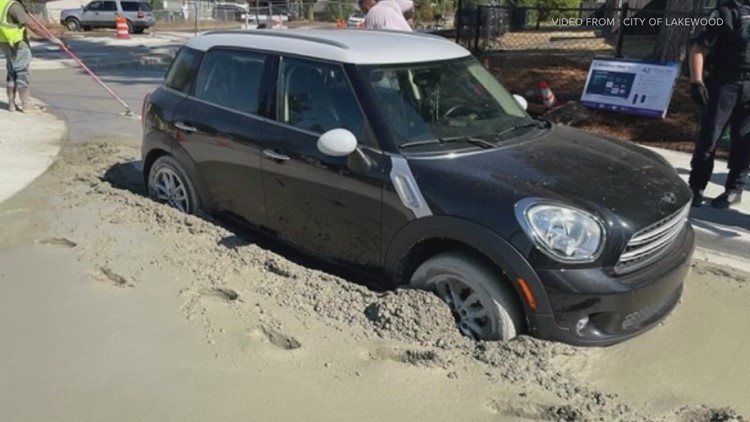 A woman drove through 100 feet of wet concrete, got stuck in fresh cement, and then walked away from the car with a half-full bottle of whiskey and a small boy.

LAKEWOOD, Wash. — On Monday, Lakewood City Inspector Chris Phippen said he watched a woman drive through nearly 100 feet of wet concrete, get stuck in freshly poured cement and then walk away from the car with a half-full bottle of whiskey and a small one Young.

“Yeah, it wasn’t good,” said Phippen, who worked with six construction workers on a new roundabout project in Lakewood.

Nobody was injured in the incident.

Swezey, who was arraigned Tuesday in Lakewood District Court, could face a felony charge, according to a spokesman for the Pierce County Attorney’s Office.

The car Swezey was driving had been reported stolen earlier in the day by her mother, Leona Kelley.

Kelley said she hopes her daughter will be charged with a more serious child endangerment charge.

The child who was in the car during the incident was Swezey’s four-year-old son, according to Swezey’s mother.

Kelley said the family tried for years to get Swezey’s help with drug addiction and mental health issues.

Kelley said she hopes a lengthy prison sentence will force Swezey to seek help so she doesn’t hurt herself or anyone else.

“Nobody wants their beautiful little girl to end up in a fucking prison! And no one wants to lose their mother,” Kelley said. “I should…or could be at Mt. Vernon Cemetery today.”

Ronaldo, Mane fall; Pepi and Toney rise ahead of Qatar 2022