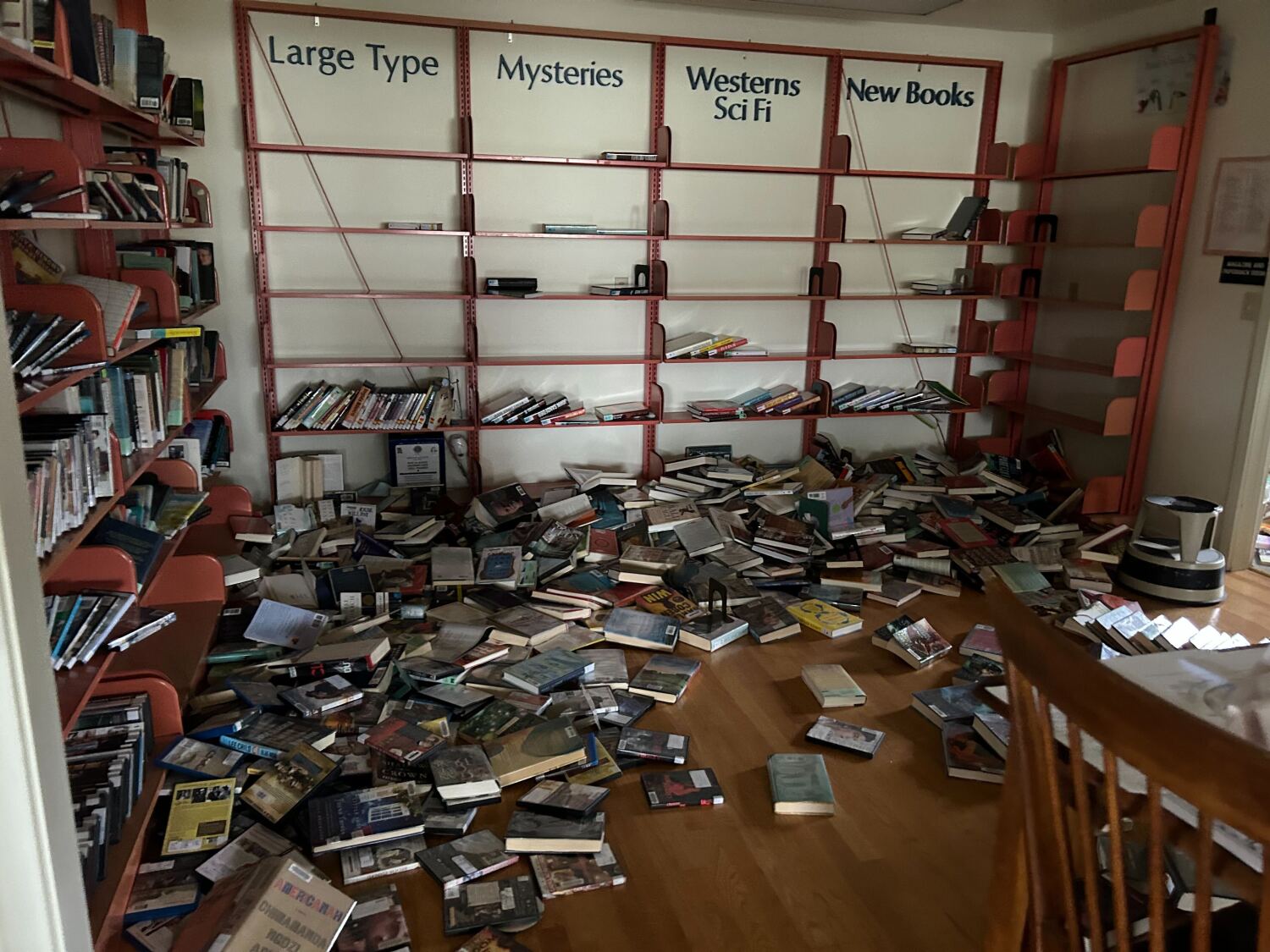 I woke up before 8am on Tuesday morning to a call from my editor – earlier than usual – with the kind of assignment you can’t plan.

There had been an earthquake. A large. Could I drive five hours north to Humboldt County from my home in Sacramento? Now?

I rushed to pack a bag, shoveling in phone and laptop chargers, a notebook, pens and business cards to prove I’m who I say I am. I opened my Maps app and typed in Fortuna—a historic logging town of 12,000—which I hadn’t visited in eight years of my life in California.

I didn’t have time to do much research, but I knew it was a 6.4 magnitude quake that resulted in two deaths, eleven injuries and the closure of a bridge over the Eel River. I knew that people had gone to bed the night before with a very different life when they woke up.

What I didn’t realize was that a new place would feel so familiar and that reporting would be easy because of that sense of community. This coastal region, about 55 miles from the Oregon border, surrounded by giant sequoia trees, reminded me of my hometown in West Virginia, in the heart of the Appalachian Mountains.

Both are regions characterized by a connection to nature, dwindling 20th-century industries, and resilient as hell.

Arriving in Fortuna just before 2 p.m. — after a long, winding drive that included a snowy detour through the Shasta-Trinity National Forest that only God and my GPS can explain — I pulled into the first restaurant I saw. The Double D Steak & Seafood was closed but packed with people cleaning up broken liquor and wine bottles – the smell hit your face.

Most of the helpers weren’t employees, but volunteers: the owner’s son had brought in his buddies to help sweep and take out the rubbish. The proprietor, who had been up since 3am wearing a camouflaged Santa hat, welcomed me and showed me around the dining room, which days earlier had been made up for holiday cheer and was now filled with broken ornaments, crooked photos and a fallen Christmas tree.

It was my first glimpse of a city that had been devastated by nature but was full of people helping each other through the crisis while reaching for a bit of normalcy.

At a vintage shop down the street, I felt my first aftershock, shaking an antique chandelier. I’ve never experienced a major earthquake and wondered what we should do. I was struck by the nonchalance of the owner.

“Oh, that’s a tremor. We should probably go outside,” said Heather Herrick, owner of Haute Hoarder boutique, who was taking a break from cleaning up broken glass.

However, by the end of my first day there, I understood that I was overwhelmed by an aftershock. I was exhausted at one of the few hotels in town that had power restored, but still no water. I was too tired to care about the slight swaying in the middle of the night. I let the shaking lull me to sleep.

I’m always amazed by people who are willing to let journalists into their lives on the worst of days. People were without sleep, electricity or water. They couldn’t stay warm or charge their phones. They didn’t know if the insurance would cover the damage. Drivers lined up to buy gas. All grocery stores were closed.

Yet no one turned me away or scolded me for intruding, even when I interviewed people who had been instantly made homeless. One person always led me to another.

“Is that Mackenzie from the LA Times?” a text read. It was Kevin Mcniece, a friend of Herrick’s, who had told him I was in town and wanted to show me his house, which had been split into three parts, set on fire and destroyed by local officials. He had lost most of his belongings and was staying in a hotel. For free.

“Ride the rock of generosity,” as he put it. He wanted to share his story.

A family who had been sleeping in their car introduced me to their pit bull, Sarah, when I met them at a pop-up sign. A woman who had taken refuge with the fire department cried when she told me that someone had offered to buy her family a hotel room for the night.

Volunteer firefighters and food bank workers gathered. It made me think of the quote attributed to Mister Rogers, which also serves as good advice for reporting. In times of disaster he said: “Look for helpers. You will always find people to help.”

Parts of Humboldt County that were hardest hit, including the cities of Scotia, Ferndale and Rio Dell, seemed very similar to where I grew up.

In West Virginia we don’t have earthquakes, but we do have floods. Instead of old timber company towns, we have remnants of a once booming coal mining industry.

Both places have immense natural beauty and are home to people who struggle with poverty but are proud of their heritage. They’re places rightfully suspicious of outsiders, but amazingly welcoming.

In this part of California, like West Virginia, communities are tight-knit in part because they believe no one else is coming to help them. I felt an understandable frustration at feeling overlooked and misunderstood.

But I knew I wasn’t one of them. I was only there two days. I could only listen. I’ve always asked about more than the earthquake: how is it usually like here? What are people doing wrong?

“The more populated areas speak for all of us,” Mcniece said. “The Bay Area and Los Angeles and Sacramento — they’re becoming the face of what California has in mind, but over here behind the redwood curtain, we have different needs.”

Whether they lost a few plates or entire houses, people generally stayed positive. This wasn’t their first earthquake and it probably won’t be their last.

“Living here isn’t easy at first,” said Rio Dell resident John Ireland. “When something bad happens, people come together. You see the best side of people.”

It wasn’t an easy place to submit a message. I had no power to charge my laptop. Cell phone service is patchy on a good day. As the sun went down, the already quiet town of Fortuna was silent, pitch black, and difficult to navigate.

Not having a reliable internet connection, I had to submit a story the old-fashioned way of calling a co-author from my car, who transcribed and pocketed my notes. I submitted another story from McDonald’s in Eureka. (Great WiFi.) Driving home Wednesday night, I stopped in dark and foggy Lake County and asked the initially reluctant owners of a hotel to let me use their internet, even though I’m not a guest. (Call to the Lodge at Blue Lakes.)

When I returned to Sacramento, where I usually oversee state government and politics, I was grateful to see a part of California that reminded me of my hometown nearly 2,500 miles away.

I thought of the Scotia Lodge, a 100-year-old hotel that was largely undamaged by the earthquake, although destruction was visible all around. The lodge owners rushed to take in the displaced. By the end of the week they were up and running again and the rooms were filled with paying tourists and community members who were staying for free and had nowhere else to go.

Aaron Sweat, the lodge’s manager, told me about a visiting family from Europe who were so distressed by the earthquake that they hastily fled Scotia. When a gas station wouldn’t accept her international credit card, a local stepped in to pay and refused to accept cash.

“I think in times of tragedy, Humboldt and all these little rural towns everywhere, you just get together and say, ‘Let’s find out,'” Sweat said.

On Facebook, the lodge told concerned locals that the site is still standing.

“This isn’t the first nor the last time Mother Nature has put this old girl to the test,” the post reads.

The historic building, sturdy and welcoming, was a surprising sight. But it gave me a feeling that was painfully familiar.

https://www.latimes.com/california/story/2022-12-24/reporters-notebook-my-trip-to-the-humboldt-county-earthquake-epicenter Earthquake made a hard life in Humboldt County harder

I'm a first aid expert - from burns to choking, here's 6 life-saving tips you need to know this Christmas

35 of the Best Shows on Disney+ Right Now

Coronavirus cases soar in L.A. County, but this is different

5 things to know this Monday