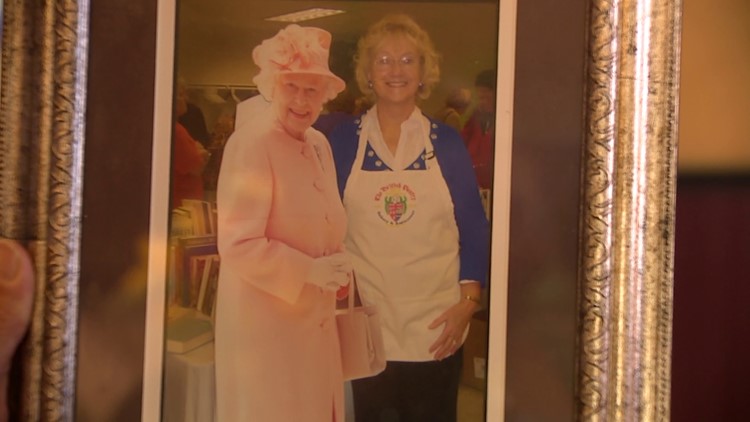 The walls of The British Pantry are covered in photos of the royal family, and traditions like high tea with finger sandwiches are popular with Brits and locals alike.

REDMOND, Wash. — Since 1978, The British Pantry Ltd. a slice of British nostalgia and authentic food and goods imported from England.

British Pantry has expanded five times over the years but is still in the same location in the city of Redmond. The family-owned and operated company was busier than usual on Thursday with the news of Queen Elizabeth II’s death.

“A lot of expats come here for items they can’t get anywhere else, and today it seems like many just want a place where they can be surrounded by other people honoring the Queen,” said founder Mavis Redman.

She and her husband Fred moved to America from England, bringing with them the baking skills Mavis learned at their family’s bakery in Swinton, near Manchester, England.

Her children Alvia and Neville have worked at the British Pantry since it opened and said they have many expats who often buy comfort items left behind when they emigrated to America. Alvia said they have unusually little merchandise featuring the Queen, having almost sold out during the platinum anniversary celebrations in February.

The Queen visited Seattle in 1983 and Mavis said she even baked a cake for her.

The walls of The British Pantry are covered in photos of the royal family, and traditions like high tea with finger sandwiches are popular with Britons and locals alike.

Ian King said he moved to Redmond from England in 1983 and says British Pantry has been a “lifesaver” for all the items he grew up with that he couldn’t find anywhere else. He knows that today’s afternoon tea will be with a heavy heart.

“It’s the end of an era. I’m still processing it to be honest,” King said. “Today is a sad day, the coronation of Charles will be happy.”

Mixed feelings are scattered across the property, which now houses the restaurant, bakery, gift shop and Three Lions Pub.

Mavis said she woke up to messages from friends who reached out to her for comfort.

“I got text messages from people saying they’re so sorry you lost your queen. That’s how I still think of her. As my queen because that’s what she was, but also an amazing woman for us to celebrate,” Mavis said.

The British Pantry Ltd is open for lunch and dinner with breakfast at weekends.