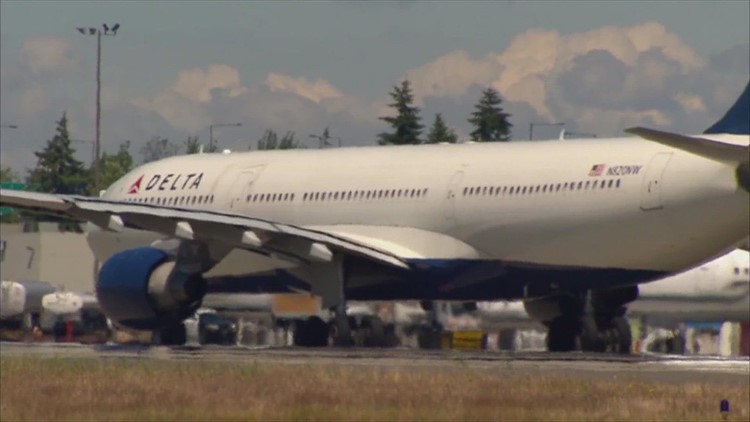 Sea-Tac is on track to exceed capacity by 2050, prompting state legislatures to seek a new site for a commercial airport.

ENUMCLAW, Wash. — As Sea-Tac International Airport recently experienced long lines of travelers waiting to get through security, state lawmakers fear the facility is reaching its limits.

Sea-Tac is on track to exceed capacity by 2050, prompting state legislatures to seek a new location for commercial airports.

Legislature passed a bill creating the Commercial Aviation Coordinating Commission, which will find the best location with help from the Washington State Department of Transportation (WSDOT).

However, at one King County site under consideration, locals are fighting back.

About 30 miles from Sea-Tac is Enumclaw, an agricultural area being considered for a new commercial airport.

“They’re building an airport out here, slowly and surely it’s all getting paved,” said Dave Brockman, a retired airline pilot who lives in Enumclaw.

“It’s not that we’re worried about the quality of life. We won’t be able to live here anymore,” said Tim O’Brien, President of the Enumclaw Plateau Community Association

One reason the sites are being considered, according to the study, is because they are all west of the Cascade Mountains, making access easier in inclement weather.

“It’s going to be a difficult place to travel to and there’s no way to build enough bridges, high bridges, to get across these gorges,” O’Brien said.

It may also affect the current airspace in the region, which is home to smaller airports and personal aviation.

“There’s a lot of aviation out here that isn’t mentioned in any of these studies. All they’re really seeing is how we can get more out of these jet transporters,” Brockman said.

The bill that formed the committee to find a new airport site bans a site in a county with a population of more than 2 million, technically putting King County out of the running. WSDOT is still investigating the area as a recommendation that worries the community, particularly in relation to the environment.

“This is the Big Spring Creek Reserve that they created and spent $3 million restoring salmon habitat to,” said Kym Anton, chair of the Save the Plateau Committee.

Anton said WSDOT’s study was flawed by not accounting for salmon and the area’s flooding.

“Most of these acres are flooded to the doorstop,” Anton said.

The study also looked at the impact on BIPOC communities. The Muckleshoot Tribal Council sent a letter to the chairman of the Commercial Aviation Coordinating Commission opposing the airport. The letter states that this will have an impact on tribal businesses and the environment, and requests that the site be excluded from further consideration.

“We can all agree that this is a bad idea, not just for the local community but for the entire Puget Sound area,” O’Brien said.

The top two picks are recommended to lawmakers by October and the final election by June 2023.

'Days of Our Lives' move to Peacock irks fans: 'It's unfair'