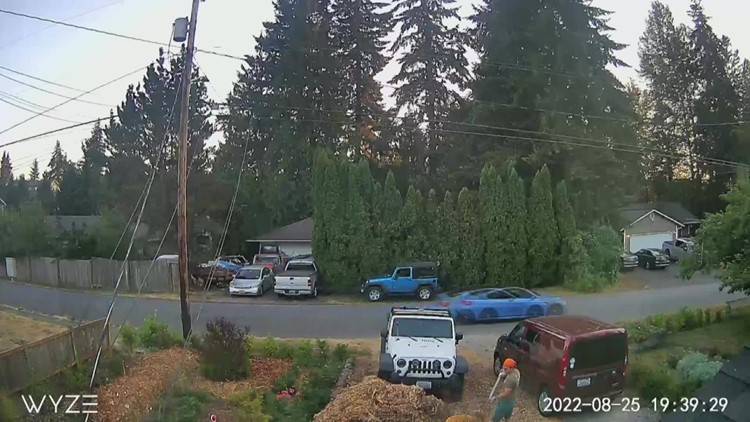 The problem is so bad that Luis Burbano started a YouTube channel where all problems are posted.

EVERETT, Wash. — An Everett homeowner says loud cars speeding through his neighborhood ruin the quality of life for himself and his neighbors.

Now he’s asking the city to do something about it.

Luis Burbano builds a food forest in his backyard to feed his family.

He believes in sustainable living and spends much of his time farming the land outside of his south Everett home, but he says the traffic he endures is not sustainable.

“You can’t have dinner without hearing the VROOOOM,” he said. “Sometimes the cars wake up my family and my daughter. In the middle of the night I’m awake, my wife is awake, my child is awake and my dog ​​is barking. It’s a problem for us. It really affects our quality of life.”

Four years ago, Burbano set up a camera in his home and pointed it at the street outside, Dakota Way.

According to Burbano, traffic on the Dakota Way sounds more like a freeway every few hours.

Burbano has sent dozens of emails to the city asking for speed bumps or road modifications.

The city has put up a few radar speed signs, the police have posted a few tickets and public works have removed the center line from the road designed for slow speeds, but the problem persists.

“It’s really discouraging. I feel like the city let everyone down. I feel abandoned,” said Burbano.

The city’s traffic engineer, Corey Hert, says modifying the street would be prohibitively expensive, costing at least $15,000 to $20,000.

He says speed bumps are noisy, slow emergency vehicles and people tend to speed after going through them.

“Here in Everett, we haven’t installed a speed bump in 30 years,” Hert said. “Some cities use them. In Everett, we decided against it.”

The Everett Police Department is understaffed and non-urgent issues like noisy trucks are not a high priority at this time.

Enforcement in such cases can prove difficult as they need to be caught red-handed by the police in order to issue a ticket to an excessive or loud driver.

When asked if Dakota Way residents would have to live with it, Hert replied, “We’re doing what we can to keep the speed down and take the necessary action.”

Burbano, a Boeing engineer, began looking at the bigger picture and calculated WSDOT numbers for Seattle, Everett, and the similarly sized city of Renton.

Hert said the city has recently made improvements to slow drivers and make roads safer.

He pointed to a section of the Evergreen Way at 112th Street where the speed limit had just been lowered from 50 to 40 miles per hour.

“Our top priority is the safety of cyclists and pedestrians,” Hert said. “Unfortunately, this isn’t just an Everett problem. It is everywhere.”

When Burbano finishes working in his garden, he takes his 2-year-old daughter by the hand and leads her back inside, hoping for a peaceful night.

“I’ll just go to bed and cross my fingers,” he said.

All the gear you need to game-stream like a pro