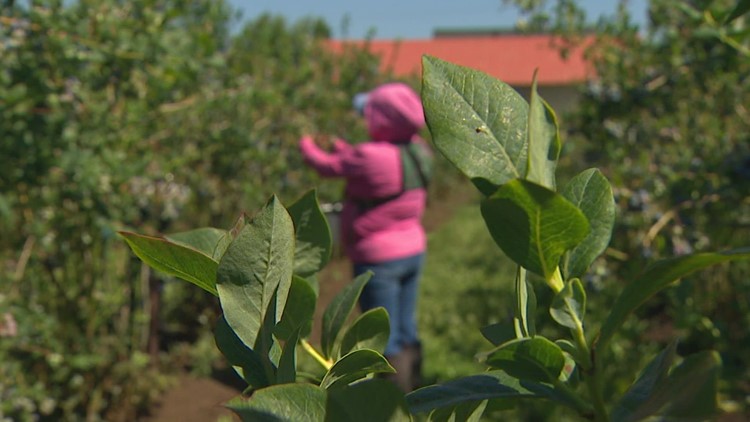 People who work outdoors are at increased risk of heat-related illnesses in extreme temperatures.

BOW, Wash. – Amid above-average temperatures, people who work outdoors are at higher risk of heat-related illnesses.

The Washington State Department of Labor and Industries (L&I) has issued emergency rules to protect outdoor workers, such as people who work on farms, in hot weather.

The annual berry harvest is underway in Skagit County. The wet Northwest spring pushed it back a few weeks and into the heat of late July and August.

This increases the risks for farm workers.

Marcela Hilario no longer works the fields of Skagit County. She moved into a farm stand at Bow Hill Blueberries and gave up the relentless work a few years ago after suffering heat stroke on another farm.

“I was picking and the next thing I know I’m going to pass out,” she said. “I just fell down. The next thing I remember, my parents picked me up. My boss told me to just go home.”

Some farm workers are reluctant to leave because it can cost them a day’s wages.

While Hilario no longer works in the fields, her mother, father, sister and brother still do. She worries for them if temperatures reach the levels they are this week.

“It’s not a job that anyone loves, but it’s something you have to work at because it’s the only job you can get,” Hilario said.

During last year’s heatwave, 180 people died in the Northwest from heat-related illnesses, including farm workers.

Last summer, L&I enacted emergency protection measures for farm workers in hopes they wouldn’t have to choose between risking heat stroke or caring for their families.

Protection activated when temperatures hit 100 degrees. This year, that threshold has dropped to 89 degrees.

Nearby shades for workers are now mandatory, along with paid 10-minute cooldowns.

Chefs need to monitor air temperature and check for signs of heat stroke.

A spokesman for L&I says the department has inspectors in the fields every day, including weekends.

Officials are currently working to make the emergency rules permanent.

At Bow Hill Blueberries, tents and water fountains are set up just outside the fields.

“What’s the saying? An ounce of prevention? Making sure everyone is safe throughout the day should be on everyone’s priority list. We don’t want people to get sick,” Matheson said.

Nobody repeats that more than Hilario.

She thinks the new rules are working, but she still makes sure to keep an eye on her family and brings them bottles of frozen water to cool off in the fields.

“I’m glad what my employers are doing to help us. They always wonder if we’re okay, if it’s too hot,” she said. “In the end, it’s about how everyone helps each other.”

Britney Spears SLAMS Catholic Church For Denying Her Wedding To Sam Asghari: ‘Isn’t Church Supposed To Be Open To All?’