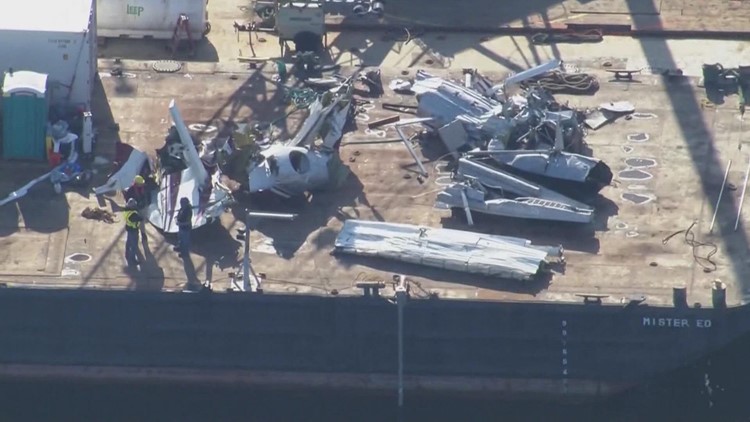 The NTSB recovered 6 bodies and 80% of the plane that crashed off Whidbey Island on September 4th.

OAK HARBOR, Wash. – The families of the victims of a fatal seaplane crash off Whidbey Island plan to conduct their own investigation into what went wrong.

Ten people were killed, including nine adults and a child, when a seaplane nosedived and crashed into the water near Mutiny Bay. The aircraft departed from Friday Harbor as a scheduled commuter flight to Renton Municipal Airport. The crash was reported around 3:10 p.m

Island County Emergency Management said six bodies were recovered from the rubble, five of which have been positively identified. One of the recovered bodies has not yet been identified.

The body of a passenger, later identified as Gabbie Hanna, was previously recovered by a Good Samaritan at the crash site.

The NTSB was able to recover 80 percent of the plane and efforts are likely to continue over the next few days. A lawyer representing the victims’ families said it was a crucial step in closing them down.

“I think everyone remains absolutely devastated,” said Alisa Brodkowitz, an attorney at Schroeter Goldmark & ​​Bender, who represents the victims’ families.

“That was a crash that hit us really close,” Brodkowitz said.

On Tuesday, the emergency services began to salvage the wreck. The NTSB said it specifically recovered the engine, a wing, the propeller and the gearbox. The aircraft did not have a flight data recorder. Brodkowitz said there is no rule requiring this for this type of aircraft.

“We are all so grateful that the recovery has gone so well. Right now we’re paying attention to the parts that the NTSB didn’t recover,” Brodkowitz said.

The team still has to salvage a wing, a piece of tailplane and both elevators.

“These may be parts that left the plane before the crash and played a causal role in the crash,” Brodkowitz said.

The NTSB said finding these components was critical to its investigation.

“I would like to ask the NTSB to work expeditiously to return the debris to the families for the next steps in their own investigations as the NTSB’s conclusions are not admissible in court as those conclusions and system do not apply to the manufacturers and Shippers are supporting the families in the investigation,” Brodkowitz said.

Brodkowitz also questioned the integrity of the de Havilland DHC-3 Otter, the type of aircraft involved in the crash.

The crashed plane was built in 1967. King 5 found records showing the plane received an airworthiness certificate in May 2014, which likely means the plane’s owner, Northwest Seaplanes, installed a new turboprop engine.

“You never want to see the same plane crash twice. This is not the first Otter crash where the engine was a piston engine and then became a turbine engine in a rebuild process and a newer engine was fitted later in its life,” Brodkowitz said.

Seaplane companies are heavily regulated by the FAA.

King 5 has reached out to Northwest Seaplanes for comment but has not yet received a response.

Brodkowitz asked anyone who had flown or seen anything on the plane in the weeks leading up to the crash to come forward with any information that might help the families.

Officials said determining the probable cause of the accident could take 12 to 24 months.

https://www.king5.com/article/news/local/whidbey-island-plane-crash-family-attorney/281-2f8cd548-7a9e-412e-b8ae-51cc2b22e0db Families of victims in deadly floatplane crash plan to conduct their own investigation

Will $1.35-billion Mega Millions jackpot be won on Friday the 13th?