Facebook Twitter LinkedIn Tumblr Pinterest Reddit
NEW YORK CITY (WPVI) – The families of two young black girls at the center of viral video captured at Sesame Place in Bucks County, Pennsylvania last weekend have hired an attorney and are demanding further action from the theme park after they found the Children have said they were snubbed by a character.

Jodi Brown, who posted the video online, and her 6-year-old niece were accompanied by attorney B’Ivory LaMarr to a news conference outside the Sesame Workshop in New York City on Wednesday.

LaMarr said they don’t want to sue the company and it’s not about money; he said it’s about getting things right – and that hasn’t happened yet.

The nine-second video, posted to Instagram on Saturday by Brown, the other young girl’s mother, showed the character Rosita high-fiving a white child and woman, then gesturing “no” and walking away from the two girls who had their arms outstretched for a hug and high-five during the parade at Sesame Place in Langhorne, outside of Philadelphia.

LaMarr said he has additional documentation about the incident and may release it depending on Sesame Place’s further actions.

“We have information that we possess – we will give this company, they have less than 12 hours to release information with a very sincere and authentic apology – or we will provide evidence showing exactly what happened to complement that.” video you’ve already seen,” LaMarr said.

LaMarr said the evidence relates to family comments that the Rosita character hugged a white child after walking past the two girls.

In an initial statement Sunday, Sesame Place said the park and its employees stand for “inclusiveness and equality in all forms.” The statement also noted that performers sometimes miss requests for hugs because the costumes they wear make them difficult to see at lower levels.

“The Rosita actor did not intentionally ignore the girls and is devastated by the misunderstanding,” the statement said.

However, many people have expressed outrage online and some have called for a boycott of the amusement park.

Cydney Moore, who lives in North Carolina, saw the video after it went viral. She says the same Sesame Square character ignored her two-year-old son on July 8th.

“He was abandoned. He was disappointed. He didn’t get it,” Moore said.

The park issued a second statement Monday, apologizing again and promising it was “taking action to make it better.” These efforts also include inclusion training for employees.

The family said they showed the video to Sesame Place right after the incident and said the character didn’t act that way towards white children who were there.

“This mother tried to solve this problem immediately. It wasn’t about advertising. It wasn’t about money. She immediately went to the administration of the park. She showed them the same video that millions of people in this country and the world have seen. Sesame Place had the opportunity to see this video back then. They decided to turn it down. They decided to release this family,” LaMarr said.

Brown said staff told her there was no supervisor available at the park at the time.

The company also invited the family to return to the park, promising a better experience, but their attorney said they were unwilling to accept that.

“I just feel like the apologies weren’t genuine, and I believe the apologies are being released now because they caused so much uproar,” Brown said. “I want them to be able to do what’s right as I, my niece and my daughter have all suffered from embarrassment (and) discriminatory behavior.”

LaMarr said they want the person in the Rosita costume fired. He also wants the park to cover any mental health care costs for the children incurred as a result of the incident.

The family and lawyer said Brown’s daughter, who was not at the press conference, was at home in isolation.

“We reject any notion that the performer’s actions last Saturday were anything but intended,” said LaMarr. “I know our black girls are magical, but I didn’t know they were invisible. We’re sick of your excuses. We’re fed up with justifications. We will not tolerate racism in this country.”

LaMarr said a big problem is that this wasn’t an isolated incident, and he’s been contacted by at least two dozen other families who claim they’ve experienced racism at Sesame Square.

He said these allegations are being investigated. 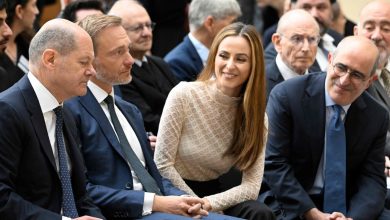 Trump, at a weak point, pitches a comeback

The High Cost of Free Money