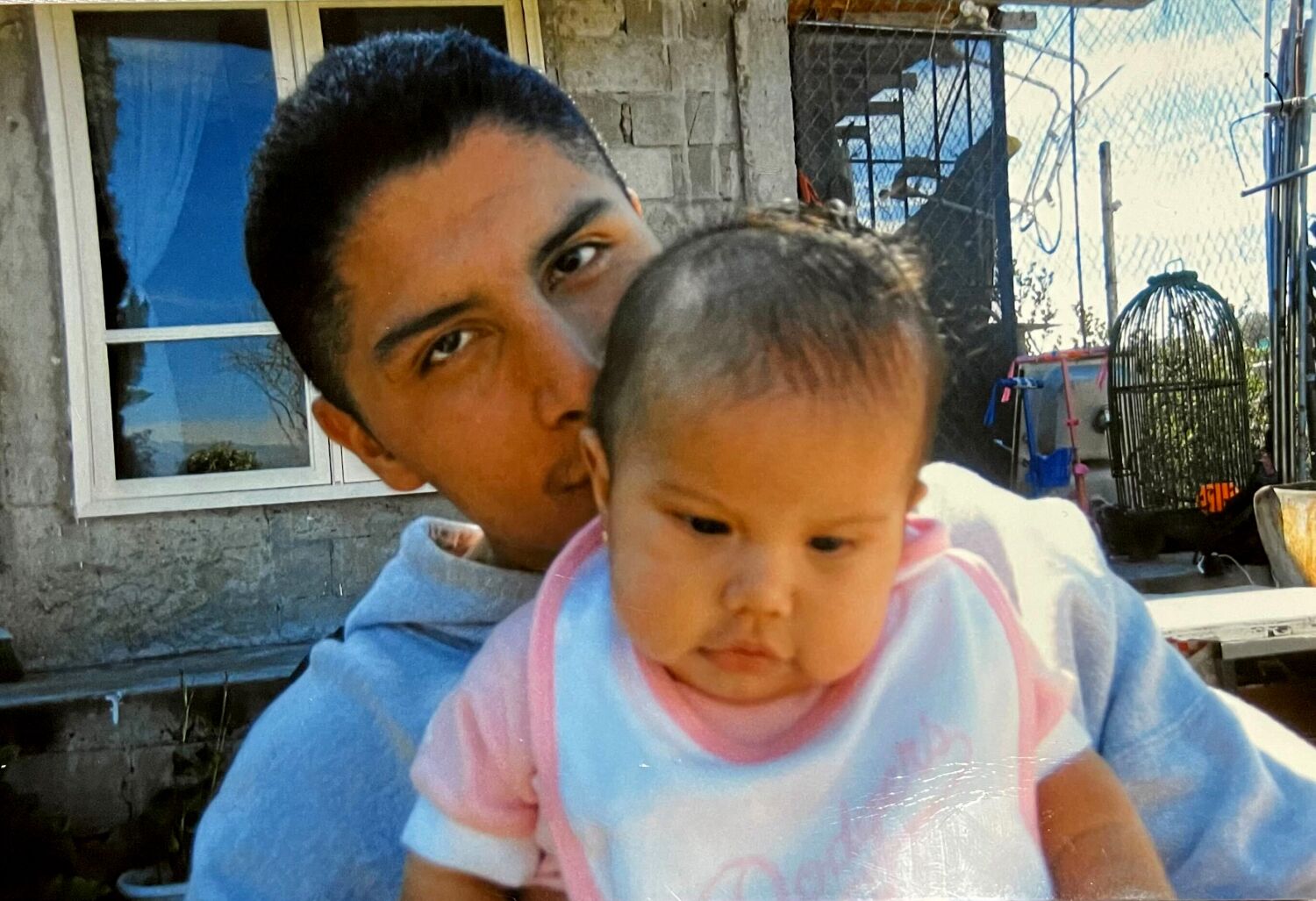 As dusk fell over the Westlake District in central Los Angeles, several dozen mourners gathered for a candlelight vigil near where a 35-year-old man was shot dead by police during a foot chase that began , when officers reportedly saw him with a gun .

Giovanni Luna was walking near the intersection of Sixth Street and Rampart Boulevard around 3:20 a.m. Saturday when the pursuit began, police said. The chase ended in a hail of police bullets half a block away.

On Wednesday, about 20 of Luna’s family and friends returned to the site and huddled over a makeshift memorial made of votive candles arranged in a heart shape. A large photo of Luna hung above the candles. His Brother solemnly walked through the crowd of mourners with tears streaming down his face and distributed flowers.

He presented one to Patricia Guevara, Luna’s former friend, who attended the vigil with her 14-year-old daughter, Starla Luna. Guevara said losing Luna was difficult enough, but in recent days she has struggled to get answers from police about the circumstances of his death.

“I want the LAPD to take responsibility for his assassination,” she said.

But she has tried to put on a brave face in front of her daughter, who has collapsed at home more than once and remembers her father.

Luna, Guevara said, worked odd jobs to make ends meet, most recently as private security for a TikTok influencer whose name she couldn’t immediately remember. He’s also a doting father, she added: “His daughter was his everything.”

Frustration crept into her voice as she began talking about the incident and the officers’ delay in providing assistance after Luna was shot. Grainy cellphone video of the episode showed Luna’s body lying on the sidewalk while officers watched from several feet away.

Los Angeles Police Department guidelines require officers to assist people they have just shot, but in practice they routinely wait a few minutes before approaching and then focus on handcuffing and searching them.

Another video captured by a neighbor shows two officers running down the middle of the street, guns drawn, yelling at Luna to “drop it” before opening fire. The short shot doesn’t show Luna being obscured by a tree. After firing several shots, the officers are seen moving toward Luna.

Guevara questioned the need to use deadly force in the first place, saying that despite their de-escalation training, officers appear to be quick to use their weapons – and later claim they feared for their lives. Guevara said that in her job as a nurse at a local hospital, she was regularly confronted with unruly patients, some of whom were armed. But, she said, she is expected to try to resolve the situation peacefully.

“I’ll tell you what: if [someone] tried to pull a knife on me and i hit her, guess who loses their driver’s license? Me. Because I’m a trained professional,” she said.

Other friends said Luna has struggled with his mental health in the past, leaving him prone to outbursts of anger at times and leading to several previous clashes with law enforcement. In June, he reportedly led California Highway Patrol officers on a chase that ended when the black 2007 Mercedes he was driving crashed on Highway 134 and burst into flames.

Luna suffered a fractured skull and other injuries that doctors at the time ruled life-threatening, but he was later discharged, friends said.

Officers were waiting on patrol at a red light on Saturday when they heard gunshots and saw a man, later identified as Luna, running past them with a pistol, Chief Michel Moore told the Police Commission on Tuesday.

Believing they were being shot at, officers confronted Luna and shot him, Moore said. It is unclear whether he was hit by the first volley of bullets. Luna then ran north on Rampart, and officers chased him on foot; They caught up with him about half a block away in a residential area, shot him a second time, and killed him.

The police department’s account could not be independently verified.

There were no other injuries, although mourners at the vigil claimed at least one of the rounds fired by police had sailed into a nearby apartment building.

The LAPD scheduled a community meeting at the La Fayette Park Community Center Thursday at 6:30 p.m. to discuss the incident.

As with most fatal police shootings, it is being investigated by the department’s Force Investigation Division. The findings of the investigation are reviewed by Moore and the civilian-led commission; such reviews can take up to a year.

In most cases, the department releases police or surveillance camera video within 45 days of an incident.

Meet the Man Behind TikTok’s Most Influential Fit Account