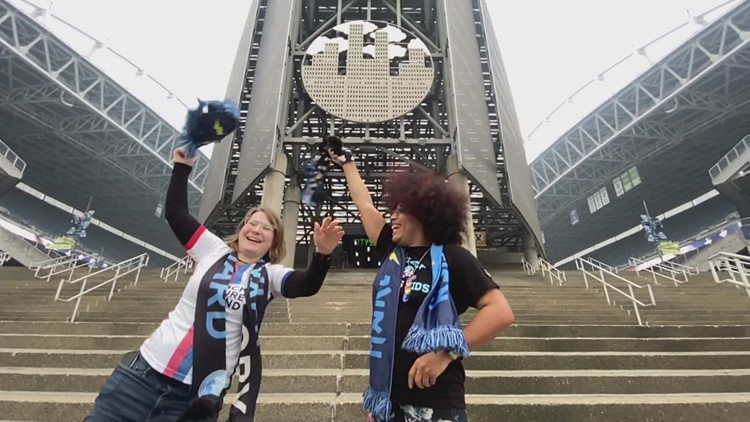 The OL Reign are now ranked first in the National Women’s Soccer League and are preparing to host Kansas City in Sunday’s playoff semifinals at Lumen Field.

SEATTLE – The OL Reign is ready for the fan support they’ve earned on the field over the past decade.

The OL Reign are now ranked first in the National Women’s Soccer League (NWSL) and are preparing to host Kansas City in Sunday’s playoff semifinals at Lumen Field.

Founded in 2012 as Seattle Reign FC, the team was one of eight founding members of the NWSL. The name was changed in 2019 to reflect the new French ownership and to pay tribute to one of Europe’s most iconic football brands, Olympique Lyonnais.

The Royal Guard Support Group is one of several official fan booster groups and has supported the team for a decade. Dei Caudle and Nicole Lynn Perry say they’re relatively new to the Royal Guard and love how inclusive and family-friendly the sport has become.

“It’s a real family feel, but very exciting and everyone’s welcome, so it really is the sport’s best kept secret in Seattle,” Perry said.

Caudle finds herself on crutches these days while recovering from a soccer injury but said she will be in the stands to cheer for the women because it’s always a fun experience and because she says they deserve it to feel the love.

“These are world-class athletes and they’re right here in our backyard!” said Caudle.

Reign Head Coach Laura Harvey is nominated for Coach of the Year. Harvey set the record as the most successful head coach of all time in the NWSL.

The team secured their third best regular-season record as a club and are looking to win their first playoff game since 2015.

Fans say this is the perfect time to hop on the bandwagon and support the OL Reign with record turnout. According to the team, they have broken their own attendance record three times this season.

“We started at Lumen with just 7,000 fans and only opened a lower section, but this weekend we were able to fill it!”

Seahawks getting plenty of production from trio of TEs