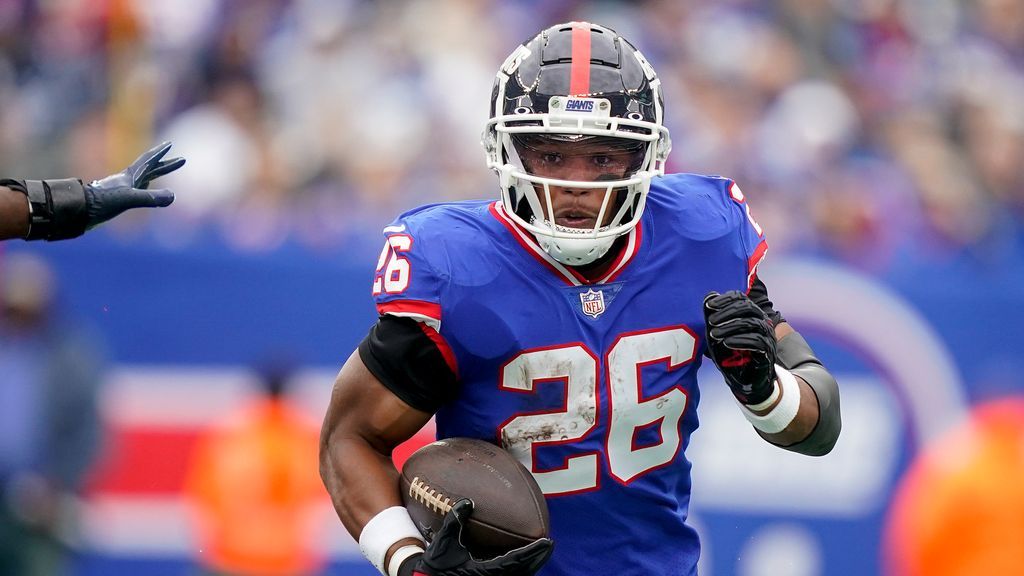 Rankings changes: No changes at the top, though it was nice to see statistical strugglers like Tom Brady and Russell Wilson improve their performance and solidify top 100 spots. It’s tough to deny how well Jared Goff and Geno Smith are playing as they force their way into stronger QB2 territory, pushing aside Washington’s Carson Wentz. Wentz is one of many starters that may not be starters for long. Taylor Heinicke (and PJ Walker, Andy Dalton and Teddy Bridgewater) may not be great, but any starters deserve attention in deep formats.

Trade for: The line of safe, reliable starters probably ends with Kirk Cousins in Minnesota, the No. 14 QB. Tua Tagovailoa is currently embroiled in some health controversy and isn’t assured of starting soon. One may not think Cousins and Derek Carr are awesome, but their consistent level of competence matters. The schedule starts to lessen for Brady, Wilson and Aaron Rodgers, so now may be a wise time to see if they are available for a trade. As for Lamar Jackson, his MVP campaign ran into a few stumbles against Buffalo, but hey, it’s Buffalo. They defend well.

Be cautious: Dak Prescott may return from his thumb injury as soon as Week 5, but trading for him is still a bit risky. However, trading for new Pittsburgh starter Kenny Pickett is fraught with peril. For one, he is a raw rookie and two, the Steelers play arguably the toughest schedule from now on. Also, assuming Tagovailoa stays healthy the rest of the season is risky.

Rankings changes: While he needs to work on holding on to the football, Melvin Gordon II is back in play as a flex option after Javonte Williams suffered season-ending ACL and LCL injuries, In addition, the Falcons will be without Cordarrelle Patterson for at least four games, making rookie Tyler Allgeier a potential flex option, though Caleb Huntley is in play as well.

Saquon Barkley takes over the top running back spot, with Jonathan Taylor falling outside the top 5. If Taylor needs a long absence due to his sprained ankle, there is no need for panic. Barkley and others are playing better. Austin Ekeler and Derrick Henry are back on track. Christian McCaffrey is piling on the yards and playing through whatever gets him deemed questionable and scaring fantasy managers each week.

Welcome to the top 20 to Miles Sanders, Dameon Pierce and J.K. Dobbins. Keep an eye out for Brian Robinson, for he may get his chance in the Commanders’ backfield as soon as this week.

Trade for: Barkley sure does look back to his rookie form , although the Giants continue to use him sparingly in the passing game. Pierce exploded for a 75-yard TD Sunday and should see plenty of touches. Perhaps the best sign was Davis Mills giving him six targets. Dobbins stole the goal line touchdowns away from Lamar Jackson, though nothing is permanent there.

Be cautious: McCaffrey is playing well but that is hardly a sure thing for 17 games, especially with Carolina playing so poorly. Kamara’s relatively surprising absence Sunday is probably no harbinger, but he hardly looked like the same player he was with Drew Brees before missing the London game. Do not trade for Patterson assuming he will take over the starting role as soon as he is eligible.

Rankings changes: It is great to see Mike Evans getting open and scoring touchdowns again after his one-game suspension. His colleague Chris Godwin also looked good on Sunday night, and may soon push into the top 20. CeeDee Lamb enjoyed his Sunday and should get his starting QB back soon. DK Metcalf and Chris Olave don’t care who plays quarterback and Michael Pittman Jr. and Terry McLaurin currently do.

Trade for: Metcalf at No. 15 may be the end of safe range for relying on wide receivers. Pittman should get on track, but the Indy offense is in flux. Amon-Ra St. Brown missed Sunday, but it shouldn’t be long-term. Olave really does look like a star. The Eagles shut down Christian Kirk, but they have a good defense and the Jags were playing in bad weather. Keep investing.

Be cautious: Romeo Doubs and Allen Lazard had good games but it remains dangerous to trade for them. It’s also hard to any of the receivers in Washington, though McLaurin is better than most. Darnell Mooney hauled in a long pass but the Bears are still struggling on offense. Marquise Brown is getting plenty of targets in Arizona but DeAndre Hopkins will return from his suspension and take some of those away soon.

Rankings changes: We have to give more love to Zach Ertz, as he is fourth in tight end PPR scoring entering Week 5. T.J. Hockenson roars into the top 5 off a monster game. Kyle Pitts frustrated fantasy managers again. If you’d rather rely on someone such as Will Dissly, go ahead. We wouldn’t but it is your team.

Elon Musk tells Twitter he wants to go ahead with original deal, according to Bloomberg

All 21 editions from worst to best