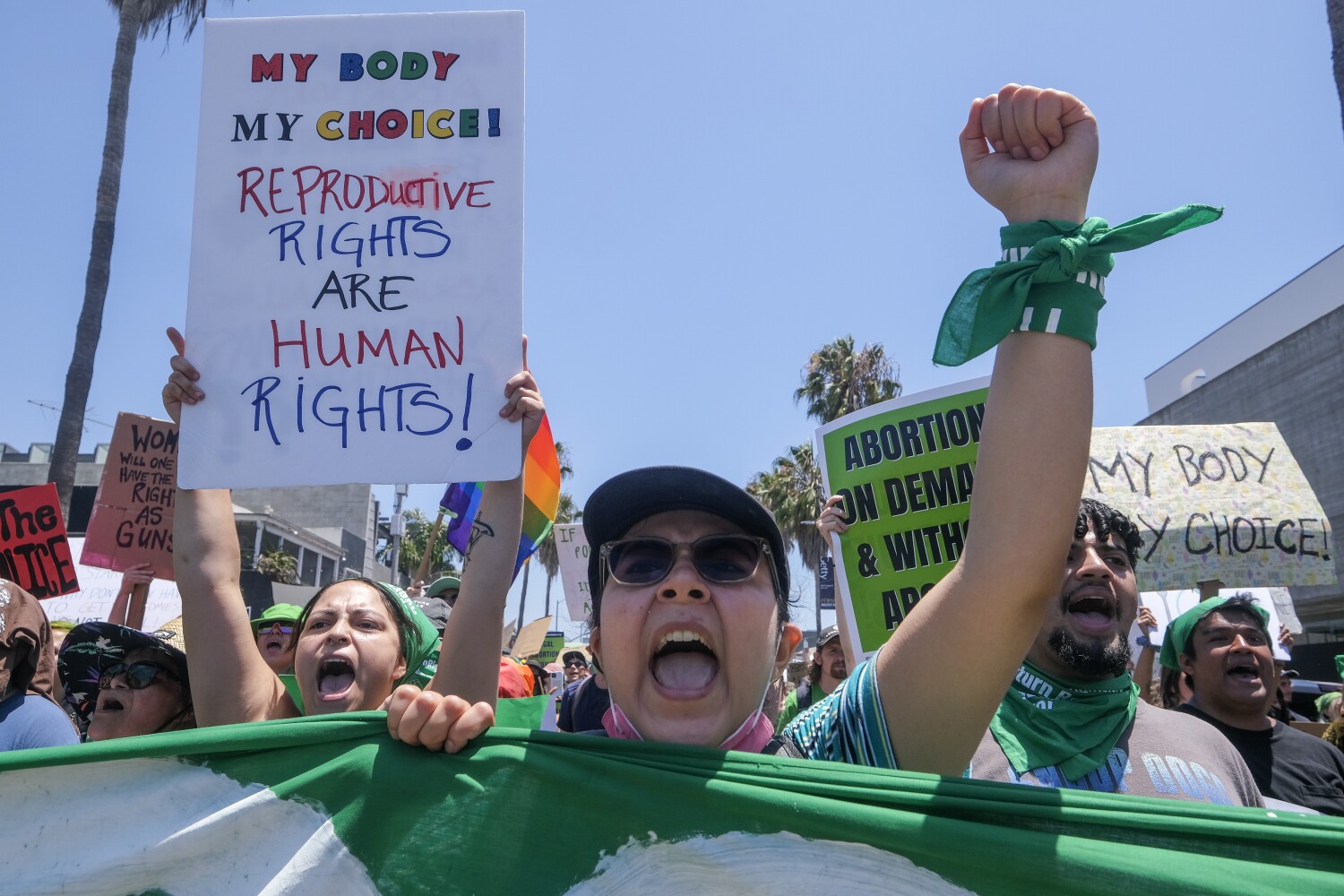 Anti-abortion demonstrations by far-right groups in several states in the weeks after the Supreme Court’s Roe vs. Wade inversion, including one on July 9 near the Planned Parenthood-Santa Monica Health Center and another held for scheduled for this weekend in Santa Monica has raised concerns from some law enforcement agencies about possible clashes and outbreaks of violence.

A far-right group, AmericanMade Patriots, will host a Babies’ Lives Matter protest Saturday morning at Palisades Park in Santa Monica, a representative for the group said.

Saturday’s demonstration follows a protest last week outside the Santa Monica Planned Parenthood Clinic that involved participants from the far-right neo-fascist group the Proud Boys, who marched in their signature yellow and black attire. They are expected to appear at the demonstration in Palisades Park.

In response, several abortion rights groups across Los Angeles are organizing counter-demonstrations in front of the health clinic on Saturday.

“They’re still a threat,” said Adam Lerman, a community organizer at the Coalition to Defend Affirmative Action, Integration & Immigrant Rights, and Fight for Equality By Any Means Necessary (BAMN).

BAMN was not aware of last week’s anti-abortion demonstration in time to form a counter-protest, Lerman said. The group has since shared flyers on social media and has spent this week working with other local abortion rights organizations.

“If we don’t act, they will definitely continue to grow and feel more courageous and empowered,” Lerman said, referring to far-right groups.

Social media posts from the July 9 demonstration in Santa Monica include videos of members of right-wing groups, some wielding weapons like knives and juice gloves, outside the Planned Parenthood clinic.

Lt. Rudy Flores, spokesman for the Santa Monica Police Department, said there was a verbal altercation between anti-abortion activists and pro-abortion protesters at the July 9 event, but no arrests were made.

“The priority at the SMPD and the City of Santa Monica is the safety of our residents and visitors while supporting peaceful protests, public gatherings and the rights of all individuals to exercise their First Amendment right to free speech,” Flores said in an emailed statement .

He added that the police department is aware of the demonstrations and counter-demonstrations planned for this weekend. Flores said the Santa Monica Police Department will station officers at both locations.

Stephanie Gutierrez, a BAMN organizer who is helping to coordinate Saturday’s counter-protests, said right-wing extremists have been emboldened by the Supreme Court ruling. This, in turn, has roused abortion rights activists.

“We will not wait for elections, ballot initiatives or courts to protect our fundamental rights,” Gutierrez said. “We will fight in the streets as the civil rights movement did and we will do so by any means necessary.”

Santa Monica Mayor Sue Himmelrich said local officials do not expect violence on Saturday. Nor are they expecting a large, centralized crowd of far-right protesters.

However, Himmelrich added, “We remain concerned about potential threats to our community and how this is affecting those who live in Santa Monica.”

Chris Reyes, who identified himself to The Times as the lead organizer of Saturday’s AmericanMade Patriots anti-abortion protest, said he urged members to remain non-violent and expected the demonstration to be peaceful.

“We don’t want to cause trouble,” he said. “We just want to be there to show people that it’s okay not to be afraid and to stand up for what you believe in.”

Reyes said that the Proud Boys were not originally invited to the demonstrations, but found out about the event through social media and word of mouth.

“We’re just trying to protect everyone, especially the women and children,” he said.

The Santa Monica protests are part of a growing trend among right-wing organizations staging anti-abortion protests nationwide, both before and after the Supreme Court decision.

Roudabeh Kishi, director of research and innovation at the Armed Conflict Location & Event Data Project, a nonprofit that tracks political violence and demonstrations, said there have been 30 abortion-related demonstrations since the beginning of the year, involving far-right groups in the across the country year – up from 10 in 2021 and four such events the year before.

“We’re worried about that,” Kishi said. “We are trying to examine how recent events have led to increased demonstrations.”

Kishi and other analysts say the rising activism of pro-choice advocates has been met with more aggressive tactics in response from far-right groups. Counter-demonstrations are more likely to turn violent when protesters on both sides are armed, Kishi said.

“It’s essentially the factors of a perfect storm,” Kishi said.

The numbers have also risen in California.

Gov. Gavin Newsom has said California will keep access to abortion legal statewide. According to the nonprofit organization, four far-right groups were involved in the demonstrations that took place in California this year.

Days after a draft Supreme Court decision supporting the overthrow of Roe vs. Wade was leaked in May, about 50 people consisting of members of the Three Percenters and AmericanMade Patriots marched to the Riverside Planned Parenthood clinic in an anti-abortion protest.

There were also about 30 counter-demonstrators. Members of both groups were visibly equipped with brass knuckles, but there were no recorded altercations.

Earlier this year, thousands of anti-abortion people attended a Walk for Life rally at San Francisco City Hall, including Catholic leaders and students and a small group of Proud Boys. There were about 100 counter-protesters in support of access to abortion, Kishi said.

The Department of Homeland Security warned of a possible rise in political violence in May after the Supreme Court’s draft advisory opinion was leaked.

DHS spokeswoman Tess Hyre said the agency is working with law enforcement agencies across the country to address possible acts of violence by right-wing extremists.

“Americans’ freedom of speech and the right to peaceful protest are fundamental constitutional rights,” Hyre said in an emailed statement. “However, these rights do not extend to violence and other illegal activities.”

TIME names Portland one of 'Greatest Places in the World'