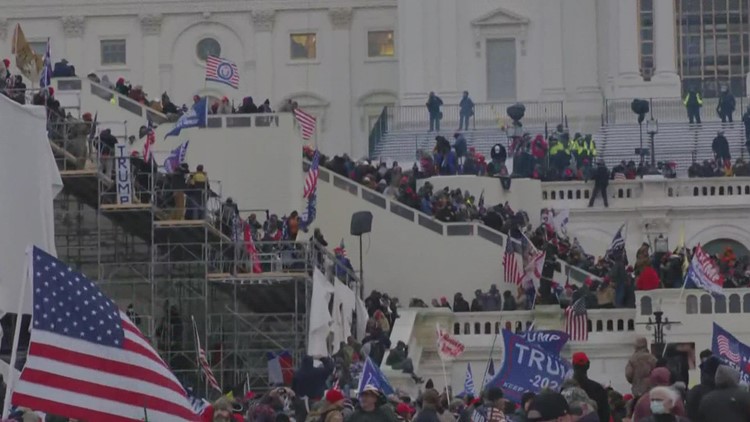 The trio are facing six separate misdemeanor charges for their participation in the January 6, 2021 Capitol riots.

PUYALLUP, Wash. — A father and his two sons from Puyallup are facing six misdemeanor charges for their alleged involvement in the Jan. 6 Capitol riots.

Kevin Cronin Sr., Kevin Cronin II and Dylan Cronin were arraigned Monday in the US District Court in Tacoma for their alleged involvement in the riot that left more than 100 police officers injured. At least nine people who were there died during or after the riots.

According to a criminal complaint, Kevin Cronin II was a member of the Washington Army National Guard at the time of the riots. Dylan Cronin was assigned to the US Army Reserves.

At around 2:12 p.m., open-source video captured a person believed to be Dylan Cronin kicking the outer door of the Senate wing and using a piece of wood to break part of the door’s glass , according to the criminal complaint.

A minute later, video captures a person believed to be Dylan Cronin entering the US Capitol through a window.

Kevin Cronin Sr. and his two sons then meet at the Capitol.

The three exit the building at around 2:20 p.m

Kevin Cronin II and Dylan Cronin are seen minutes later re-entering the building. The two then wander through parts of the building, according to the criminal complaint.

The three were identified after the FBI obtained footage from Google showing at least two cell phones linked to the family’s Puyallup address were on the Capitol grounds at the time of the Jan. 6 riots. Vehicles belonging to Kevin Cronin II and Dylan Cronin were observed at the Puyallup home during the three months of court surveillance.

A US Postal Service supervisor who works with Kevin Cronin Sr. reviewed photos of the Capitol Building and said the person looked like him but wasn’t sure. According to the criminal complaint, a postal inspector who gave a briefing in February said that despite Cronin Sr. wearing a mask, the visible portion of his face appeared to match the man in the photos.

The Washington Department of Defense confirmed Kevin Cronin II was released from the National Guard in August 2021.

How Does Russia Lose in Ukraine? Putin May Tell Us Monday