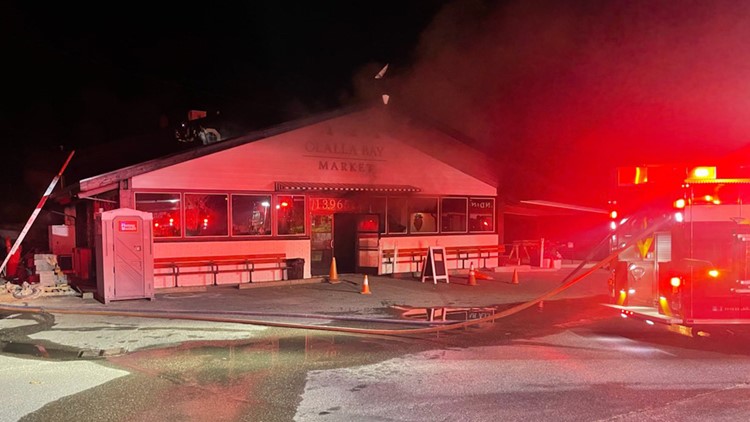 KITSAP COUNTY, Wash — The historic Olalla Bay Market in Kitsap County was damaged in a fire early Tuesday morning. Since 1884 the property has been a meeting point for the community.

Crews responded to the 2-alarm fire at the market at approximately 2:15 a.m. at Block 13900 of Crescent Valley Road Southeast. Firefighters were able to get the fire under control by 3 a.m South Kitsap Fire & Rescue (SKFR).

The waterfront shop is a pillar of the community of Olalla, Washington, located on the Kitsap Peninsula west of Vashon Island.

Shop owner Gregg Olsen told KING 5 crews at the scene the damage to the building looked “pretty bad”. Much of the fire and smoke damage was confined to the back kitchen area of ​​the market.

“It turned out that it wasn’t really flames, but a large plume of smoke at the back of the building,” Olsen said.

Olsen said there were about nine or ten fire trucks on the market when he arrived.

PILLAR OF OLALLA: Close-knit community devastated after 2:15 am. A fire severely damaged the Olalla Bay Market under construction. The Landing, a meeting place since 1884. October market opening date now unclear; no injuries, cause under investigation. Many come to help. pic.twitter.com/jisSxx2K92

“We live very close by and really appreciate how quickly the Kitsap team got here to help,” said Olsen.

Olsen is a bestselling author and a prominent resident of the community. He became the owner of the market a few years ago and is working towards reopening the store. A reopening was scheduled for early October, but now the reopening may not go ahead as planned.

Olsen said his family will be focused on the next steps towards reopening and thanked the community for their support so far.

“It’s not just about me and my family, our community has worked so hard and we’ve had so many volunteers and help,” Olsen said.

“Knowing this has fire is hard,” said a local resident who stopped by the store Tuesday morning. “It’s hard but we will all be there to rally around this family and do whatever we can to help them get back on their feet.”

SKFR said The fire was extinguished and crews had cleared the scene by 7am. The Kitsap County Fire Marshal is investigating. The cause of the fire is currently unknown.

Behind the Wheel of the Rivian R1S, the World’s Most Hyped Electric SUV

Rachel Bilson Says Split From Ex Bill Hader Hurt Like a “Mofo”, But Still Misses His “Big D-k”: “We Can Keep That”