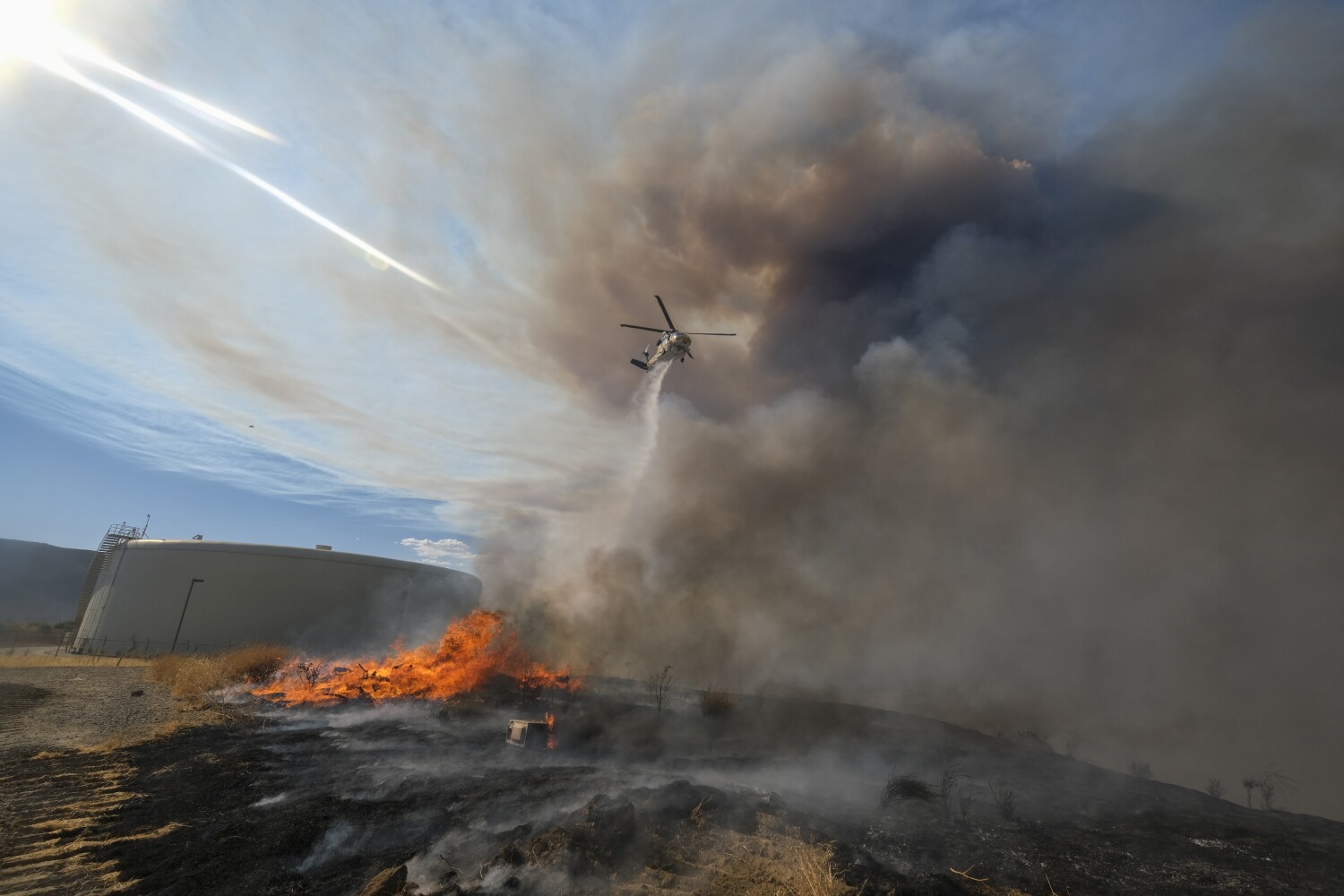 Southern California experienced its most intense heatwave of the year as firefighters battled large blazes that forced evacuations and the state was on flex alert for extreme power demands that officials warn could cause blackouts.

The heatwave is expected to last into next week, perhaps even Wednesday, bringing extreme temperatures and increasing the risk of fire in both inland and many coastal areas.

Firefighters made some progress Thursday in their fight against a wildfire near Castaic that had burned more than 5,000 acres overnight.

The fire, the so-called route fire, had exploded over 5,208 acres overnight and was 12% contained as of Thursday morning, according to an incident update by the Los Angeles County Fire Department.

One structure had been destroyed and 550 others remained threatened. No civilian casualties were reported, but seven firefighters were injured.

A heli-tanker and other air resources were deployed throughout the night to fight the blaze. Officials planned to deploy additional aircraft Thursday and use ground resources in the morning hours before daytime temperatures soared.

But the low humidity, excessive heat and steep terrain are jeopardizing the efforts of responders. According to the incident report, teams are focused on containing the fire west of Castaic Lake, east of Palomas Canyon, south of Fall Creek and north of Lake Hughes Road.

Officials are scheduled to hold a press conference at 10:00 a.m. with further updates.

The fire was first reported just after noon Wednesday along Freeway 5 near Lake Hughes Road, prompting full closures in both directions. According to the California Department of Transportation, one northbound lane and two southbound lanes between Lake Hughes Road and the Templin Highway remained closed Thursday. There was no time when they might reopen.

The evacuations south of Northlake Hills Elementary School were lifted Wednesday night, according to the LA County Sheriff’s Department.

Videos from KTLA-TV Channel 5 show parts of the fire creating swirls of fire on Wednesday afternoon. At least 250 county firefighters have been assigned to the blaze along with 115 U.S. Forest Service firefighters, eight air tankers and nine helicopters. Seven firefighters are said to have been injured.

Little said the fire was fueled by fuel that had been parched by years of drought.

Woodland Hills reached 112 degrees, breaking the previous daily record of 111 degrees set on Aug. 31, 1998, according to the Oxnard office of the National Weather Service.

The temperature could continue to rise “and probably isn’t done yet,” meteorologists said.

Burbank’s high of 112 broke the previous daily record of 108 degrees set in 2017, and Sandberg hit 100 degrees, surpassing the previous high of 98 degrees, also in 2017, the weather service said.

Authorities are concerned about power capacity in part because high temperatures are forecast not only in the inland regions that typically breed at this time of year, but also on many parts of the coast. That could mean many more people reach for air conditioning during peak hours.

Officials are urging Californians to limit power usage where possible to minimize the burden on the state’s utilities or risk blackouts. A power outage in such extreme heat can be very dangerous, if not fatal, especially for the most vulnerable.

California officials issued the first statewide flex alert Wednesday during this heat wave as most of the state faced extreme heat. A second flex alert was issued for Thursday.

During a flex alert, consumers are encouraged to reduce their energy consumption during the afternoon and evening hours when the grid is at its busiest due to high demand and less available energy from solar panels.

The Rise of the Rainbow Watch

Twitter edit button: Here’s when some users can edit tweets

Hundreds of Somali-American Youths Held Captive in Rehab Centers; 'They Were Torturing Me'