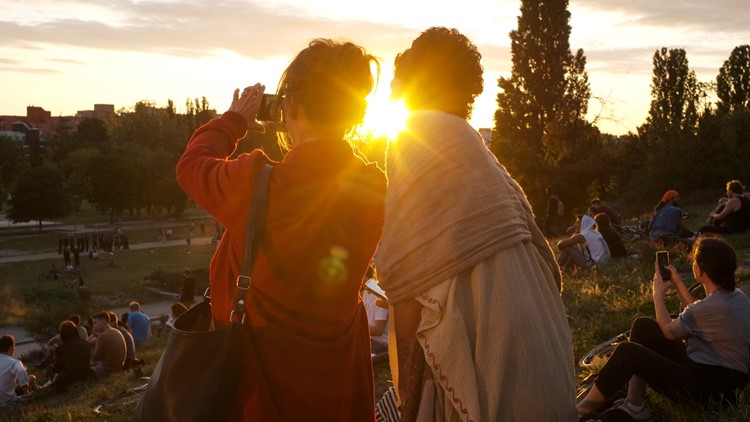 Here’s your guide to officially starting summer – and how an old celebration gets a little more high-tech.

The past few days have felt summery enough for most Americans, but the season doesn’t officially start until Tuesday.

Tuesday 21st June is the summer solstice – the longest daylight hours of the year and the official start of summer. The North Pole tilts closest to the Sun at 5:14 am EDT, 4:14 am CDT, or 2:14 am PDT. The Sun shines year-round directly over the Tropic of Cancer—its northernmost point.

This is exactly the moment when astronomical summer begins in the northern hemisphere. (The temperature-based meteorological summer, used primarily by researchers studying weather and climate, began on June 1.)

The summer solstice brings the longest daylight hours of the year. The further north you are from the equator, the more daylight you get. Daylight hours gradually decrease until the winter solstice in December.

Hours of daylight at the summer solstice. pic.twitter.com/O7F2v4ngu4

What Causes the Summer Solstice?

Solstices and seasons occur because of the tilt of the earth. You can think of Earth’s axis as an imaginary pole running through the center of the planet from top to bottom, NASA explains. The earth revolves around this pole, making one rotation every day, causing day and night.

This axis is tilted at about 23.5 degrees. The northern hemisphere is tilted towards the sun in June, resulting in more direct light and warmer temperatures.

Who Celebrates the Summer Solstice?

Humans have been following and celebrating the progress of the sun for a very long time. One of the reasons people built monuments like Stonehenge in England and the Torreon in Machu Picchu was to follow the sun’s path and predict its movements, NASA says.

The celebrations continue around the world today – some with a touch of high-tech. English Heritage, who care for Stonehenge, are planning to livestream sunrise and sunset from the ancient stone circle. Thousands flock to the monument each year to celebrate the solstice, although in-person celebrations have been canceled in 2020 and 2021 due to the pandemic.

Student-Loan Forgiveness Is Really a Bailout for Woke Higher Ed