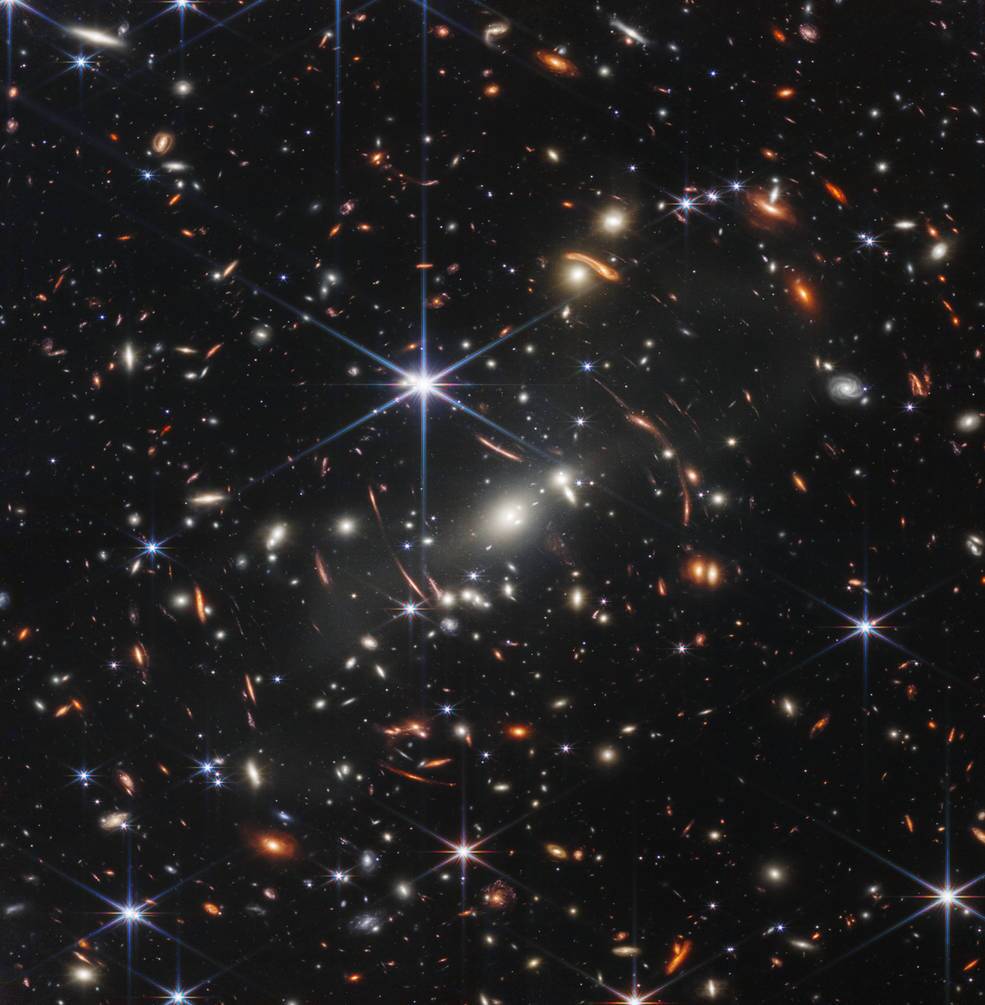 Billions of years ago, long before a swirling cloud of gas and dust formed towards the Sun, light left the earliest stars and began a long journey through space.

The light has traveled since then, covering trillions and trillions of kilometers. It raced through galaxies and their nascent stars, some accompanied by planets. And on one of these, a species evolved with the ability not only to question what might be out there, but to build tools to see what their own eyes couldn’t see.

On Monday, the world got its first glimpse of this ancient light thanks to NASA’s James Webb Space Telescope, the most advanced and ambitious space-observing instrument yet built.

It’s a snapshot from space, the light from countless galaxies swirling around a central point like the light from a disco ball. Flanked by President Biden and Vice President Kamala Harris, NASA Administrator Bill Nelson unveiled the image at a White House press conference.

“If you hold a grain of sand on your fingertip at arm’s length, that’s the part of the universe you see — just a small speck of the universe,” Nelson said.

Webb is the successor to the Hubble Space Telescope, which transformed science’s understanding of the vastness of the universe. One of Hubble’s most famous images, the eXtreme Deep Field, shows flares representing about 5,500 galaxies, the faintest of which take us 13.2 billion years into the past.

With Webb, astronomers can zoom in on Hubble’s faintest spots.

“It’s an emotional moment when you see nature suddenly revealing some of its secrets,” said Thomas Zurbuchen, deputy administrator of NASA’s Science Mission Directorate. “It’s not a picture. It’s a new worldview. You will see nature reveal secrets that have existed for many, many decades, centuries, millennia.”

Webb can literally see galaxies far, far away as they were a long, long time ago – just a few hundred million years after the Big Bang. It intercepts light in the infrared part of the spectrum, whose wavelengths are too long to be visible to the human eye.

Webb was built at Northrup Grumman’s Space Park in Redondo Beach and launched from French Guiana on Christmas Day. His target was L2, a scientific abbreviation for the second LaGrange point, about 930,000 miles from Earth. It’s one of five places where the gravitational forces of the Sun and Earth are balanced, allowing Webb to maintain a fixed distance from our planet.

It took almost a month for the telescope to get there. Then, over the course of two weeks, the telescope slowly and deliberately deployed.

A complicated system of latches, cables, and pins released a five-layer sunshade the size of a tennis court. Once that was in place, the telescope’s 18 hexagonal mirrors pivoted into place, creating a honeycomb-like structure 21 feet in diameter. The process wouldn’t have looked out of place in an episode of Transformers. (In fact, NASA released a short video about Webb with Peter Cullen, the actor who voiced Optimus Prime in the original 1980s cartoon.)

Each mirror is coated with 100 nanometers of gold to enhance its ability to reflect infrared light. They were carefully aligned by focusing on a star unwieldy named 2MASS J17554042+6551277. The test image, released to the public in March, showed a brilliant star that appeared to emit light from six points, a feature of the telescope’s hexagonal mirrors.

But the background caught scientists’ attention: behind the star were myriad patches of light, each representing a galaxy billions of years old.

It was an enticing glimpse of the telescope’s capabilities.

Launched in 1990, Hubble has provided unprecedented insights into the cosmos throughout its decades of operation. His observations have helped scientists determine the age of the universe and the rate of its expansion, along with the discovery of black holes, dark moons, and exoplanets.

But Webb is exponentially more powerful. Its mirror is six times larger than Hubble’s, meaning it can collect much more light and see further into the past. It also has far greater ability to study infrared light.

Webb wouldn’t work if it was where Hubble is. The newer telescope is so much more sensitive that it would be overwhelmed by light and heat from the Earth, Moon and Sun. But its distance also means it’s too far away to be manually repaired by astronauts in space, as Hubble has been five times since launch.

Hubble had been in the skies for less than a decade when NASA started talking about the technology that would eventually replace it. Construction of the new telescope, named after NASA’s second administrator, began in 2004 with a budget of $1 billion and a planned launch date of 2010.

But the budget and schedule grew almost as fast as the universe it was designed to explore.

The team not only had to ensure that the telescope’s materials and technologies would function properly once it was launched into space. In many cases, they also had to reinvent these materials from scratch given the groundbreaking nature of the device.

The segmented cryogenic mirrors, the five-layer sunshade, the microshutters that capture infrared light—all of these had to be conceived and tested in the lab before they could be fabricated for use on the telescope.

Its rising costs eat into budgets for other NASA projects. In 2011, Congress introduced legislation to halt the project entirely. If such a big risk fails, “the progress of astronomy could be set back a generation,” the journal Nature warned in 2010.

Don’t Cancel the Classics, Broaden and Diversify Them