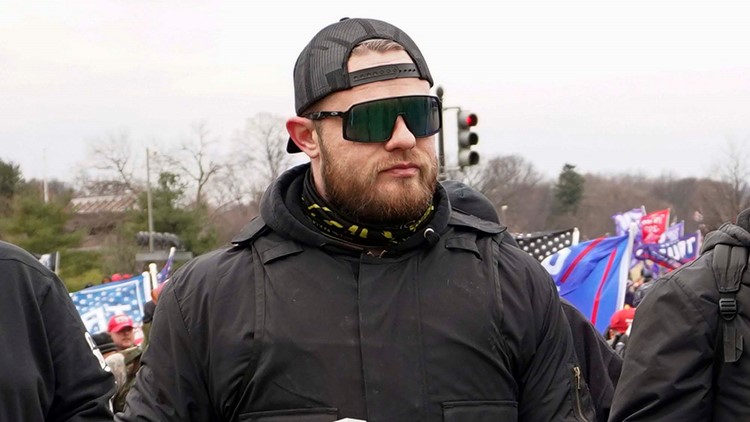 Ethan Nordean of Auburn, Wash., and four other accused Proud Boys leaders face a new charge of seditious conspiracy in connection with the January 6 riot in the US Capitol.

WASHINGTON — A federal grand jury on Monday returned a new indictment of seditious conspiracy against five accused Proud Boys leaders — upping the stakes in one of the Justice Department’s high-profile Jan. 6 cases.

The five defendants in the case – Ethan Nordean, Joseph Biggs, Nachary Rehl, Dominic Pezzola and former Proud Boys leader Enrique Tarrio – were all previously charged with conspiracy and obstruction of an official process. Nordean, Biggs, Rehl and a fourth defendant, Charles Donohoe, were charged last March. Pezzola, who was charged separately a week after the Capitol riot, and Tarrio were added to the case in March. Donohoe pleaded guilty in April to two counts of obstructing an official process and assaulting a federal agent.

In the new indictment, prosecutors allege the men conspired to use force to “prevent, obstruct and delay” transfer of power laws, including the 12th Amendment. Insurgent conspiracy, like the two previous cases of conspiracy and obstruction of affairs the men face, carries a maximum sentence of up to 20 years in prison.

In the indictment and previously filed court documents, prosecutors say Nordean, Biggs, Rehl and other defendants have repeatedly spoken out about their desire for violent conflict should former President Donald Trump lose the election. In a message posted to social media two days after the election, Biggs reportedly wrote, “It’s time for a f***ing war if they steal that shit.” In another post, Nordean reportedly wrote, “The ghost of 1776 has reappeared.”

Prosecutors allege that Tarrio – who was not in DC at the time due to an arrest on gun charges but is accused of remotely coordinating Proud Boy’s operations – released a nine-page document on Jan. 6 titled “1776 Returns.” had set out a plan to occupy “crucial buildings” in DC

MORE: Indictment alleges Enrique Tarrio and other Proud Boys leaders had a plan to occupy ‘key buildings’ in DC, including the House and Senate office buildings. pic.twitter.com/WmS4xNjTyE

One of the defendants, Pezzola, is accused of using a stolen police riot shield to smash a window in the US Capitol building – allowing the very first rioters to enter. Dozens of other Proud Boys have been charged with joining the attack on the Capitol and the outnumbered police trying to defend it. At least four members of the group have pleaded guilty to serious crimes related to the riot, including Donohoe, Pezzola’s former co-defendant Matthew Greene, Missouri Proud Boy Louis Enrique Colon, and most recently Joshua Pruitt, a former DC resident.

Monday’s indictment brings the total number of January 6 defendants charged with seditious conspiracy to 16. In January, 11 members of the Oath Keepers, including founder Stewart Rhodes, were indicted on the same charges. Three Oath Keepers charged with sedition – Joshua James, brian ulrich and William Todd Wilson – have since pleaded guilty to the charges and have agreed to cooperate against their former co-defendants.

In court documents filed last March, prosecutors said Florida Oath Keepers leader Kelly Meggs boasted about forming an “alliance” between militia groups and the Proud Boys, allegedly writing in a Facebook message : “We decided to work together and close this shit. * Down.” The FBI has also said it is investigating a meeting between Tarrio and Rhodes, along with others, on January 5, 2021 in a downtown DC parking garage. To date, however, prosecutors have had no formal cooperation between the groups claims.

The government’s trial of the five indicted Proud Boys leaders was scheduled to begin August 8 before US District Judge Timothy J. Kelly. The Oath Keepers, charged with seditious conspiracy, are due to go to trial at the end of September, with a second group not charged with sedition being expected to face a jury in November. A number of members of both groups, including Tarrio and Rhodes, are also named as defendants in multiple civil lawsuits filed by Congressional Democrats, US Capitol Police officials and the DC Attorney General’s Office related to January 6th.

Missed Connections in the Minor Leagues