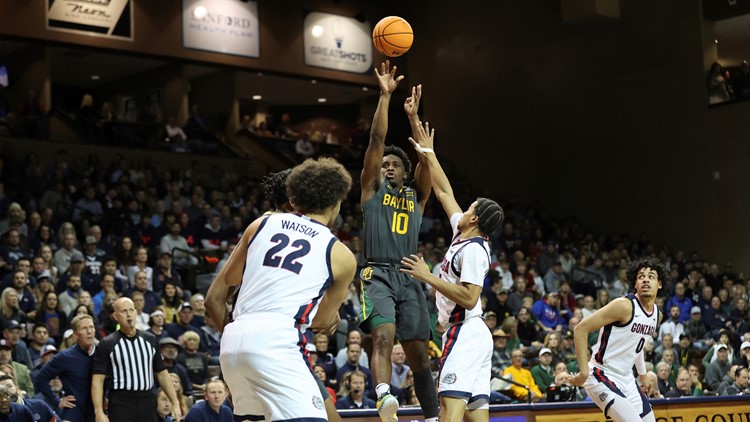 Adam Flagler hit a pair of 3s as No. 6 Baylor scored the last eight points of the game to edge past No. 14 Gonzaga 64-63 on Friday night.

After Gonzaga’s shot clock was broken, Flagler’s 3-point attempt for the lead was wide, but teammate Jalen Bridges was fouled on the rebound attempt by Drew Timme. Bridges hit two free throws with 16 seconds left for the lead.

The Zags (5-3) had one last chance when Bolton caught an inbound pass near his own foul line with 4.6 seconds left. He drove the lane, but his off-balance shot went off the glass and missed as the buzzer sounded.

Baylor led by as much as 12 points in the first half before Gonzaga closed to five at the break.

Baylor: The win was a major setback for Baylor after his 26-point loss to Marquette earlier in the week. The loss was the Bears’ most one-sided since they fell to Kansas 82-56 in 2007

Gonzaga: After being ranked #2 in the AP preseason poll earlier in the season, the Zags have now lost two out of three.

Baylor: The Bears return home on Tuesday to host Tarleton before taking on Washington State for the Pac 12 Coast-to-Coast Challenge on Sunday in Dallas.

Gonzaga: The Bulldogs return to Spokane for three straight games starting Monday when they face Kent State for the first time in school history.

Have you called 988 during a mental health crisis? We want to hear from you

Can anyone in the NHL catch the Boston Bruins?

“Steph is not Steph… What if Luka and company carry this momentum?”