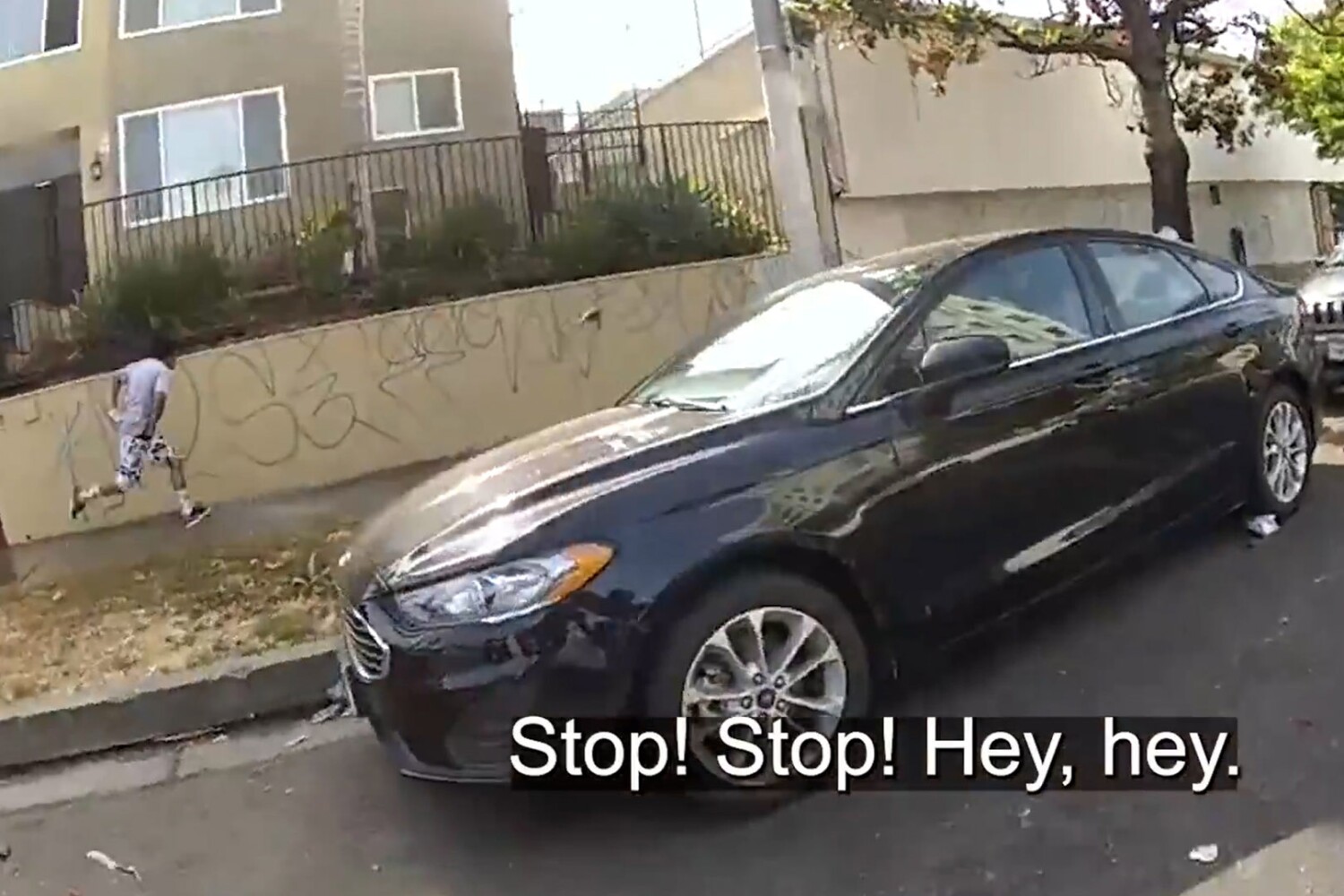 In the weeks after a Los Angeles police officer fatally shot a man in Koreatown, LAPD officials said little about the murder.

The department broke its silence on Friday when it released video footage of the fatal encounter from cameras worn by officers.

However, rather than clarifying what happened, the video has injected more uncertainty into the incident by not resolving a crucial question: Did Marvin Cua cause the shooting by pointing a gun he was carrying at the officers, how the LAPD claims?

The video uploaded to the LAPD’s YouTube page includes a report by Capt. Kelly Muniz, a spokeswoman, on the course of the shooting, followed by excerpts from a 911 call and footage of the shooting.

In her account of the shooting, Muniz said officers responded to a call from a man with a gun and summarized what happened: “Officers followed the suspect on foot for a short distance; As officers gave chase, the suspect removed a pistol from his waistband, pointed it at the officers and a shootout ensued, involving officers.”

But the following footage doesn’t show Cua doing that.

Video from a camera carried by an officer riding in the passenger seat of a squad car begins as the vehicle pulls up next to Cua, who was walking on a sidewalk with another man. The officer, whom LAPD identified as Christopher Jongsomjit, yells at the men to stop. Cua, who was 23, turns and runs down the sidewalk in the opposite direction.

Jongsomjit gives chase. A parked car briefly blocks his view of Cua, who reappears and takes a few more steps before Jongsomjit fires a single shot about four seconds after Cua starts running.

After his initial stop order, Jongsomjit says nothing to Cua or his partner before firing. He first mentions Cua’s gun after Cua is shot and lies motionless on the ground.

The video initially plays at normal speed and it is difficult to see Cua running. The LAPD then edited the video to play in slow motion. Twice the video freezes and zooms in on Cua to reveal the gun in his hand. At the slower speed and in the stills, Cua cannot be seen pointing the gun at the cop and appears to be looking away from the cop as he runs.

Citing the department’s ongoing investigation into the shooting, Muniz declined to discuss the apparent discrepancy between her statement that Cua pointed his gun at the officers and the video. She warned that videos of shootings released by the department “do not constitute a full investigation.”

“These videos are being produced to provide a description of the incident based on the information we have at the time,” she said in an email.

And in her statement accompanying the video, Muniz said that because of the position they are mounted on the officer’s chest, “the angle of the camera prohibits viewers from seeing everything the officer saw and experienced.”

For years, videos of shootings or other serious incidents captured by LAPD officers’ body-worn cameras were usually kept secret as department officials resisted calls for their release. Then, in 2018, the civil commission overseeing the department ordered the videos released within 45 days, saying the change was necessary to increase transparency. The new rule has allowed the public to see firsthand how officers behave during violent, dangerous episodes, but as the Cua shooting shows, the videos have limitations.

Cua died at the scene. According to video, a .22 caliber handgun was found next to his body. Police said he was pulled over because he matched the physical description of a suspect reported by a 911 caller.

At around 9 a.m. on June 2, the caller to the dispatcher said a man on South Berendo Street near 8th Street in a white tank top and black-and-white shorts had pointed a gun at some children.

Jongsomjit and his partner responded and spotted Cua, who was wearing a white T-shirt and black and white shorts, walking in the area with another man.

“Yo yo, stop right there you two,” Jongsomjit shouted as he got out of the squad car, the video shows. “Stop! Stop! Hey! Hey!”

Jongsomjit drew his pistol and pointed it at Cua while chasing him. Without warning, he fired a single shot.

Cua continued to run into the parking lot of a nearby mall, where he collapsed between a parked car and a truck.

In the video, Jongsomjit can be heard directing another officer to make a radio call for help and warning officer Cua “has the gun on him”. Jongsomjit repeatedly yells, “Let me see your hands!” at Cua, who was lying motionless on the sidewalk.

Other officers came and a group of them approached Cua and handcuffed him. One of them checked the pulse. When Cua found none, his handcuffs were removed and an officer began CPR.

Coroners declined to release information about Cua, saying an autopsy report would not be publicly available for several months. This account will likely shed light on how Cua was positioned in relation to Jongsomjit when he was shot by noting where on his body Cua was hit and the bullet’s trajectory.

Margaret Hellerstein, an immigration attorney, said she first met Cua more than three years ago when he was being held at the Adelanto Immigration and Customs Enforcement processing center and represented him on his asylum application. The two later became friends, she said.

Hellerstein said Cua was from Guatemala and his full name was Marvin Cua Sapon. Medical records, she said, showed he had been diagnosed with schizophrenia and battled depression, which she says contributed to several clashes with police.

Since his release from immigration detention last winter, Hellerstein said, Cua has taken odd jobs to pay the bills, splitting his time between staying with his mother, a friend in Koreatown, and occasionally on the streets. He found solace in drawing, for which, according to Hellerstein, he had shown a real talent.

“He was an incredibly talented artist, he spoke softly, he was generous, he was funny. I know he wasn’t a saint, but he had a huge heart. I really loved him,” said Hellerstein, who has started a GoFundMe page to help his family pay for funeral expenses and, if there is any money left over, pay a lawyer while the family pursues a possible lawsuit over his death .

The Office of the Inspector General will oversee the LAPD’s investigation into the shooting. An internal department panel will review the findings and advise Chief Michel Moore on whether Jongsomjit’s decision to use deadly force was appropriate. Moore, in turn, will make a recommendation to the Civilian Police Commission, which will vote on whether the shooting was consistent with department policy.

Under LAPD policy, an officer is permitted to use lethal force against a fleeing suspect if the suspect is believed to have committed a “crime which threatens or resulted in death or serious physical injury” and the officer believes , based on the “all of the circumstances” that the suspect “will cause death or serious bodily harm to another if not arrested immediately”.

Trials of police shootings are generally guided by a 1989 Supreme Court ruling that established an “objectively reasonable” standard for determining whether an officer’s use of force was justified.

A handful of states, including California, have attempted to set their own more stringent standards. In 2019, the California legislature changed the legal standard for when officers can use deadly force from “reasonable” to “necessary.”

After seeing video of Cua’s shooting, William Terrell, a criminal justice professor at Arizona State University, asked why the department would suggest Cua point his gun at officers when the act wasn’t caught on camera. He also asked if officials might have taken a different approach that didn’t appear to escalate the situation.

“I don’t know if that’s their training tactic, slowly driving open-doored at someone who is reportedly armed,” said Terrell, associate dean at the school’s Watts College of Public Service and Community Solutions. “I found that a bit strange.”

The incident is one of eight fatal LAPD shootings so far this year, three of which occurred last week.

After hitting a 30-year low in 2019, police shootings rose last year. LAPD officers opened fire 37 times in 2021, killing 18 people, an increase from the 27 shootings by officers in 2020, seven of which were fatal.

Given last year’s spike, LAPD chief Michel Moore previously said the department will review how its officers are trained to use deadly force. Moore told the police commission at the time that the LAPD would examine its training program “extensively” to assess whether it adequately outlines existing department policies, which have become stricter in recent years, and gives officers “reverence for the human being.” clarifies life” that is required of them.