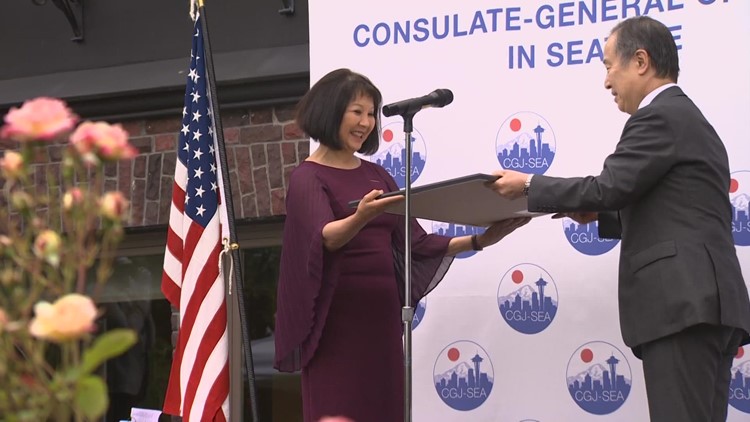 During Ambassador Koji Tomita’s visit to Seattle, Lori Matsukawa received the Order of the Rising Sun, Gold and Silver Rays.

Matsukawa is a recipient of the Order of the Rising Sun, Gold and Silver Rays in “recognition of her contributions to promoting friendly relations between Japan and the United States.” She accepted the award during a small ceremony hosted by the Japanese Consul General in Seattle.

“This is a real honor and excitement for me because I’ve been working really hard over the past few years to connect people in Japan and people in the United States person-to-person,” Matsukawa told KING 5.

Matsukawa received the award in recognition of her contribution to improving the understanding of Japanese-Americans in the United States.

“There are many people in Japan who just don’t know what the Japanese have achieved in America,” she said.

“I think if you knew the history of the Japanese in America, you would know how many Japanese-Americans were imprisoned during WWII – despite tremendous discrimination, found their way back and became successful citizens themselves – I think that people in Japan would be like that.” proud and so happy that the Japanese did so well,” she added.

Matsukawa served as President of Washington’s Japanese Culture and Community Center, a venue to share and promote Japanese and Japanese-American culture and heritage.

During her career, Matsukawa has been recognized with a Lifetime Achievement Award from the Asian American Journalists Association (2005), induction into the University of Washington Communication Department’s Alumni Hall of Fame (2012), and the NATAS Northwest Silver Circle Award. excellent. for Lifetime Achievement (2014) and a 2018 Regional Emmy Award for her series, Prisoners in Their Own Land, about Japanese-American wartime imprisonment.

Lori was also instrumental in founding a chapter of the Asian American Journalists Association.

In her 36 years at KING, Matsukawa has covered the 50th anniversary of the Pearl Harbor attack, the 2002 and 2010 Olympics, presidential politics in Iowa, the 70th anniversary of KING 5, and the Japanese American Americans’ struggle for redress after the imprisonment during World War II.