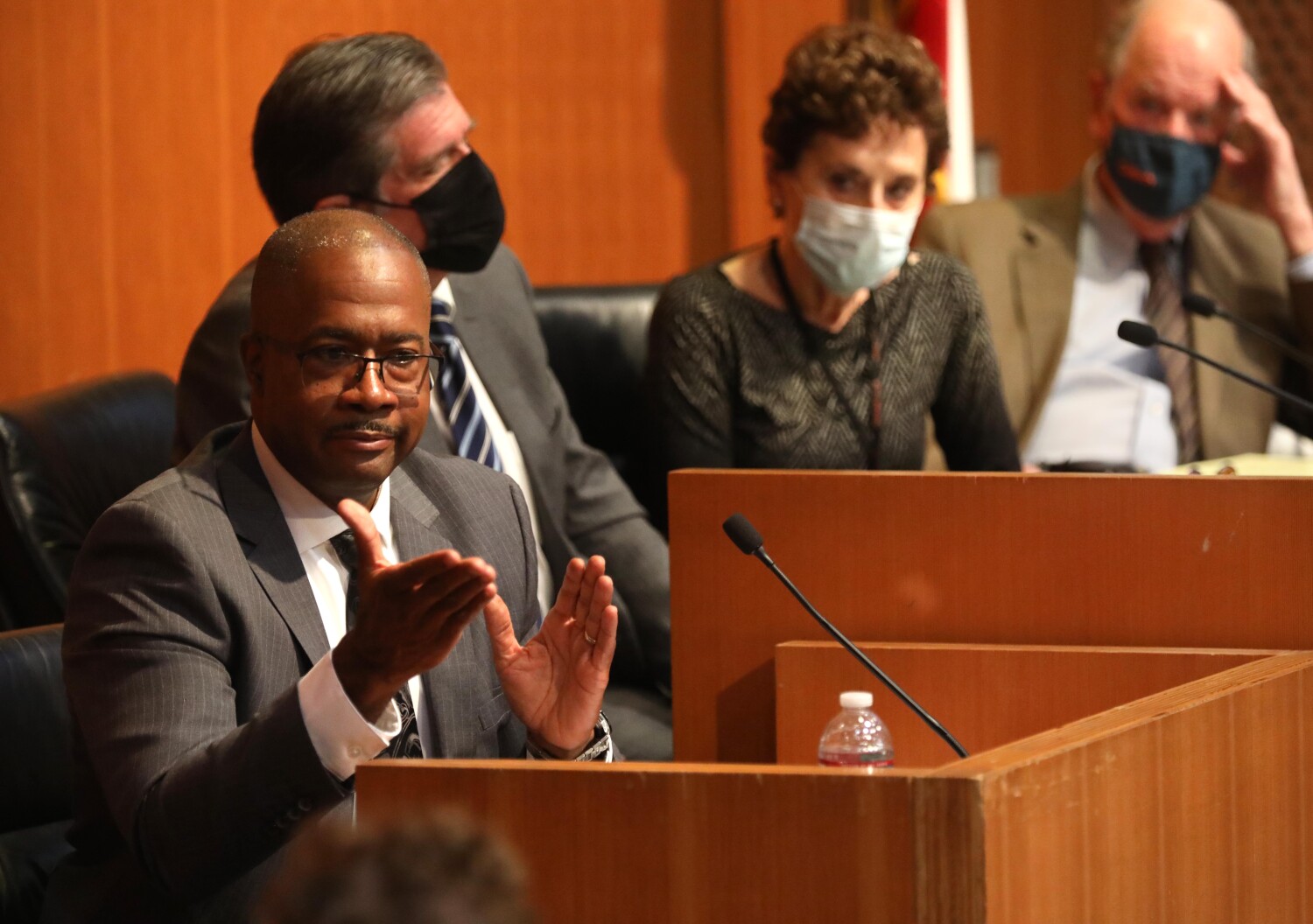 At Los Angeles County Sheriff Alex Villanueva’s inauguration ceremony in 2018, a portion of the front section seats were cordoned off for deputies at the East LA Sheriff’s Station.

The special treatment raised eyebrows. The station was under scrutiny at the time for an alleged attack on MPs from the Banditos – one of the controversial groups scattered across the department and often dubbed “surrogate gangs”.

Matthew Burson, at the time a captain in the sheriff’s department overseeing a criminal investigation into the attack, took special note.

“You’re the sheriff of the entire county — you don’t single out one station as your favorite,” Burson, who was promoted to chief from Villanueva and is now retired, testified before the Sheriff’s Civilian Oversight Commission on Friday.

Burson appeared as part of the commission’s ongoing public hearings on the “proxy gangs” that have plagued the department for decades. Under oath, Burson said he was ordered to direct the investigation away from the Banditos, confirming a written statement filed in a lawsuit last month in which Burson said he was ordered to direct investigators not to ask questions about the to set group.

“Don’t look at the Bandito aspect of the case,” he was told. “Just focus on the booze and the fight.”

Burson said Villanueva’s then chief of staff gave him the order on behalf of the sheriff.

It didn’t occur to him at the time, but he said he now unwittingly feels used to cover up the Banditos’ involvement in the incident.

“Now do you feel like you’ve been used as some kind of unknowing con man to drop an investigation?” asked Bert Deixler, the attorney leading the commission’s investigation.

“I think that was me,” Burson said.

The disturbing testimony from a former senior executive added to other revelations that came to light at the commission’s hearings. Lawmakers with alleged ties to the groups have been accused of using violent and aggressive tactics and have cost taxpayers at least $55 million in settlements and payouts in incidents dating back to the 1990s.

Villanueva and his deputy, Undersheriff Tim Murakami, resisted a subpoena to testify Friday.

Villanueva’s attorney gave three reasons for his absence, Deixler said, including that he feared for his safety because members of the public had worn “F the Sheriff” shirts at previous hearings. Murakami told the commission that testifying would be too stressful and would pose an adverse health risk.

“I’m amazed that Undersheriff Murakami is able to perform the duties of an undersheriff but is unable to show up and testify for about an hour,” said Commissioner Robert Bonner, a former federal judge. “If he is unable to appear and testify, I suggest that he resign immediately, take an unpaid medical leave, or take other appropriate action as he has no business as undersheriff.”

Deixler said he learned that a sheriff’s associate who was a potential witness had been ordered by the department to sign a confidentiality agreement this week. Apparently, the agreement would have made it difficult for the employee to provide information. Deixler did not name the associate, but multiple sources identified him as Sgt. Jefferson Chow, who was working to investigate the attack and was told by Burson not to ask questions about the Banditos.

The sheriff’s department did not respond to questions about the non-disclosure agreement.

Deixler also asked the commission to approve a subpoena asking the sheriff’s department to keep all documents related to the investigation into the East LA assault, which stemmed from an incident in which a group of banditos allegedly attacked other deputies attacked at an off-duty party.

Larry Del Mese, Villanueva’s former chief of staff, also testified Friday. He said he doesn’t recall telling Burson not to ask questions about the Banditos or ever having a conversation with Villanueva about the group.

Such an arrangement would have been inappropriate, he said.

“Is that good police?” asked Bill Forman, another attorney who worked for the commission.

“Is it corrupt police?” Forman asked.

“Could be,” Del Mese said. “If he was trying to obstruct an investigation, I think it could be criminal.”

Prosecutors declined to bring charges against the MPs involved in the attack. Three MPs who were sacked for their role in the incident are trying to get their jobs back, according to witnesses on Friday.

Del Mese initially resisted answering questions about whether he belonged to any of the groups of MPs, citing his right to privacy. The commissioners pressed, and he eventually admitted he was a member of the Grim Reapers, a group stationed at the department’s now-closed Lennox station. He admitted to getting a grim reaper tattoo given to members of the group. The tattoos were numbered in the order they were received, and his was #22, he said.

“It was a fraternal group that worked hard and received some recognition from their peers,” Del Mese said. He said he doesn’t know what he did to get the invite.

“It served me no purpose from the day I got it, but obviously it had become a liability,” Del Mese said. Del Mese said he lasted six months as Villanueva’s chief of staff and was eventually transferred in part over a disagreement over Villanueva’s fight to reinstate an MP who was fired over allegations of domestic violence and dishonesty.

She said none of the deputies were found to have violated department guidelines and were not disciplined.

https://www.latimes.com/california/story/2022-07-01/sheriff-deputy-gang-hearing Former sheriff’s official says he was duped into covering up Bandito’s role in assault

The Morning After: Major League Baseball wants to deploy strike zone robo-umpires in 2024