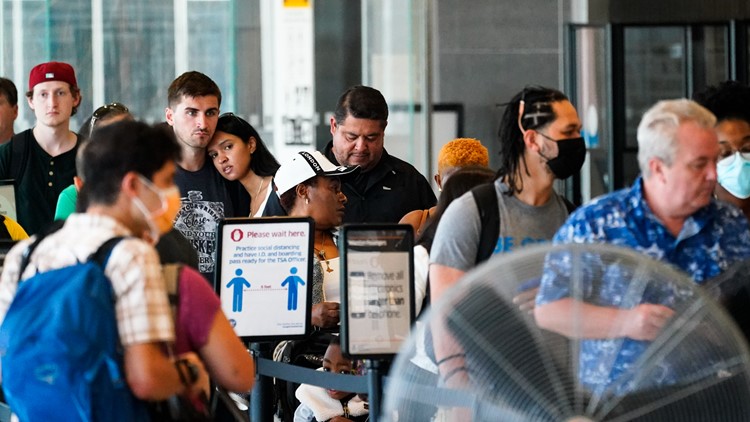 TSA said Friday it screened more people on Thursday than it did on the same day in pre-pandemic 2019.

WASHINGTON — The July 4 holiday weekend got off to a booming start as airport crowds topped pre-pandemic 2019 numbers.

Travelers appeared to face fewer delays and canceled flights on Friday than earlier this week.

The Transportation Security Administration screened more than 2.4 million travelers at airport security on Thursday, up 17% from the same Friday before July 4, 2019.

“We expect that (Friday) will of course be busy, and then Sunday will be very busy,” TSA Administrator David Pekoske said on NBC’s Today show.

AAA predicts nearly 48 million people will drive at least 50 miles or more from home over the weekend, down slightly from 2019. AAA says car trips will set a record even if the national average price of gas is around $5.

Holiday traffic has picked up again this year, and that means a particularly large number of people on the holidays.

With many flights sold out over the 4th of July weekend, airlines will struggle to find seats for passengers whose flights have been cancelled. Airlines advise customers to check the status of their flight before heading to the airport.

If you’re already at the airport when your flight is cancelled, “it’s time to put your multitasking skills to the test,” says Sebastian Modak, editor-in-chief of travel guide publisher Lonely Planet. He advises going straight to the airline’s helpdesk, checking the app on your phone and calling the airline’s customer service – an international number may be answered sooner than a US number for airlines that have both.

Modak said driving, or taking the bus or train, will often be the better option in the United States this summer.

“There’s no getting around the fact that this is going to be a summer of travel delays, cancellations and frustrations,” he said.

While vacationers crowd airports and roadside restaurants, business travel and international flights remain declining, and total air passenger numbers have not fully recovered to pre-pandemic levels. The TSA screened 11% fewer people in June than in the same month of 2019.

Thursday marked the 11th time since the pandemic began that the TSA screened more people than it did on the same day in 2019, and only the second time since February.

Airlines could almost certainly carry more passengers if they had enough staff. Many US airlines have cut their summer flight schedules after poor weather, flight delays and a lack of enough employees over Memorial Day weekend led to widespread cancellations.

As of Friday afternoon on the East Coast, airlines had canceled more than 350 US flights and delayed another 3,700. From June 22 to Wednesday, at least 600 flights were canceled and between 4,000 and 7,000 were delayed a day, according to tracking service FlightAware.

Roots of the Resistance: Understanding National Identity in Ukraine