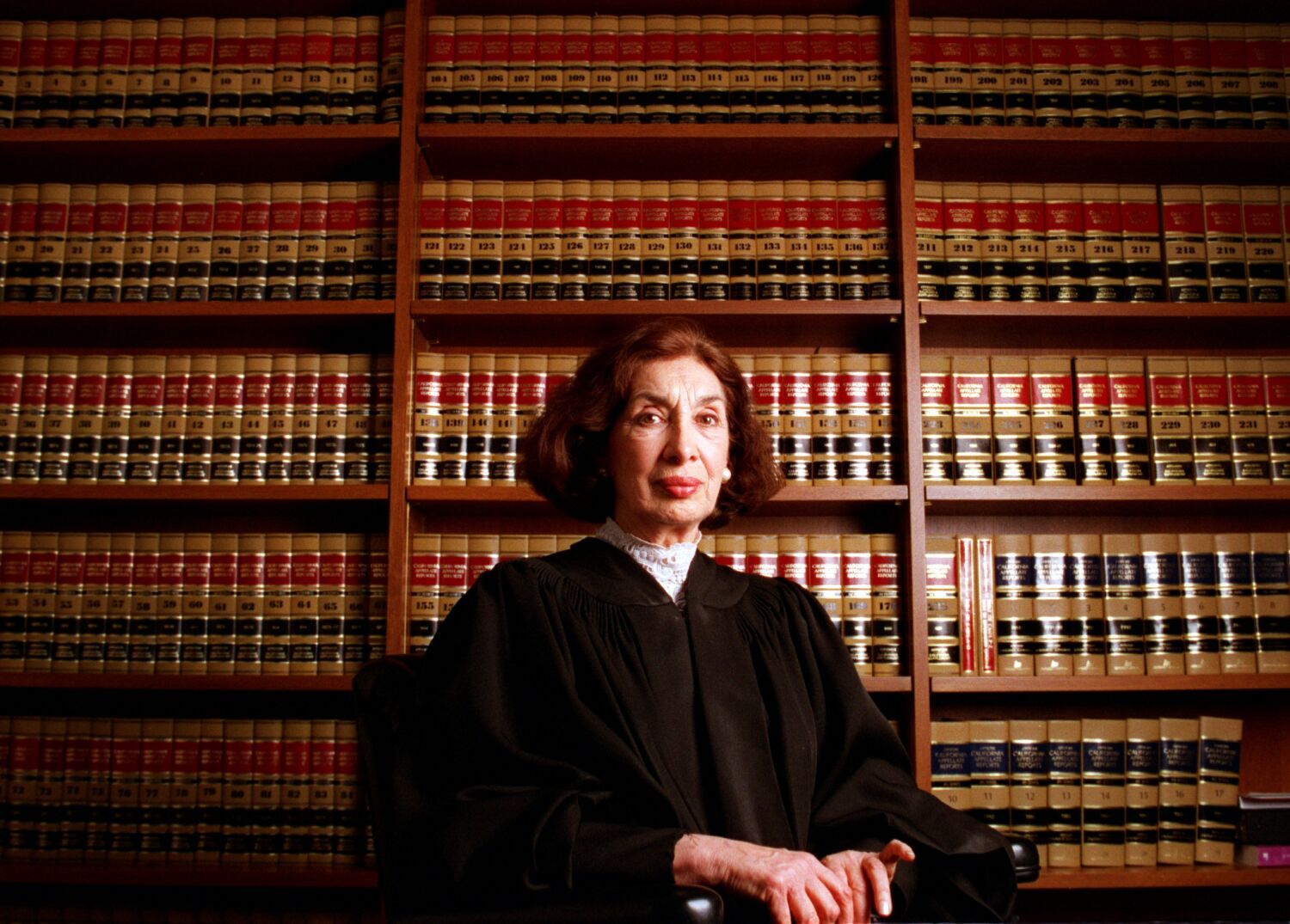 Before becoming the first Latina woman trial judge in California history, Frances Muñoz served as public defender in an Orange County courtroom, representing a young Latino boy during his arraignment in a criminal trial.

Muñoz tried to convince Judge Ken Williams, known for being a resolute and irreverent lawyer, that her client should be released of his own volition.

“If you are so sure that he poses no danger to society,” replied the judge, “I shall release him to you.”

Muñoz agreed and took the young man home with him – but hid her kitchen knives just in case. At the next court date, she reported that her client had not caused her any trouble.

The story of Muñoz’s daring, oversized heart became part of the lore of the Orange County courtroom, especially as it took its place on the bench and in history.

On January 25, 1978, Gov. Jerry Brown appointed her trial judge in the Harbor Judicial District in Newport Beach, a first for a Latina in California and perhaps the nation.

Muñoz, who served on the bench for 23 years before retiring in 2001, died of cardiac arrest Oct. 17 after a lifelong campaigning for justice, education and immigration reform. She was 92.

“I found her calm and level-headed,” said Frederick Aguirre, a retired Orange County Superior Court judge who counted Muñoz as a close friend. “She didn’t rush her decisions.”

The fifth of eleven siblings, Muñoz was born on September 17, 1930 in the mining town of Miami, Arizona.

Her father, a Mexican immigrant from the state of Jalisco, later moved the family to Puritan, Colorado, where he worked as a miner.

In 1941 the family moved again, this time to California, where they settled in Corona. The Muñoz children, including Frances, attended separate Mexican schools while their father worked as a harvest hand.

Because of the injustices, she was the first among her siblings to graduate from high school.

After that, Muñoz lived in Echo Park while running a furniture store in Los Angeles. She took night classes at Los Angeles City College while her brother Gregory moved in with her to attend UCLA.

Muñoz encouraged him to study law and helped fund his education through real estate investments she had made.

“She stuck the bug in my ear and kept it there until I graduated from law school,” Gregory told the Times in 2000.

At 40, Muñoz earned his own law degree from Southwestern University School of Law in Los Angeles after attending UCLA.

She followed her brother to Orange County, where he had opened private practice. In 1972, she became the first Latina and only the second woman to be employed by the county public defender’s office.

“One of our primary goals was to ensure that qualified and experienced Latinos were appointed or elected to the bank at this point,” Aguirre said.

Four years later, Brown made his historic appointment from Muñoz.

Aguirre believes that Muñoz was the first Latina trial judge in the country before Carmen B. Ciparik was later appointed to the New York City Criminal Court in 1978 by Mayor Ed Koch and the subsequent election of Judge Patricia Madrid in New Mexico.

Outside the courtroom, Muñoz devoted her free time to community advocacy.

From a humble office at St. Joachim Catholic Church in Costa Mesa, she helped scores of immigrants living illegally in the United States seek amnesty under the Immigration Reform and Control Act of 1986.

Muñoz showed a passion for youth through educational advocacy. She taught students at Madison Elementary in Santa Ana and started her own Extended Education for Excellence program in 1989.

“The organization that she founded not only gave me a scholarship, it gave me the confidence to believe in my education and in myself,” said Camilo Romero, who graduated from UC Berkeley in 2000 before becoming a lawyer and himself became friends with Muñoz.

Since 1993, $3.8 million in financial assistance has been distributed through approximately 2,600 scholarships.

“Richter Muñoz was a very influential advocate and knew how to bring together influential leaders to support first-generation students and their families,” said Monica Guillena, executive director of the fund.

Muñoz also co-founded the Luévano Foundation, a nonprofit group that provides scholarships to Latino students who otherwise could not afford to attend Catholic schools in the county.

“Francis believed that education is the most important thing in life for children and that family comes first,” said Vera Muñoz-Harrison, her sister. “She was honored to serve immigrants and the community.”

Gregory joined his sister when Governor Gray Davis appointed him a judge of the Orange County Superior Court in 1999. He served 14 years before retiring. He died last year at the age of 83 battling Parkinson’s disease.

Frances Muñoz continued as an assigned judge until she was 86. She has received numerous honors, including a lifetime achievement award from the Hispanic Bar Assn. of Orange County and a Spirit Award for Legal and Public Service Achievement from the California Latino Legislative Caucus.

Two years ago, Muñoz featured in a “Poderosas” mural project in Costa Mesa that honored Latinas, including labor leader Dolores Huerta and Sylvia Mendez, who integrated a Mexican school into Westminster after a landmark civil rights lawsuit.

“The wall honors her legacy as a proud advocate and judge,” said Romero, whose family home provided the brick wall that served as the canvas. “It served as a tribute to a woman whose humble nature otherwise belies her incredible life story.”

On her 90th birthday, Muñoz was surprised with an early reveal of her digital portrait by local artist Alicia Rojas.

“Being first is not as important as not being last,” Muñoz said that day. “The legal profession, particularly the Bar Association, still has a long way to go to reflect our community. Perhaps then the contributions of our immigrant families will be truly appreciated.”

Muñoz was never married and had no children. She leaves four sisters and 25 nephews and nieces.

Who Is to Blame for the Collapse of Afghanistan’s Security Forces?