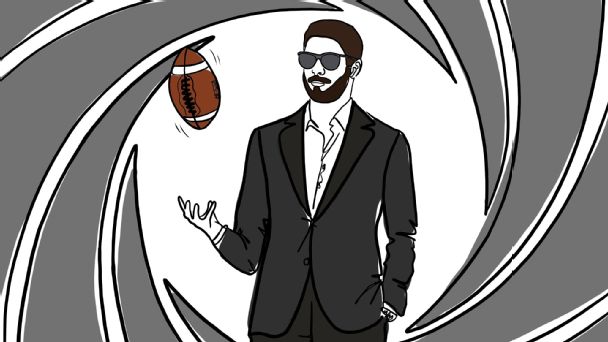 SANTA CLARA, Calif. — Much like her favorite NFL team, Rita Carvalho didn’t expect quarterback Jimmy Garoppolo to stay with the San Francisco 49ers so deep into the offseason. But for Carvalho, Garoppolo’s extended stay at the bay has turned a social media tribute into an affair of the heart.

Love for Garoppolo. Love for the Niners. love for her boyfriend. Above all, the love of art. All of this, combined with some inspiration from Major League Baseball’s lockout and the world of pop culture, led Carvalho — a 25-year-old artist living in Porto, Portugal — to draw Garoppolo every day until the Niners trade him .

When she made that decision on February 3, Carvalho, like most, believed it would mean a month or two of drawings. One right shoulder surgery for Garoppolo, a full free-agent stint, one NFL draft and one offseason program later, and Carvalho is so used to drawing Garoppolo that she can now do it from muscle memory.

Saturday was Carvalho’s 150th day, although it’s still unclear when the end will come.

“I thought he would be traded earlier,” said Carvalho, laughing. “I started working on something for the end, but then I stopped because I had to continue the daily drawing.”

While Garoppolo’s status and Trey Lance’s promotion to starting quarterback after being selected in the first round of the 2021 draft have been constant talking points this offseason, Carvalho’s drawings offered a fun respite from the speculation. The digital drawings, which Carvalho makes on her iPad using an Apple Pencil and a program called Procreate, show Garoppolo in a range of pop culture settings and often feature guest appearances from teammates, coach Kyle Shanahan and general manager John Lynch.

The feedback on these drawings was so positive that Carvalho and her boyfriend Filipe Sousa started a shop where customers can buy t-shirts, hoodies, prints and coffee mugs featuring their favorite drawings.

One of the most popular, according to Carvalho, is the The Lion King-inspired drawing, which features Garoppolo in place of Rafiki holding up Lance in the role of Simba. Another favorite is a homage to Titanic, in which Garoppolo and tight-knit George Kittle take Rose and Jack’s place at the helm of the doomed ship. Finally, an ode to “Dirty Dancing” in which Shanahan holds Garoppolo over his head also did well.

Garoppolo saw the drawings and made fun of them.

“Rita, I really appreciate it,” Garoppolo told San Francisco’s ABC 7 television network. “It’s really cool, just the uniqueness of it. We’ll see how many more you have to draw.”

While drawing Garoppolo on a daily basis may seem like a daunting task, especially as his situation persists, it has become an everyday staple for Carvalho and Sousa, both native Portuguese. In a way, it strengthened their relationship, which is only fitting since it was Sousa who introduced Carvalho to American football, the 49ers and Garoppolo.

The couple started dating two years ago. By that time, Sousa had already become a fan of the 49ers, having caught a random game in the early 2010s and doing post-game research on the team. To try to invest Carvalho in his passion for the Niners, he led them to Garoppolo.

“He said: ‘I think you will like this player,'” said Carvalho. “And he introduced me to Jimmy because he was handsome. So he thought I would like him.”

Sousa was right and the pair began following the 49ers together. Although there is an eight-hour time difference between the Pacific time zone and Porto, Carvalho and Sousa often stay up late to watch games. If it’s a prime-time game, they tape it and shut off all communication with the outside world for spoiler-free viewing the next day.

Shortly after Garoppolo said goodbye via a post-season Zoom press conference in early February, Sousa Carvalho said the Niners are preparing to trade Garoppolo. Carvalho studied art in high school and graduated from ESAD College of Arts and Design in Matosinhos, Portugal in 2021. To delve further into her art, she takes what she calls a “gap year.”

An avid reader and contributor to the 49ers’ Reddit page, Sousa Carvalho suggested making a drawing of Garoppolo and posting it on Reddit. There was no particular inspiration for this first drawing other than paying homage to what he did for the Niners. The response was overwhelmingly positive. Inspired by a baseball fan who drew Mike Trout every day during the MLB lockout, Carvalho decided to draw Garoppolo every day until he was traded.

Suggestions for further drawings quickly came in. Many fans from the United States have reached out, but requests are worldwide. Carvalho has received tips of encouragement and ideas from France, Germany, Ireland and Australia, among others. These suggestions were welcome as generating ideas has become the most time consuming aspect of this journey.

Almost every night, Carvalho and Sousa, 28, get together to brainstorm ideas and delve deep into pop culture and current events. It is no coincidence that most of these pop culture ideas are based on American shows and films. Sousa, who is a big fan of the drawings inspired by It’s Always Sunny in Philadelphia and Lethal Weapon, said that most shows, music, movies and even internet memes are just as popular in Portugal.

Once the couple has an idea, they will discuss different aspects of the drawing, where Garoppolo fits in and ways to add a personal touch to make it recognizable as their unique brand.

“It really brought us together even more because we talk about it every day now,” Sousa said. “It’s something we have to share. … I’m so proud of her.”

Mostly the drawings are made once a day, but occasionally Carvalho turns down a handful and sends them out daily over her phone. Each rendering takes Carvalho between half an hour and an hour, depending on how complicated it is. Like any artist, Carvalho has moments when things don’t work out and he may need to take a step back. However, she keeps coming back and trying to finish them off in one sitting.

Carvalho has drawn Garoppolo so many times now that she could basically do it blindfolded. The venture has given her plenty of practice for her dream job. She pays particular attention to Garoppolo’s famous jawline and eyebrows, of course, but says some other Niners like Kittle, receiver Deebo Samuel and full-back Kyle Juszczyk may also be from muscle memory.

“I really want to be an artist and I really gave it my all this year to just try to get my art out there,” said Carvalho. “And this was a good way to get feedback and start building a portfolio. … I never thought last year that these amazing people would text me that they love my art. I’m very, very grateful that I can do my art every day.”

How long Carvalho will continue to do so remains to be seen. Garoppolo is expected to be cleared to resume bowling in early July and a switch could follow soon after. Shanahan recently said again that he expects Garoppolo to be “most likely traded” after returning from his shoulder surgery.

Which of course raises the question of what Carvalho has planned for the grand final.

“People are really expecting something big at the end,” said Carvalho. “I can’t disappoint.”

https://www.espn.com/nfl/story/_/id/34122563/from-007-dirty-dancing-why-one-san-francisco-49ers-fan-drawing-jimmy-garoppolo-every-day-traded From 007 to ‘Dirty Dancing’

Newbie Diana To Be FIRED From Real Housewives Of Beverly Hills . . . Over ’Racism’ Allegations!! (EXCLUSIVE)