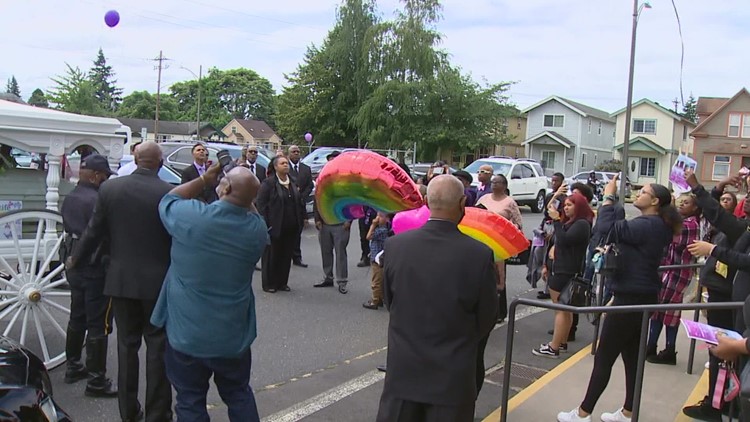 TACOMA, Wash. – It was an emotional morning at St. John Transformation Ministries as family and friends paid their respects to Iyana Ussery.

Ussery was shot dead on July 6 while sitting in a car at the intersection of Martin Luther King Way and South 19th Street.

Those closest to Iyana spoke about how much life and light she brought into her life and they shared their memories of the 14-year-old and how much she will be missed.

“She was a well-behaved kid, we talked about going to college, she was college-bound, it doesn’t matter where she grew up, she was focused,” recalls Jamee H., who was friends with Iyana’s mother, Kelsey . “It didn’t matter what was going on, she was focused.”

“We were just thinking about Iyana, I think the most common thing that came to mind was ‘gone too soon,’ gone too soon,” said Michael Knuckles, associate principal of Hilltop Heritage Middle School.

During his eulogy, Pastor Gabriel Madison spoke about how this act of violence spread to Hilltop.

“We understand the loss of this life and its meaning, and it seemed to spark a cry for justice and a cry for change in our community, and we definitely see the need for it,” Madison said.

Others called for action to be taken against the violence that led to Ussery’s death.

“We should be able to go to the store to get some snacks,” said James Watson of Tacoma Ceasefire. “We shouldn’t have to fear for our lives. We have to do better and we will.”

Now Iyana’s family begins the difficult work of bringing one of their youngest to rest.

But community members let them know they won’t be alone.

“We didn’t want to make a spectacle out of this,” Pastor Madison said. “We want the family to know that we love them, care for them and are there for them when the cameras are gone.”

So far, two suspects have been arrested in Ussery’s death. Both are 17 years old and both will stand trial as adults. Her charges include second-degree murder and two counts of first-degree assault.