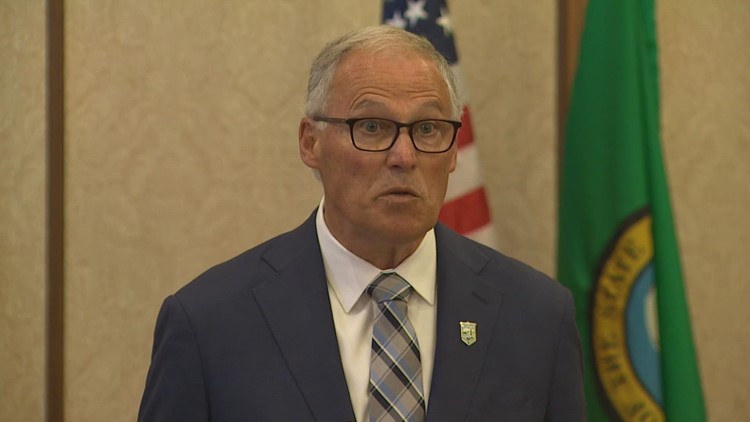 The governor spoke on several topics ranging from COVID to inflation.

OLYMPIA, Wash. – Gov. Jay Inslee spoke about a variety of issues and what he plans to do about them during a news conference Wednesday in Olympia.

First of all, COVID-19 was a major topic in today’s discussion and what can be done to help hospitals across the state.

The Washington State Hospital Association claims many hospitals are overwhelmed.

The association is requesting this help in a variety of forms, from additional funding to a change in guardianship laws.

Inslee said the problem really starts with there just not being enough people to do the job.

“Even if we had unlimited money but no nurse to do the job, you can’t solve the problem,” Inslee said. “So money needs to go into the center for qualified nurses and get them reimbursed, but also into the pipeline to train more people to do this work.”

Congress’ failed attempts to reach an agreement on climate change were also raised.

Inslee said that while this was unfortunate news, he encouraged Washington to become more proactive to ensure it does more to combat climate change and keep Washington clean.

“We have to face the reality: Mother Nature doesn’t judge by effort, she judges by results. And we still have work to do,” he said.

The conversation then turned to inflation, which is worrying many, according to a recent poll sponsored by KING 5.

This concern is still felt at the pump. Gasoline averages $5.20 a gallon in Washington, according to the AAA, and the state has one of the highest gas taxes in the country at 49 cents a gallon.

Some have called for this tax to be suspended to provide some relief. Inslee said this would not be productive compared to the other forms of relief.

“We’ve expanded funding for, and we’ve expanded access to, food banks that serve over 2.5 million Washingtonians. We’ve provided $1 billion in rent reductions to 79,000 homes, so over the last few months we’ve been doing things to help Washingtonian in a bigger way than in previous months,” Inslee said.

The governor said he understands the frustration many Washingtonians have when it comes to dealing with inflation, the pandemic and climate change, and will continue to seek effective solutions to help people make ends meet come.