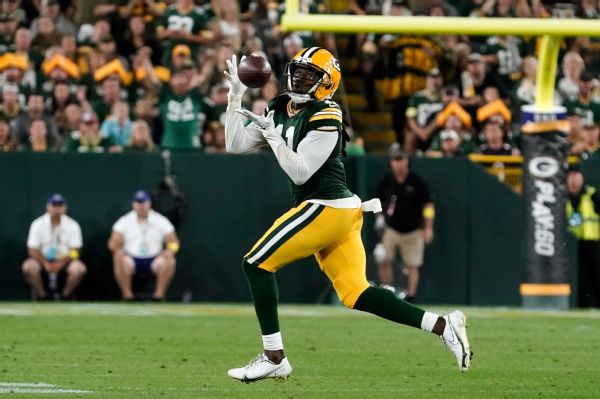 The Packers certainly won’t have Sammy Watkins, their leading wide receiver in two games, because of a hamstring injury. Two of their other top receivers, rookie second-round pick Christian Watson (hamstring) and veteran Randall Cobb (illness), were ruled questionable on Friday.

The only one of the Packers’ top four receivers cleared for the game and taken off the injury report is Allen Lazard, who was limited from practice this week with the ankle injury that kept him out of the season opener. Lazard returned to the game against the Chicago Bears last week and is the only receiver on the roster to have a touchdown this season.

The Buccaneers already knew earlier in the week that they would be without leading wide receiver Mike Evans after he was suspended for a game over last Sunday’s altercation in their game against the New Orleans Saints. Tampa Bay will also have no receiver Chris Godwin, who was out Friday with a hamstring injury. Meanwhile, Julio Jones (knee) was listed as a doubt.

The Packers could also be without one of their top tight ends, Marcedes Lewis (doubtless with a groin injury). Left tackle David Bakhtiari, who is yet to play in the 2022 season, has also been ruled questionable as he attempts to return from multiple knee surgeries.