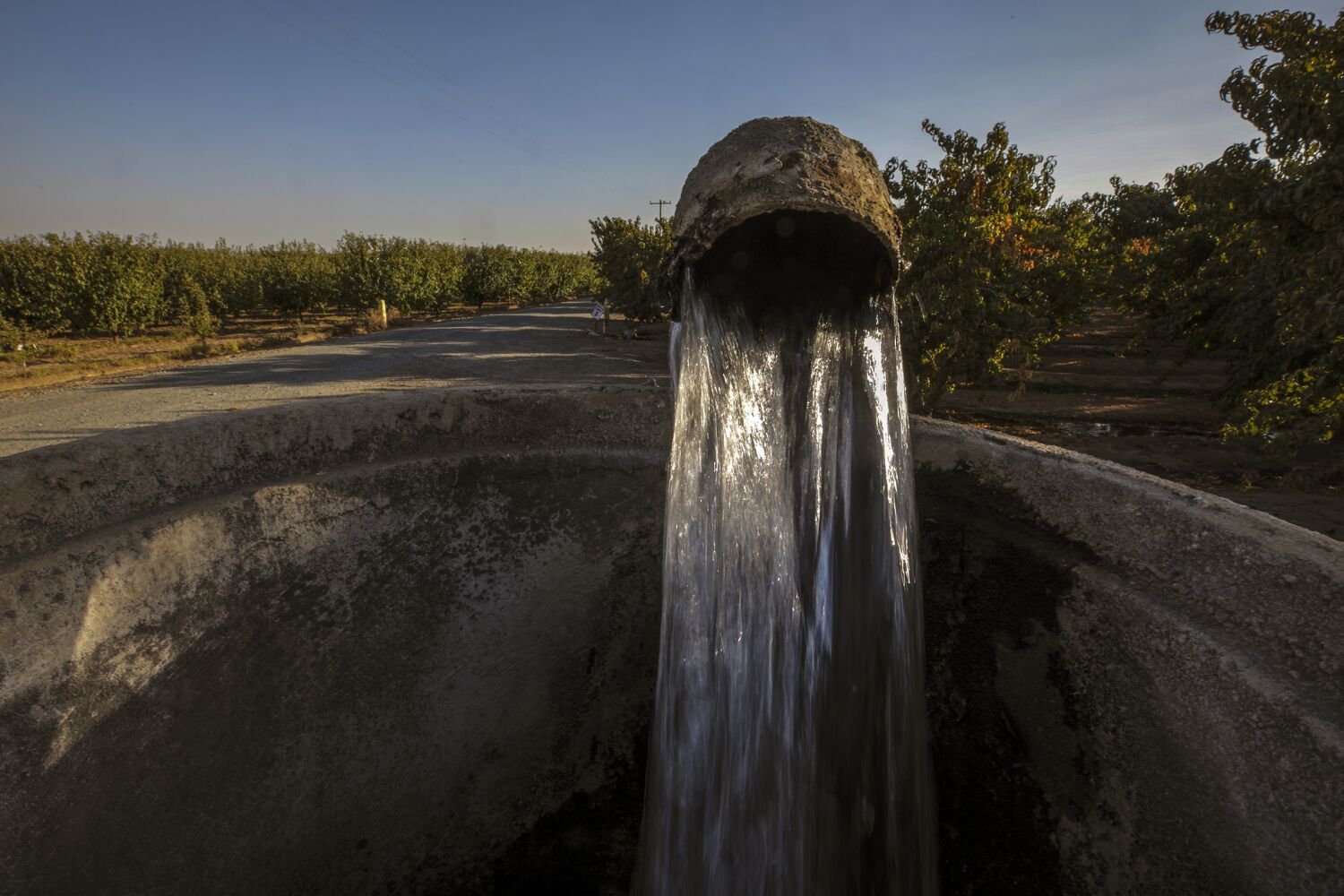 Scientists have found that the pace of groundwater depletion in California’s Central Valley has accelerated dramatically during the drought, as heavy agricultural pumping has lowered water tables to new lows and now threatens to deplete underground water reserves.

Research shows that the chronic decline in water tables that has plagued the Central Valley for decades has worsened significantly in recent years, with a particularly rapid decline since 2019.

“We have a real crisis,” said Jay Famiglietti, hydrology professor and executive director of the University of Saskatchewan’s Global Institute for Water Security. “California’s groundwater and the groundwater in the US Southwest is disappearing much faster than most people realize.”

Famiglietti and other scientists found in their study, published this month in the journal Nature Communications, that the rate of groundwater depletion has been 31% higher since 2019 than during the last two droughts.

They also found that Central Valley groundwater losses since 2003 have been about 36 million acre-feet, or about 1.3 times the full water-storage capacity of Lake Mead near Las Vegas, the country’s largest reservoir.

“The path we’re on right now is a path to 100 percent disappearance,” Famiglietti said. “This is the water for future generations. And it disappears.”

California’s historic Sustainable Groundwater Management Act was passed in 2014 with the intention of curbing overpumping and stabilizing water tables. But the law, known as the SGMA, gives many local authorities until 2040 to meet sustainability goals.

Famiglietti said the results suggest the timeline could be far too long, pointing to the need to accelerate implementation of the legislation. The current rate of groundwater loss is now nearly five times faster than the long-term average since the 1960s.

“We’re seeing an apparent rush to pump as much groundwater as possible before new restrictions take hold,” Famiglietti said. “My fear is that by the time SGMA is fully implemented it will be too late. There will be nothing left to manage.”

The groundwater rush comes amid the driest three-year period on record in California and a major mega-drought, exacerbated by global warming, that has blanketed the American Southwest for 23 years.

During droughts, when less water is available from rivers and canals, Central Valley agriculture typically depends on groundwater for two-thirds or more of its water supply.

The research involved analyzing nearly two decades of data from two NASA satellite missions, the most recent of which is dubbed the GRACE Follow-On. Launched into orbit in 2018, the pair of satellites track changes in the Earth’s gravitational field to measure shifts in total water amounts above and below the Earth.

The scientists examined additional data on soil moisture, surface water and snow cover to estimate groundwater losses and compared their results to estimates from a computer model developed by the US Geological Survey. They compared the current drought from September 2019 to December 2021 with previous largely dry periods of 2006-2011 and 2011-2017.

Data for the past two decades show successive declines in mean water levels in a stair-step pattern, with brief rainy spells slowing the decline only temporarily.

“Water stress levels in California are getting higher,” said Pang-Wei Liu, NASA scientist and lead author of the study. “The groundwater depletion rate is getting faster and faster, especially in these five, ten years.”

The Central Valley is one of the most important agricultural regions in the world, producing almonds, pistachios, grapes, walnuts, tangerines, rice and other crops, as well as beef and dairy products.

The accelerating pace of groundwater decline has coincided with shifts in crops. The state’s harvested almond orchard area has grown from 760,000 acres in 2011 to 1.3 million acres in 2021, according to federal data. Farmers have also planted more pistachio orchards.

Famiglietti said he thinks the recent acceleration in water level decline is likely to be caused, at least in part, by farmers planting lucrative orchards and drilling deeper wells “before the hammer drops,” with restrictions under the Groundwater Act. Since the passage of the SGMA, thousands of new agricultural wells have been drilled in the valley.

The push to drill more irrigation wells and rely more on groundwater has caused problems for shallower domestic wells. More than 1,400 dry wells were reported to the state this year, the highest number since officials began tracking reports of dry wells in 2013.

The research shows it’s critically important that California accelerates implementation of the law that requires local authorities to develop groundwater plans and make progress toward their goals, said Felicia Marcus, a Stanford University researcher who previously worked headed the State Water Resources Control Board. She said the study is a “bright reminder that we need to act and that we need to have a framework that allows people to act.”

Curbing overexploitation is crucial, she said, as climate change brings with it more frequent and intense droughts.

“With SGMA, we have hope for a future where the children and grandchildren of the people of the Central Valley can farm and live,” said Marcus. “The framework and the regulation will be crucial.”

Meanwhile, people in the Central Valley’s rural communities continue to suffer the consequences as more and more wells bubble up and dry up. Many residents living with dry faucets have relied on bottled water, household tanks and truck-delivered water while waiting for solutions.

Due to the drainage of the aquifer, parts of the valley floor are sinking. When falling water levels leave underground spaces in layers of gravel, sand and clay, the bottom collapses and permanently reduces the water storage capacity of the aquifer. In parts of the valley, the land has subsided about 1 foot each year, a problem that has damaged canals and wells.

“California has lost water and groundwater is the reason,” Famiglietti said. “It really is the tragedy of the commons.”

The scientists analyzed trends in three areas of the Central Valley — the Sacramento, San Joaquin, and Tulare Basins — and found that the northern Sacramento Basin, which has previously performed better than the southern areas, is also experiencing groundwater depletion.

“The vast majority of California water is groundwater. The fact that it’s disappearing at rates nearly five times faster than historical rates is the equivalent of unlimited withdrawals from a bank account,” Famiglietti said.

This water savings account, he said, is vital to weathering droughts and a critical resource for California’s future. He said slowing the pace of abstraction is essential to conserving groundwater for future generations.

Famiglietti, the study’s lead investigator, was a former senior water scientist at NASA’s Jet Propulsion Laboratory. In previous research, he and other scientists have used NASA satellite measurements to assess how rapidly groundwater is being withdrawn in California and throughout the Colorado River Basin. He has studied groundwater depletion in food-growing regions around the world, from South Asia to the Middle East to the Ogallala Aquifer below the Great Plains.

In January he will take up a new position as a professor at Arizona State University.

In many parts of the US and other countries, groundwater continues to be poorly managed or not managed at all. As wells continue to lower water levels, the drop in water levels goes largely unnoticed and underestimated. Using satellite measurements to track groundwater, Famiglietti and other researchers have identified widespread and worsening problems of depletion in many of the world’s major food-producing regions.

Famiglietti said a guiding goal of research is “to make the invisible visible.”

The data paints a bleak picture, he said, in California and across the Southwest.

“The pace and magnitude of its disappearance far exceeds what any management system can replace,” Famiglietti said. “If this groundwater disappears, so does food production. That means fewer products, food shortages, higher food prices.”

He said many more people are also at risk of losing access to safe drinking water as falling water levels are causing more and more wells to dry up.

California’s groundwater law promises to eventually place restrictions on agricultural water use in the Central Valley if local authorities implement their groundwater sustainability plans. For now, pumping has yet to fall under restrictions in most areas.

According to the law, sustainable groundwater management is defined as managing the water supply in a way that can be maintained without “causing undesirable consequences” such as: B. a chronic decline in groundwater levels. Researchers have said that addressing the groundwater deficit may require taking large swathes of farmland out of production.

Famiglietti said he believes California has a historic opportunity to manage and conserve Central Valley groundwater before it’s gone.

“It’s going away fast,” he said. “This could be our last chance in California to get it right. And so we have to make sure it works.”

https://www.latimes.com/environment/story/2022-12-22/groundwater-depletion-is-accelerating-in-the-central-valley Groundwater depletion is accelerating in the Central Valley

Queen Elizabeth mourned at a tumultuous time in Britain