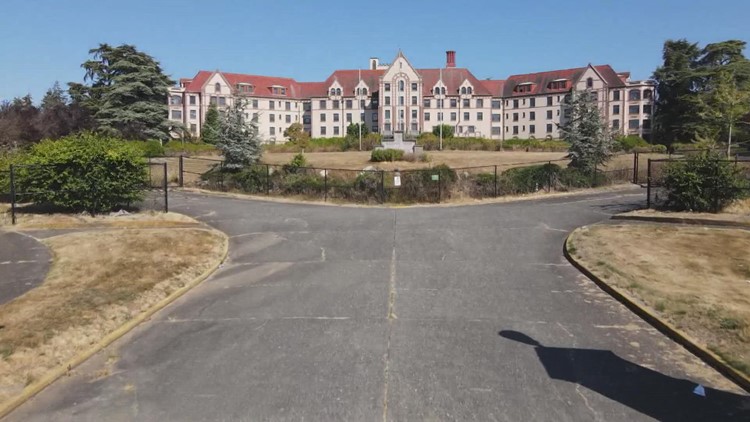 A conversion of the building would require a significant investment, but many see potential in the nearly 100-year-old structure.

DES MOINES, Wash. – With a demolition proposal filed with the city, groups are hoping to save the Masonic Home of Washington, also known as the “Landmark on the Sound.”

“It just impresses you,” said Lloyd Lytle Jr. of Des Moines when describing why he felt the 1926 building should be saved. “It’s important for cities to have places that inspire people and move the soul.”

The building was once a retirement facility for Washington’s Masonic Societies. It was converted into an events center in the early 2000s but was put up for sale in 2013. Since then it has been empty.

The Washington Trust for Historic Preservation announced that the property was sold to EPC Holdings LLC in August 2019 for $11.5 million and transferred to Zenith Properties LLC in November 2019. In 2020, the company applied to the City of Des Moines for a demolition permit. The application is currently being examined.

“We’re waiting for that to see if the developers and the city can find a consensus on the impact of the building on the climate, the environment and historical resources, to say, ‘Yes, it can be demolished or we have to slow down and consider alternatives,” said Huy Pham, program director for the Washington Trust for Historic Preservation.

The Washington Trust for Historic Preservation has listed the building on its website as one of Washington’s “Most Endangered Sites”.

“Don’t you think the worst thing you can do to a building is tear it down?” said Pham. “This is the ultimate form of vandalism.”

Converting the building would require significant investment. However, Pham and Lytle are two of many who see potential.

Lytle started the Preserve Landmark on the Sound petition. He said more than 1,400 signatures had been collected since the end of June.

“I just saw a lot of separate groups saying, ‘Yeah, let’s keep it. We love this place too,’ but no one was connected,” Lytle said.

The visions for the building range from apartments to art galleries to office space.

Des Moines is currently accepting written public comments for the demolition proposal. Comments can be submitted until August 25 at 4:30 p.m.

How 'Pretty Little Liars: Original Sin' made A even scarier

City of Tacoma transfers ownership of Union Station to feds

Univision Mujer de Nadie Spoilers: Casilda’s about to get what’s hers. Plus, Lucía will learn a horrible truth