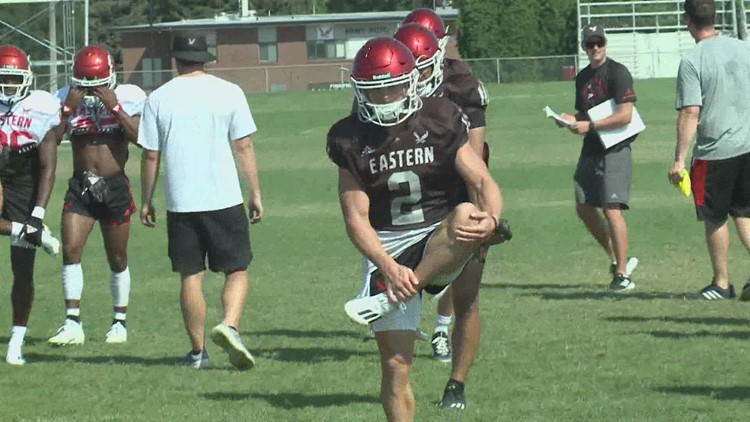 Gunner Talkington will lead the Eagles’ offense into Saturday’s week one matchup against Tennessee State at Roos Field.

Talkington had two excellent quarterbacks to watch and learn from during his time at EWU in Barrier and Gage Gubrud. He thinks he’s ready to run with this opportunity.

“Over the past few years, I just had to be the best teammate I could be. Now that I’ve finally got my chance, I’ll try to take full advantage of it,” Talkington said.

Talkington isn’t the only newcomer to the EMU offensive this year. Offensive coordinator Jim Chapin is also in his freshman year as a calling plays. Talkington believes in a simplified approach to success this season.

“Doing my job is the most important thing. I just want to keep the ball in our hands,” said Talkington.

He’s still gearing up to become the vocal leader of the offense.

“I try and do what I can and bring good energy to the exercises. I think I’m a good leader by example, but at the same time I try to be a vocal leader,” Talkington said.

Head coach Aaron Best has been impressed with Talkington throughout fall camp and believes he is the right choice to lead this team.

“I’m excited for his opportunity to take advantage of this and run with it. A game will not define anything for anyone, even if the world will tell you otherwise. He’ll be fine and Coach Chapin will use him in good situations,” Best said.

EWU fans will get their first look at the Talkington-led offense at Roos Field on Saturday when the Eags take on Eddie George’s Tennessee State Tigers. The game is scheduled to kick off at 1:05 p.m.

“I know everyone on the team is really excited to beat someone else this week, so the energy is high right now and I’m just looking forward to everything,” Talkington said.