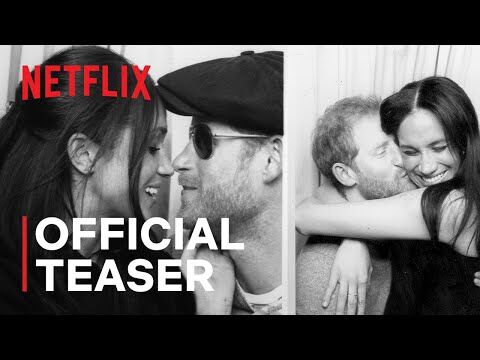 There are only about three lines of dialogue in the first teaser for Harry & Meghan – Prince Harry and Meghan Markle’s lengthy and speculated Netflix project – but there’s plenty of excitement to kick off the new docuseries.

“Why did you want to make this documentary?” asks a person from the off, while happy black-and-white images of the young couple flash on the screen. On display are private moments, including selfies and photo booth shots, never-before-seen photos from their royal wedding in 2018, the Duchess of Sussex’s pregnancies and moments when the off-duty royals relaxed at home in Montecito, California (earlier this week , Meghan shut down the mere mention that she would be taking part in a “Real Housewives of Montecito” spinoff.)

But the answer to the loaded question does not come immediately. Instead, tension and weariness grow in the on-screen imagery as the embattled couple navigates the tense reception of their marriage and viewers witness Harry’s growing ambivalence towards the crown, ultimately leading to their stepping down as working royals in January 2020.

“Nobody sees what goes on behind closed doors,” says Harry, adding, “I had to do everything I could to protect my family.”

The teaser, which builds on the drama the couple simultaneously dodged and embraced, also includes glimpses of Harry’s brother Prince William – who is now first in line to the British throne – and his wife Catherine at formal events and a peek at newspapers , which are being printed as a nod to the tabloid war that has raged over the Sussexes in Harry’s home country and abroad, and a clip showing the former ‘Suits’ actor standing by his side, wiping away tears.

“When the stakes are so high, doesn’t it make more sense to hear our story from us?” adds Markle, who grew up in LA.

The streaming giant, which signed the couple to a massive deal in 2020, didn’t announce a release date for the show, simply describing it on Thursday as “a global Netflix event” that’s “coming soon.” The documentary series was previously thought to be a possible reality series, although the Sussexes have danced around the rumour.

Harry & Meghan, directed by Liz Garbus and produced in part by the couple’s Archewell Productions, is the couple’s latest project, which promises a glimpse into the lives of the shielded royals following their move from England to Southern California and since their bombshell interview with Oprah Winfrey in March 2021.

Other such projects include Meghan’s Spotify podcast Archetypes, which launched in August, and Harry’s much-anticipated memoir Spare, which debuts January 10.

Here’s a look at the synopsis of the series, direct from Netflix:

“In an unprecedented and profound documentary series, the Duke and Duchess of Sussex share the other side of their high-profile love story. Over six episodes, the series explores the clandestine days of their early courtship and the challenges that led them to feel compelled to step down from their full-time roles at the institution. With commentary from friends and family members, most of whom have never before spoken publicly about what they saw, and historians debating the state of the British Commonwealth today and the Royal Family’s relationship with the press, the series does not shed light just a couple’s love story, it paints a picture of our world and how we relate to each other. From the critically acclaimed, twice Academy Award-nominated and Emmy-winning director Liz Garbus, ‘Harry & Meghan’ is a never-before-seen look at one of the most talked-about couples in history.”